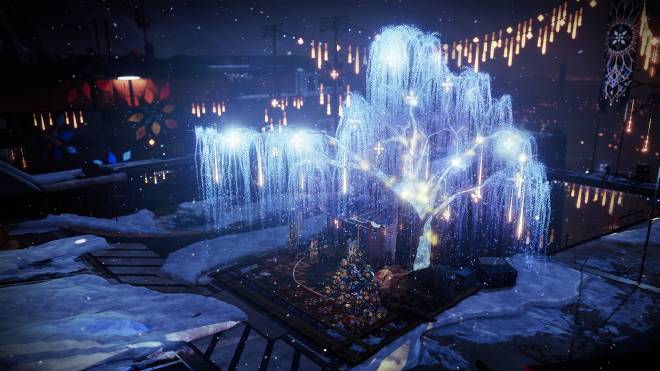 #TWAB // ❄️ bung.ie/2KhufmL This week at Bungie, Hawkmoon, next-gen, and the Dawning, oh my! OK, so it’s been another action-packed week with updates to the game and news about the future, so let’s just get into it. We started off on Tuesday with an early morning dev update on the state of rewards in the game. We wanted to share some of the plans to improve rewards as well as a few other exciting things coming up. The whole update (https://www.bungie.net/en/Explore/Detail/News/49957) is definitely worth a read, but I stole some bullets: • In Season 13, we’re adding six new Legendary weapons to our ritual activities, two each for strikes, Gambit, and Crucible. • In addition to the weapons above, Nightfall strikes are getting three unique weapons, with The Palindrome, The Swarm, and Shadow Price all making their Destiny 2 debuts. If you’re brave enough to take on Grandmaster Nightfalls, you will be also able to earn Adept versions of these weapons. • Transmog will be coming with Season 14. More details to come. • DDoS protection for Destiny 2 players on all consoles will be coming in Season 13. • The Vault of Glass raid returns in Year 4. • Crossplay is coming in 2021. • Two strikes (Fallen S.A.B.E.R. and Devil’s Lair) are coming to Destiny 2 in Season 13. • Legendary and Master Lost Sector rotation will be expanded to include the Lost Sectors on the Moon in Season 13, and there will be new three new pieces of Exotic armor to chase. That very same day, Update 3.0.1 (https://www.bungie.net/en/Explore/Detail/News/49928) went live with several important fixes as well as next-gen enhancements for consoles so you can experience the beauty of Destiny 2 with moar frames and moar FOV! We wrote up an article that covers these new enhancements in detail as well as the new ability to pick up bounties from the Companion App and the return of the Prophecy dungeon: https://www.bungie.net/en/Explore/Detail/News/49925 This week also saw the return of Hawkmoon. The highly sought-after Exotic Hand Cannon makes its debut into Destiny 2 with a reworked perk that no longer relies on RNG but still packs a punch. Season Pass owners can now visit Spider to set off on the quest to claim their Hawkmoon: https://youtu.be/IvEa4m7k_WU