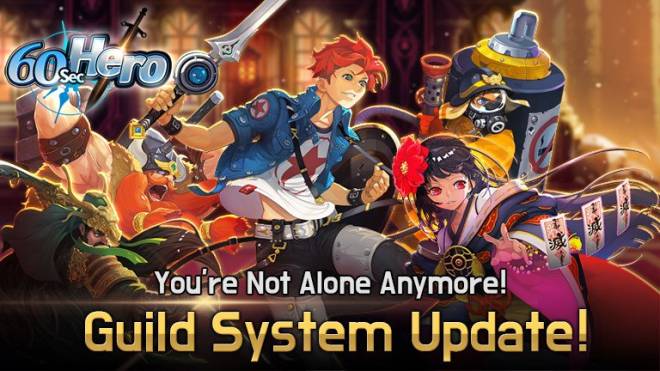 There will be various features, buffs, and rewards!     ▶ Let’s learn about the Guild, one by one. Tap on [Guild] button at the bottom of the screen to access Guild Tab.   You can either create the guild with 300 Diamonds or join another guild for free.     ▶ Guild Creation / Guild Settings 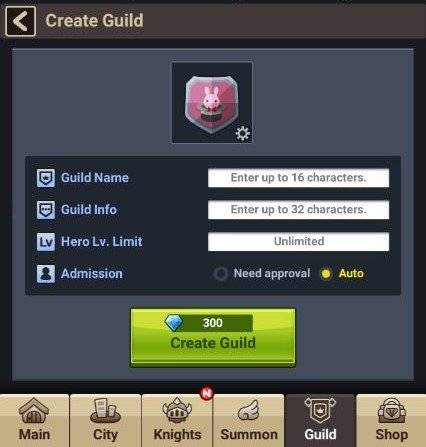 There are four things to set when you first create the Guild: 1) Guild Name, 2) Guild Info, 3) Hero Lv. Limit, and 4) Admission.   1) Guild name CANNOT be changed! Please double check when you name the guild.   2) Guild info is the description of the guild. Elaborate about the guild to gather other heroes out there!   3) Hero Lv. Limit is the required Hero Level to join the guild from 0 to 65.   4) There are two Admission types: 1) Auto and 2) Approval-based.   ※ Maximum number of Guildsmen is 21 at Guild Lv.1, and the number can be increased up to 40 as the Guild Level increases.     ▶ Guild Chatroom 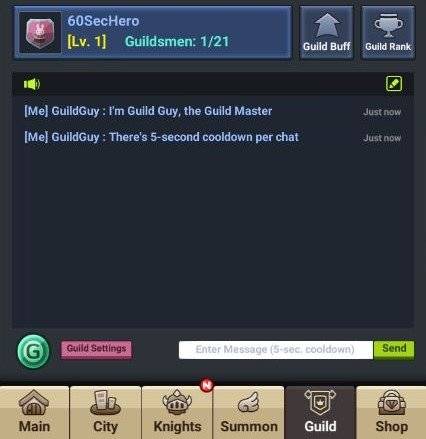 There is a little chatroom for all guildsmen to talk with each other.   Length of each chat is limited to 40 bytes, and each chat can be sent once every 5 seconds.   Only the guild master can set the Notice at the top of the chat.     ▶ Guild Level and Weekly Guild Reward 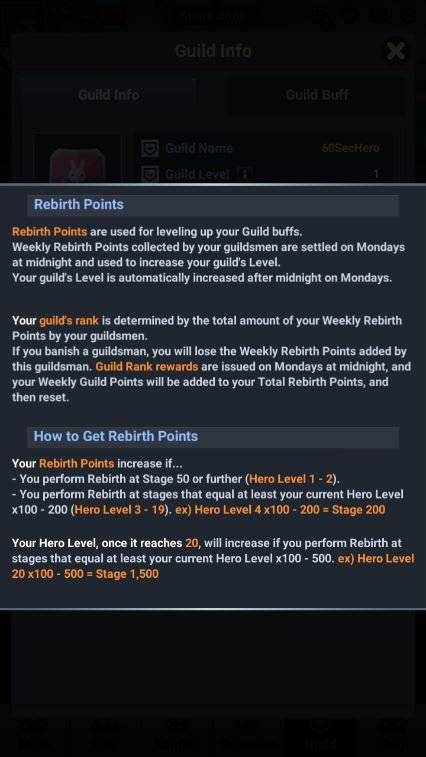 You can check the information about Rebirth Point at information window by tapping on [i] button next to Guild Level.     ▶ Guild Buff 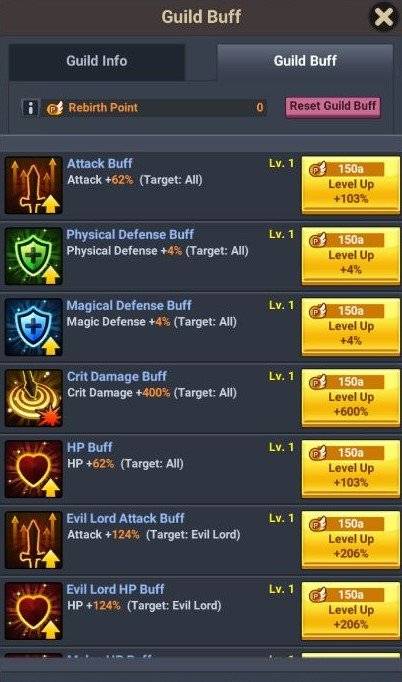 There are many different Guild Buffs in the game.   Every guild member can receive basic Guild Buffs just by joining the guild, and the levels of Guild Buffs can be increased with enough Guild Buff Points.   Max Guild Buff Level is currently 6 and the number may be increased in future updates.     ▶ Guild Shop Tap on [Main] → [Market] → [Guild Shop] to access Guild Shop.   Just look at all the things you can get!   Guild Shop offers 5-star Knights’ Soulstones, 4 to 5-star Knight Gacha Ticket, and Special Rank-up Ticket.   You can buy 2 Special Rank-up Tickets every month! Isn’t that just great?   Joining a Guild looks pretty charming now, doesn’t it?     ※ Caution: You cannot join another guild for 24 hours after you leave a guild.       Hope you enjoy the day with 60 Seconds Hero! Thank you.