Hello Heirs! I'm here to give you some tips about defeating Forest Shadow of Wrath, Odette.     This boss is quite easily done with a full team of Nat 5 lvl 60's with the exception of your tank, which is preferred to be at least level 64 with a full gear set lvl 15's. 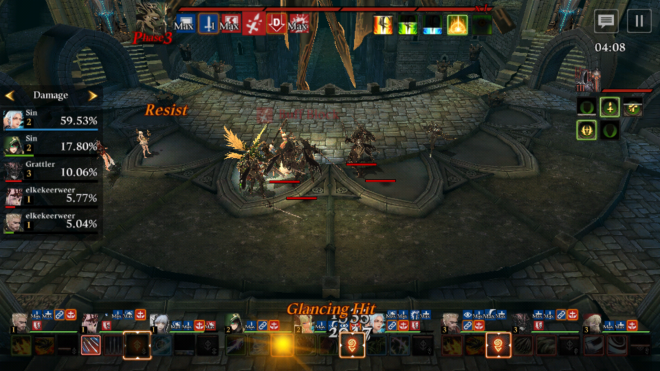 As you can see in the damage tab it's mostly a guild mate carrying me and that's okay. They're way further in the game than I am and that said it may be profitable for you to join a guild with some level 60 members! Which helps you defeat PR on even higher levels (trough their support teams).   If your reading this most likely your biggest nuance will be Odette's (AoE) annihilation skill. Easily countered is to have 2 debuff skills since they bring down the total damage. In the screenshot above you see 2 debuffs that come in very handy: 'Def down' and 'Increased damage received'. Those simultaneously also lets your DPS do allot more damage!   Easily obtained 'Increased damage received' would be the servant Xita which can now be found in the shop. Which also happens to be fire! You shouldn't have any problem with def down servants (I hope).   Attack down on the boss is also nice if you have a low level tank.   As for your damage dealers a mixture of SPD/DEF/ATK would be preferred. Like it says in the menu ;) A servant with AoE would also be nice when the boss summons minions but for F2 not necessary, it just speeds things up and most likely there will be less burden on your tank.   2 tips if you're playing with live players:   1. 1 tank is enough (for f1-2) if its 64+, even if you don't have another DPS servant, a healer or support -even low level- would be better. Look for extra buffs to put on other servants and/or debuffs on the boss (note that the boss has a very high resistance against damage over time (Also Petrify, Stun, Silence, Fear and Skill Gauge Down but these won't help against the annihilation skill anyway)).   2. If you're low level don't be scared to join in with others. I wouldn't mind someone in my team that dies in the first 3 seconds. Although some people prefer to do things quick and will kick you, like i said before you'll always have one in the team that seemingly caries you thanks to a much stronger servant. As i have a strong tank myself that can easily tank F2 I never minded weaker Heirs.   Thanks for reading and happy holidays!   Player ID: 10012451480 Crusade Name: elkekeerweer Sercer: EU