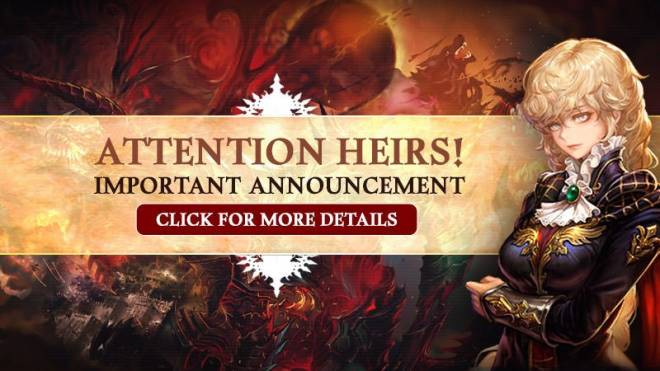 Greetings Heirs,   We would like to notice all Users with issues found after the 7/22 CDT, 3.5 Update. Please see below for more details on the v3.5 Update Known issue and we apologize for the inconveniences.   Details: Issue # 1: "Full-Screen Aspect Ratio" Issue Details: > Issue where the app would not use "Full-Screen Aspect Ratio" for certain devices after 3.5 Update.   Solution: 1. Launch "Game Launcher" on Android 2. Launch Heir of Light 3. Scroll down the screen to access the Android background tab. 4. Look for "Game Tools" 5. Click "Advanced Game Feature" 6. Click "Full-Screen App" 7. Search "Heir of Light" and press "allow"   Issue # 2: Global IPvP Record Display Details: > Issue where the opponent's IPvP Win Record would display as "0" during the start of the match.   Issue # 3: Avatar Preview Display Details: > Issue where the previewed Avatar model would continue to display when exiting the Preview mode by pressing the back button on Android Devices.   Issue # 4: Game Guide Quest Details: > Issue where the Level Up Quest (# 4 & # 6) in Game Guide quest won't complete even after fulfilling the quest requirements.   Issue # 5: Irregular Display Details: > Issue where the display would not appear correctly when device's region and languages are not unified with each other.   List of regions that experience Irregular Display Issue: > Device Region: Vietnam - Language: Vietnamese > Device Region: Germany - Language: German > Device Region: France - Language: French > Device Region: Spain - Language: Spanish * Please make sure to unify device's region and languages for users playing from regions listed above.   List of regions that are not affected by Irregular Display Issue: > Japan > Thailand   Issue # 6 Log In Issue using Facebook App Details: > Issue where you cannot log into the game using Facebook App. > Temporary Solution: You can log into the game using Facebook by selecting "Log into Facebook using [Phone Number] or [Email]" option on Facebook   Issue # 7: 6 Star Servant Achievement Reward Attendance Issue Details: > Issue where the 6 star servant achievement reward attendance pop up is not visible in the game. (Rewards are delivered even though the 6 star achievement reward attendance is not visible)   We are trying to resolve issues that are found after the 3.5 Update as soon as possible.   We will make another announcement when we have resolved this issue. We apologize for any inconveniences that you may experience due to the 3.5 Update Known Issue.   Thank you