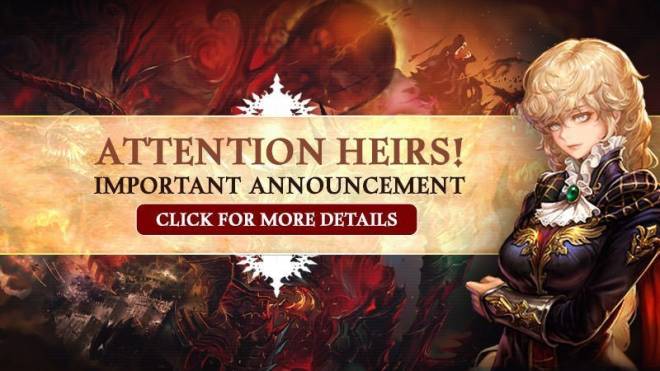 Greetings Heirs,   We would like to notify all users that a v4.1.5 has been released for Android to resolve issues that were found after the 4.1 Update. We recommend Heirs to download the newest version of Heir of Light for pleasant gameplay experience.   Please note that the v4.1.5 for Android has been released first due to the Apple approval process. We will make an official announcement once the v.4.1.5 for iOS is released.   Please see below for the v.4.1.5 patch release details   v4.1.5 Release Date (Android): > 3/31 2:40 AM CDT   v4.1.5 Patch Details:   > Issue where the Servant's Marks were not saving in the Party Raid has been resolved. > Issue where the Servant's Marks were being applied incorrectly based on the position of the team has been resolved. > Issue where the last played servant's marks are loaded instead of saved servant marks per floor has been resolved. > Issue where the Boss would not appear and would not proceed to the next battle phrase if the battle phrase ends due to the Forest Oracle's Bomb Damage has been resolved.   Please make sure to update the app to the 4.1.5 in the Google Play Store before logging into the game.   We apologize for the inconvenience that you may have experienced due to the 4.1 known issue and we will try our best to bring the best gaming experience to all Heirs   Once again, we will notify all users once the v4.1.5 has been released on iOS.   Thank you.