To start off, I accidentally posted this on the wrong board. At the time of writing this, the post will not qualify for the “Tips” event. Regardless, I still want to share this advice with my fellow heirs. Tip #1 Nat 3*s are great for new players because they’re common and relatively simple to build. Here are the nat 3*s that I believe every new player should focus on: Dark Dunk: great healer; has a def and heal block de-buff for enemies; special skill gives a 20% skill boost to allies; has a 15% spd boost passive for the party. Light Dunk: Has a light DoT; de-buff removal; a “damage increased” de-buff for enemies; and a passive that gives a 15% hp increase for all allies. Light Moira: similar to Dark Dunk but has an attk de-buff for enemies and a glancing hit rate buff for allies; Special skill also gives a 20% skill boost. Light Gretel: Is an ignore def dps; enemy def de-buff; passive skill increases attk by 30% when hp is below 30%; all she needs is lots of attk and some spd. Tip #2 Do not use vamp on tanks. At lower levels, putting vamp gears on tanks may be temporarily viable in place of a healer. However, you’ll quickly find that your tank is either: A. Not doing enough damage to adequately heal itself. or B. Too squishy. Personally, I prefer a combination of hp and def on most tanks, with an emphasis on resist subs. Of course, there are some exceptions where certain tanks require more hp with less def and vice versa. Another viable strategy is using petrify gears which have a chance to inflict the petrification de-buff on enemies. (I find this to be most useful on tanks specifically built for PvP and Tower Invasion.) Tip #3 Resource and time management tricks regarding karats, valor, and pvp tokens: Some of the events require certain actions to meet the reward requirements. If you happen to log in late but still want to finish your daily event quests, consider these time saving methods: PvP tokens can be used quickly through the invasion towers on the world map. However, try to avoid using this daily since you may run out of towers. Need to use up karats quickly? Spend them on: valor; refreshing the black market; buying extra guild passes; or making summons. Need to use valor or finish battles quickly? Put low level and ungeared units into battle and let them get creamed. Note: for most people, this strategy is a waste of resources. However, if you’re in a pinch and need to complete certain quests quickly, this method may help. Tip #4 Save up and do the dailies to get free goodies. It may seem tedious, but gathering and saving resources from the daily quests will net users a reliable and free source of goodies. When properly saved up, it allows users more freedom to buy large purchases of things they really to want or need. (Huh, just like real life.) I find it helpful to always keep a certain number of karats and valor on me at all times. If I happen to exceed this number, I either buy valor to farm or summon units to use as fodder. By keeping a constant balance of these resources, I have the freedom to farm or make large karat purchases frequently. Tip #5 Bastille and Heylel can be farmed monthly for nat 5* craft fodder. This may seem obvious to some players, but free nat 5*s are great. Two of my favorite farmable nat 5*s are blue Heylel and Bastille. Blue Heylel can be crafted by obtaining blue Griselda, green Laura, red Belladonas, and light Rhamaan. Note: these heroes must be 1st level awakened and upgraded to 5*s before being combined into blue Heylel. The second unit I like to farm is Bastille. Bastille is obtained by farming guild dungeon points. However, I highly recommend that players obtain and fully transcend both Blue Heylel and green Bastille before using them for fodder, because who doesn’t love a free lvl 70 character? Note: you can farm and transcend the other Bastilles as well, however I find green to be the most useful. The photos I attached are of: the nat 3*s I recommend new players build; where Bastille and blue Heylel can be obtained; the location of the Invasion Towers; and examples of tanks geared with my usual setup VS petrify runes. Note: the difference in stats between the two servants is mostly due to the dark Lenore not being transcended. If you have any questions, feel free to send me a whisper on HoL. :) Gamer tag: Caelan Server: US 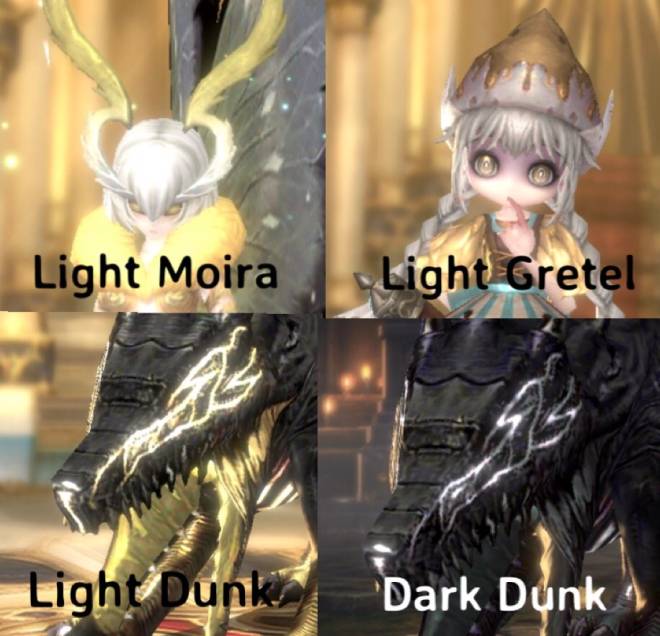 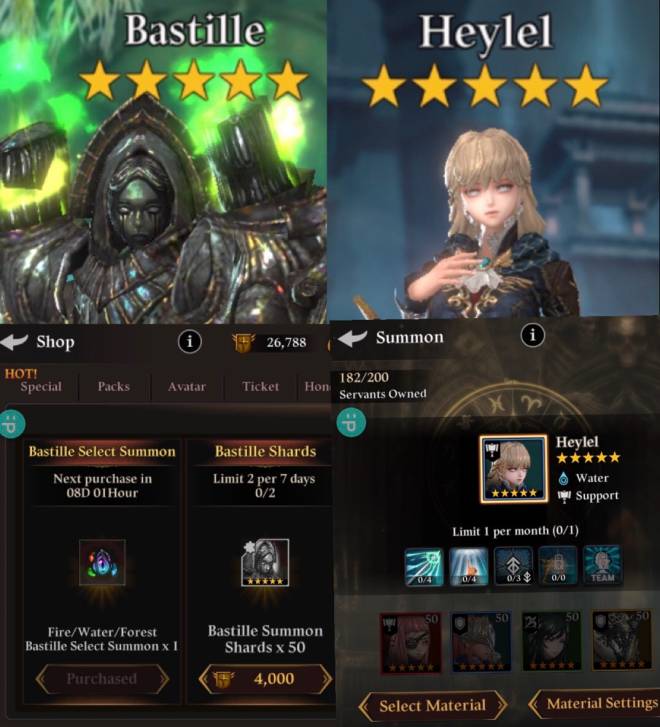 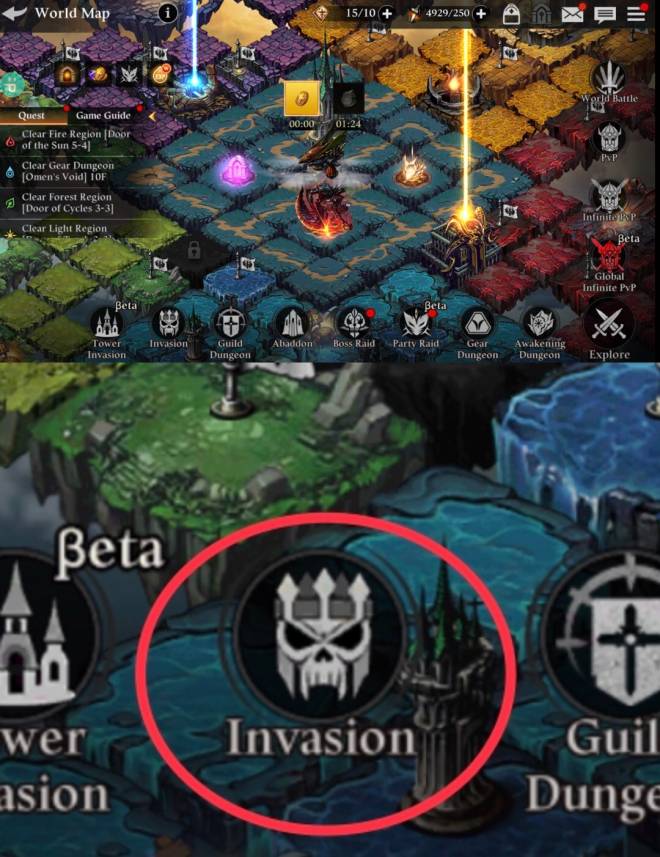 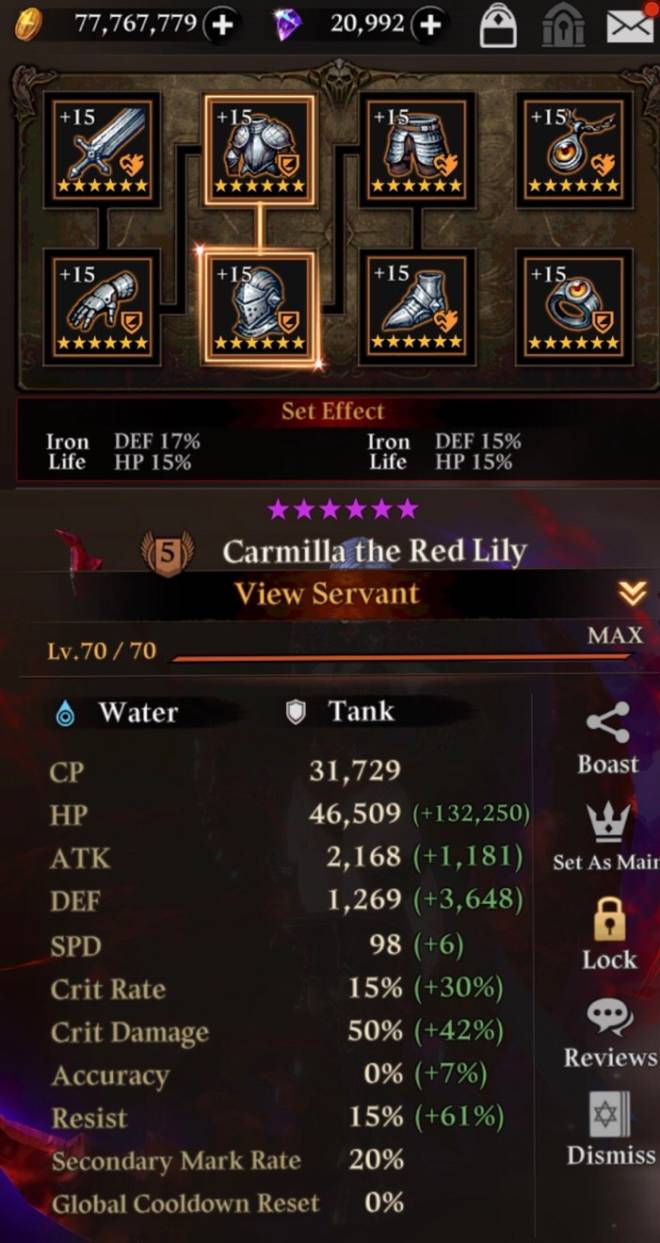