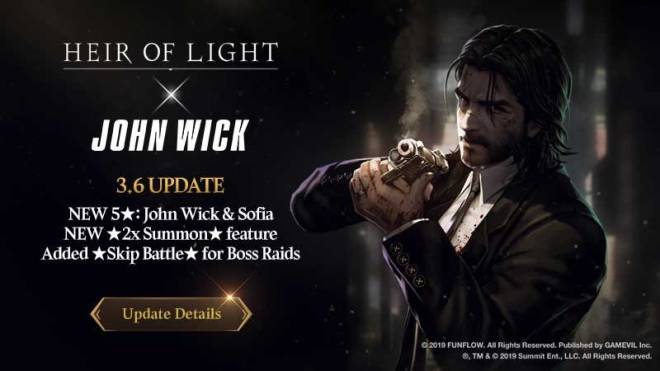 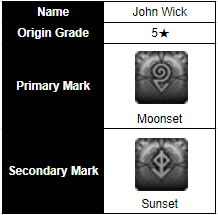 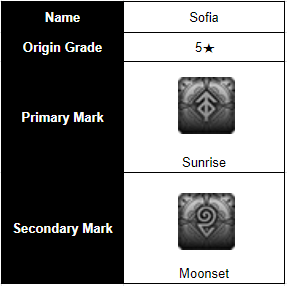 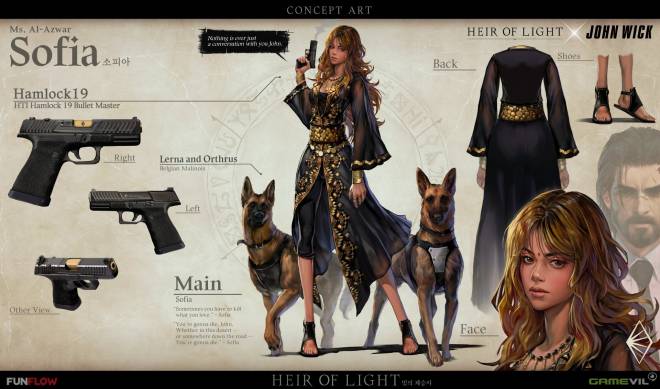 : Collaboration can only be obtained up to 3 months after the update.   [John Wick Icon Added to Lobby] : John Wick icon has been added to Lobby. : Tap on the icon to participate in the special event where you can obtain John Wick or Sofia as the ultimate reward.

3) Bosses' and Monuments' Skill Effect Improved : Some of the Skills and Passive Skill effects have been changed so that the World Bosses can grow stronger as the time passes. : Active skills of elemental Monuments have all been deleted, except for "Reduces all boss debuffs by 1 Lv.". : Changed Boss Skills are as follows. 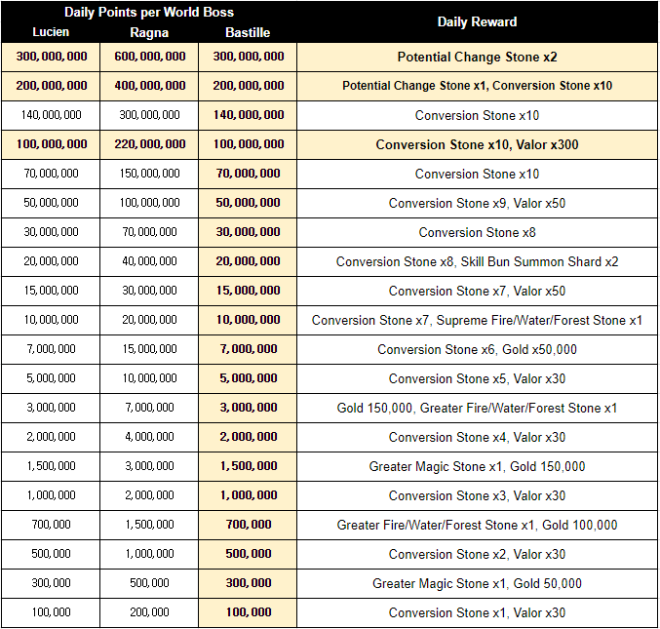 : In the Battle Prep screen, you can see your opponent's current saved team, and have a battle that follows the identical rules for Infinite PvP and Global Infinite PvP.

: Mock Battle results will not be reflected in points and ranks of Infinite / Global Infinite PvP.   [Relation Effect Improved]

: Even if you have developed Water Lenore before getting these Guide Quests, you must complete the missions again to clear the Guide Quests.   ◆ Servant Balance ◆ [Potential Balance Adjusted] 1) Damage calculating equation changed for [Reduce Damage] effect : The equation used to calculate the damage in regards to the [Reduce Damage] effect in Potential has been changed as follows. 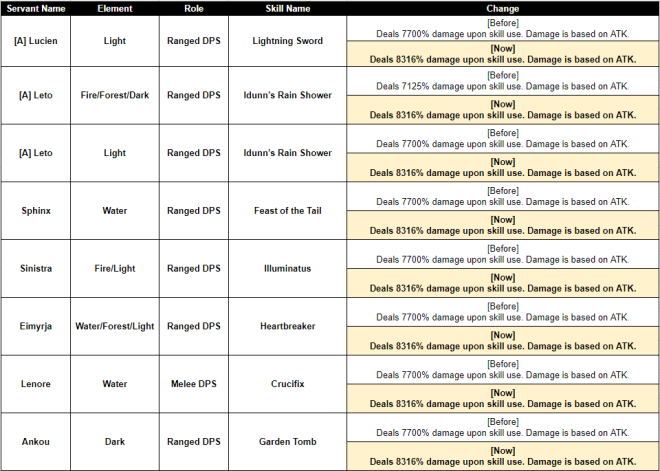 : This feature allows you to get double the Servants when you perform Summon. : You can use this feature in “Summon 10 time(s)” for Fire/Water/Forest ★3-5 Summon Stones and ★3-5 Special Summon, and “Summon 10+1 time(s)” in Rate+. : It’s available by enabling the 2x ON/2x OFF button on top of the Summon 10 time(s) or Summon 10+1 time(s) button. : When the 2x Summon option is enabled, it requires 1,000 Karats per each Summon attempt. You'll receive double the Servants from Summon.

: In Summon Results, a “x2” sign is displayed on all Servants, meaning that you have acquired double the Servants. : You'll also get double the fever gauge when 2x Summon is enabled.   [Improved Summon Rates for L/D ★3-5 Summon Stones] : You can now obtain 1 or more guaranteed 4★+ Servants when you perform Summon using L/D ★3-5 Summon Stones a certain number of times. : Please see the table below for more information:

[Collection Improvement - Added “Where to Obtain” Feature] : A new feature has been added to Collection that allows you to directly go to a stage to obtain a certain Servant Shard. : This can be found at: Collection > Select a Servant > [Where to Obtain]. This button is displayed only when there’s a stage where you can obtain a ★4-5 Servant Shard as a Clear Reward.

: A pop-up appears when you tap [Where to Obtain]. You'll see a list of stages and the Go Now button.

: You can go to a stage directly by tapping [Go Now]. A shard icon is displayed next to the available stage. : The shard icon disappears automatically when you leave that stage or tile. 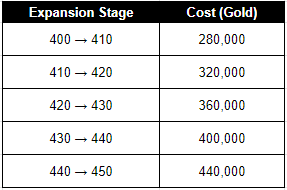 [Added Mark Save Feature for DEF Team] : You can now save Mark info of Servants in each mode when you set up your DEF Team in PvP modes, Party Raid, etc. : The Mark info of your PvP DEF Team will no longer be affected when you have saved Mark info for PvP and changed it in Explore mode. : This feature is available for PvP, Infinite PvP, Party Raid, Global Infinite PvP, Tower Invasion, and World Battle. : In order to use the Mark save function of the PvP DEF Team and the Party Raid Support Team, you must save the first time.   [Improved Daily/Weekly Missions] : Completion conditions of Complete All Daily Missions and Complete All Weekly Missions have been adjusted:

: Servant and Servant Shard info will now be displayed along with obtainable Gear info on the stage reward info tab.

: The [Excluding Max Level] checkbox has been added in the battle prep menu. : When you check this option, Max Level Servants are hidden from the Servant selection pane. : When you uncheck this option, Max Level Servants are displayed at the Servant selection pane. : Servants that have already been selected are not removed from the formation even if the [Excluding Max Level] option is checked.   [World Battle Improvements] 1) Changed Matchmaking Criteria : Matchmaking in World Battle will be based on last season’s Infinite PvP participation and ranks. : Please see the following table for more information:

2) Changed Reward Rank Criteria for Losses : Reward Rank for World Battle losses will now be determined based on the following:

3) Changed Rewards : Gold has been removed from the World Battle Reward List. : To accommodate this change, Ranks B - S and Ranks C - F will have 2% more chance to obtain Potential Change Stones and Karats + Valor respectively.   [New and Edited Messages for Servant Deployment Errors] : A pop-up has been added to address an error that occurs while using a Servant deployed in each mode. : You'll now be able to see the exact name of the mode the error occurred at and how to remove that Servant. : You'll be transferred to the title screen when you tap on the Confirm button. : We’ve also edited the pop-up that appears when you wish to dismiss deployed Servants or used them as upgrade materials more intuitively.

[Improved Buffs] ① Improved Buff Retain Condition : The condition for retaining buffs when receiving a new buff on top of existing one has been changed:

: You can now lock normal skills as well as Combo Skills. : Skill Lock feature works in 3 stages. : While everything is unlocked:

[Changed Team Passive Guide Text] : The descriptive text at the bottom of the Team Passive menu has been changed:

[Improved Servant Reviews] : Reviews will now have the date posted in Servant Reviews. : This enables you to see whether a review has been posted recently or not.   [Improved Chat Channel Change] : You can now enter a channel number directly on certain Android and iOS devices upon changing a chat channel. : Non-numerical characters and special characters cannot be entered.   [Improved Alert Feature for Party Raid Status] : Vibration and the waiting room flash effect will be disabled when you form a party using Support Team.   [Added Summon Animation] : An exclusive effect animation for Origin ★5 Servants has been added. : This animation is played only when you Summon an Origin ★5 Servant.

[Edited League Icon] : Tone of the League icon has been changed more vividly.   [Edited Avatar Appearance] : Swimsuit and hair color of [A] Sphinx’s Avatar have been changed in more natural way.   [Adjusted Infinite PvP Points Earned] : The amount of points earned from Infinite PvP has been slightly reduced, as the Infinite PvP points can now be obtained from Cult Training Ground.   [Fixed Mildred’s Combo Skill Time] : Fixed the time delayed when Mildred uses her Combo Skill. : The slowed speed will now be maintained until her 2nd strike.   [New Guide Messages for Invite Friend and Chat] : Guide messages have been added for Friend List, Requests Sent, and Requests in the Friend menu and when there’s no Mystery Dungeon list in the Chat tab.   [Edited Guide Message for Fusion] : The message displayed when there’s insufficient Elements for Fusion now clearly states “Awakening Material Dungeon.”   SHOP UPDATES [New Rate+ L/D ★3-5 Summon Pack] : A new Rate+ L/D ★3-5 Summon Pack has been added that allows you to summon a certain L/D Servant at a higher chance. : This pack is available for purchase 10 times every 7 days. (Go to Shop > Packs) : The Rate+ Servants included in L/D ★3-5 Summon Stones may be subject to change. This will be announced at the time of update.

[Update (Higher chance to summon certain character) on L/D ★3-5 Summon Stone] : The Rate+ available from L/D ★3-5 Summon Stones have been changed to L/D Mildred, John Wick, and Sofia.   [New Select Packs and Changed Purchase Limit] : New Packs for 5★ John Wick and Sofia have been added. : They can be purchased 3 times during the purchase period. (Go to Quick menu > Packs) : The available number of purchases will be shown as the following: ▶ Items

[Improved Pack Items] : Items in Gear Pack have been improved.

[Guild Shop Update] : Crafting materials have been added in the Guild Shop.