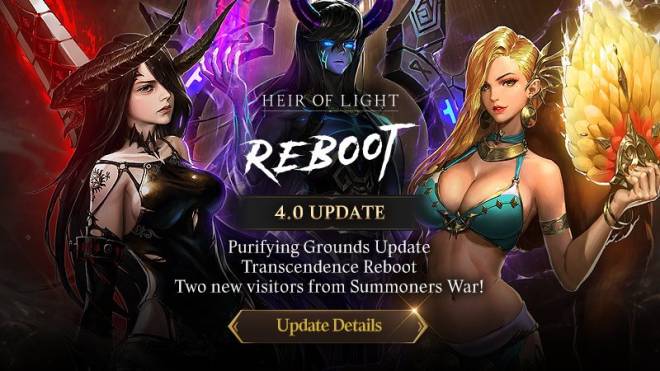 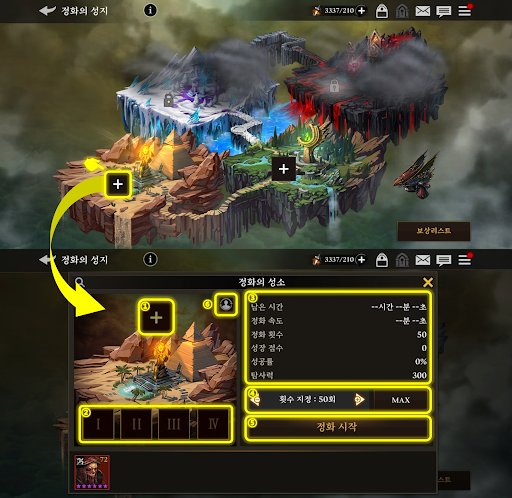 > Purifying Sanctum is open to all Heirs. > Other areas will be opened upon purchase of the Purifying Grounds Expansion or All-in-One Packs.

Deploy 4 Servants to carry out the Purification.

> Read over the instructions and tap [Yes]. > When you stop Purification, you will only receive  50% of the remaining Valor.   ■ Rewards 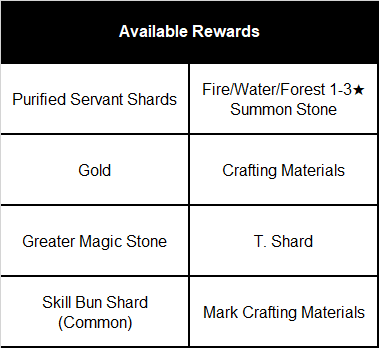 > You can obtain T. Shards of the same element as the Servant you Purify. > You can obtain Crafting Materials based on the element of the Servant you Purify. The Crafting Material you obtain will either be Fire/Water/Forest or Light/Dark. - Ex. When you Purify Fire Ankou ▶ you will randomly obtain 1 Ember or Ice Crystal or Kindling. > The Double Shard effect of Double Summon Shard Pack and All-in-One Pack is applied to the Purifying Grounds. (Excludes T. Shards and Skill Bun Shards)   [Summoners War Collaboration, 2 NEW 5★ Servants Added] > 5★ Ifrit and Oracle have been added as Summoners War collaboration Servants.   ■ 5★ Ifrit 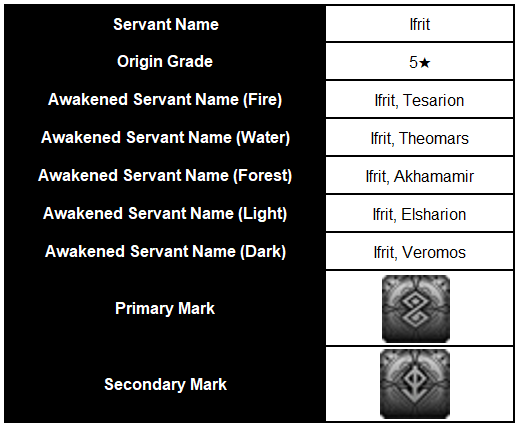 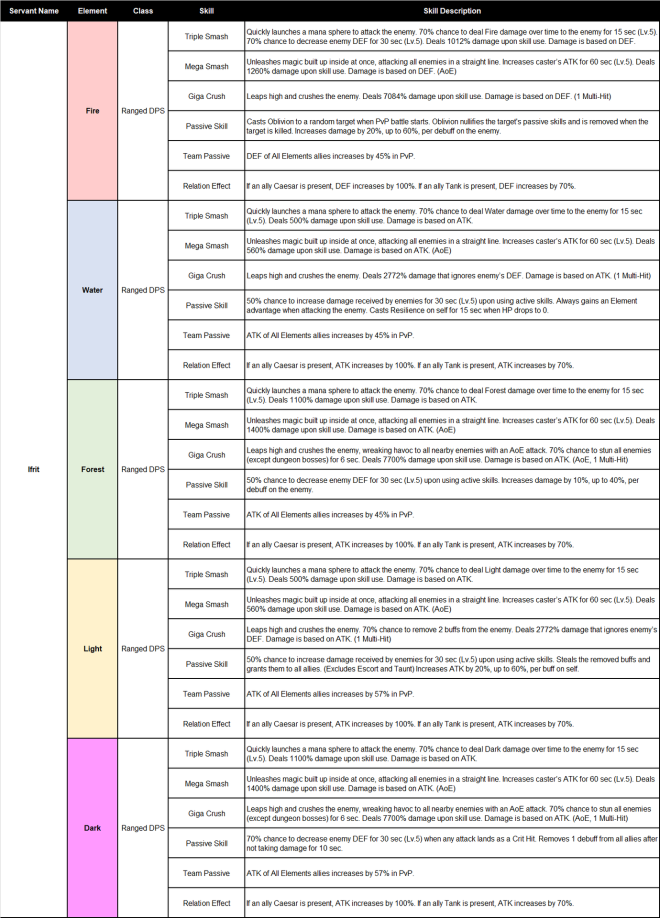 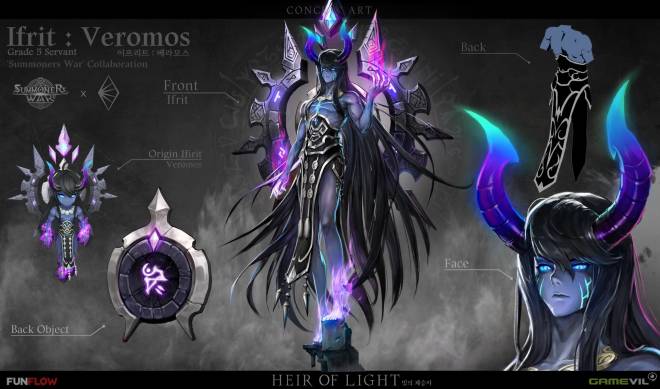 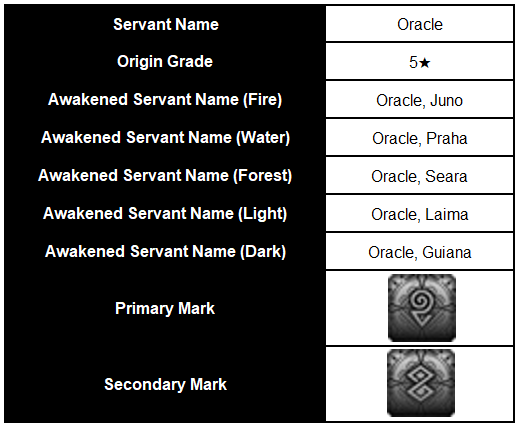 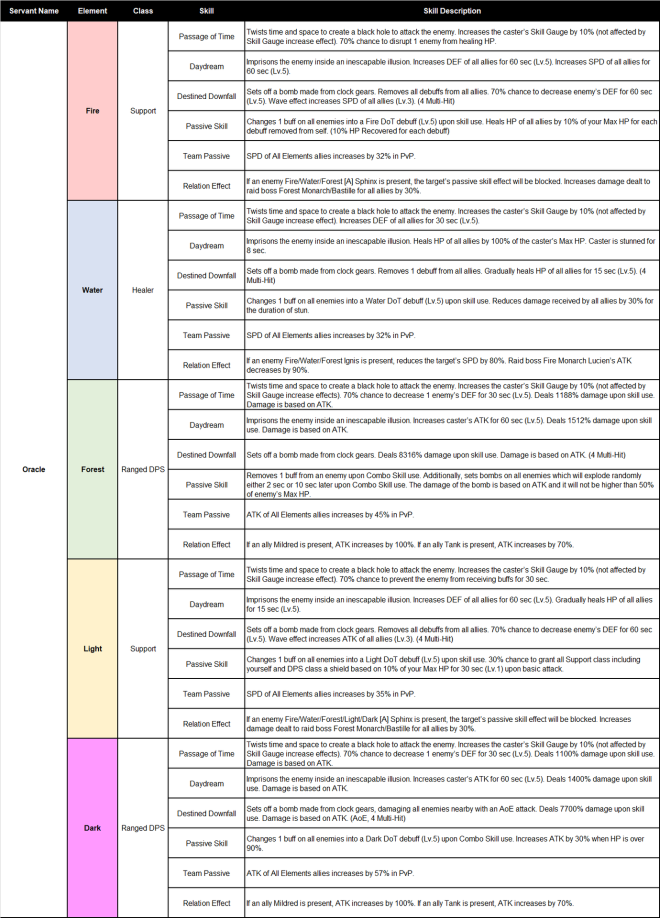 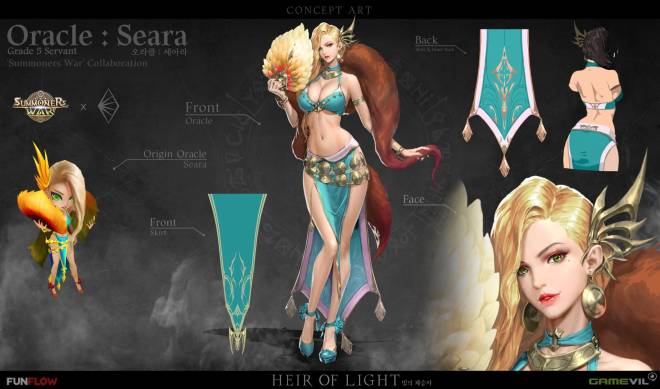 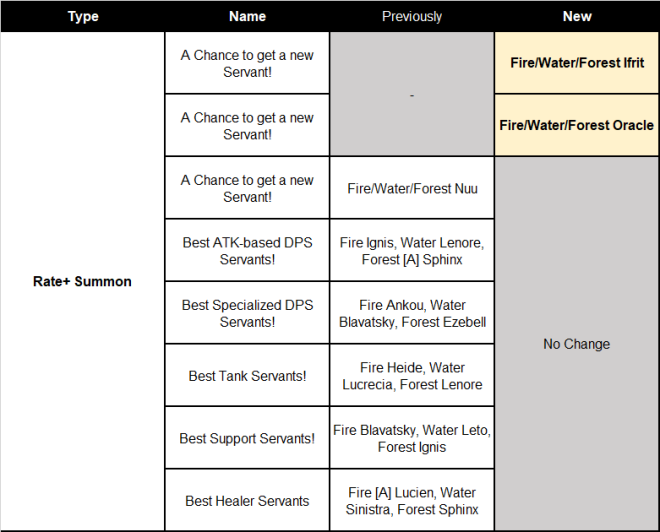 > Collaboration Servants are only available for 3 months after the update.   [Summoners War Collaboration Celebration, Special Combine Servant Added] > To celebrate the Summoners War Collaboration, Dark Ifrit has been added to the Combine List. > Dark Ifrit will be available for Combine from 2/26 CDT Update until 5/24 23:59 (Server Time). > Dark Ifrit can only be combined once during the combine period. > 4★ Servants can be combined 3 times during the combine period. > Combine limit and durations are listed below 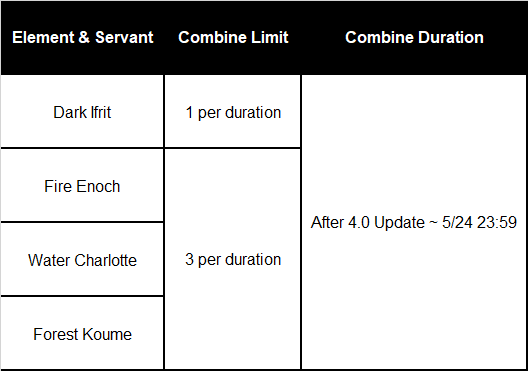 ■ Transcendence Expansion > The Transcendence Level for NAT 4★ & 5★ servants is increased from Level 5 to Level 10. > The max level cap has been increased to Level 80 due to the expansion of Transcendence. The number of experiences required to level up per level are listed below. 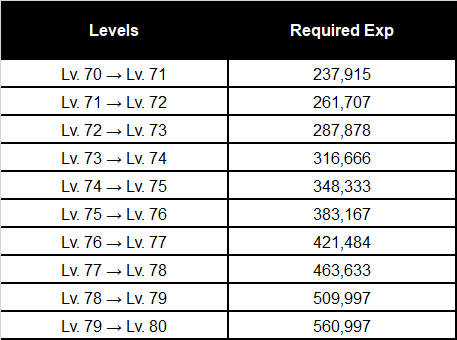 ■ Additional Stat boost from Transcendence Expansion > Additional stat boosts will vary based on the servant's grade and servant type (farmable / non-farmable) and details are listed below.   1. Base (ATK/DEF/HP) Stat increase per Transcendence 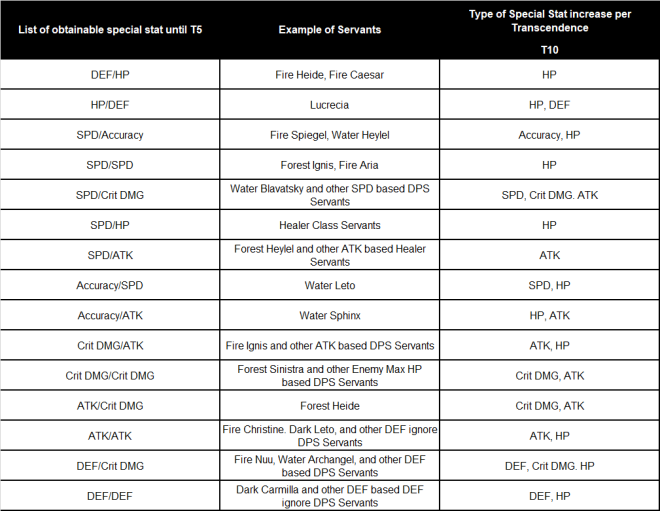 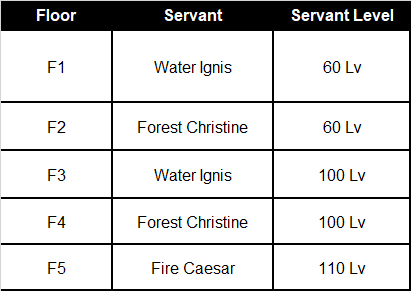 > The "Normal/Hard" mode will continue to use the "Clear Time' system.   ③ Monument skill text description revised. > The skill description of a skill that's used by the Abaddon Tower's Monument, the curse monument, has been revised to provide more details.   ◆Servant Balance◆ [Potential Skill Description for Forest Valkyrja Revised]

> Several Skills and Passive Skill Effects have been changed.   [Lucrecia's Transcendence Stat Improvement] > Lucrecia's base stat per Transcendence has been improved for all elements.

> The Collection Effect max Level has been increased to Level 15 for NAT 4★ & 5★ Servants   [Inventory Expansion feature during summon added] > You can now expand your servant inventory during the 10 Summon / 10+1 Summon when exceeding your servant inventory count.   [Guild Dungeon/Notice Text Improvement] > The guide notice pop up for Guild Dungeons on Sunday has been changed. > The same guide notice will pop up when attempting to view ranks on Sundays by clicking [Hall of Fame → Guild Dungeon]   [Servant Icon Highlight in the Awakening Tab Revised] > The icon highlight has been changed to only highlight the next awakening stage in the Awakening Tab.   [Buff Duration Display Improvement]

> "Recharge 2500 Valor" has been added in the shop   [New Servant Select Pack] > New packs for ★5 Ifrit and Oracle are now available. > They can be purchased 3 times during the designated sale period. ▶ Items

[T.Shard in Shop] * The T. Shard is now available at Shop → Honor/Guild/Party tabs. * Price and purchase limit is listed below.

* The number of Shards and Summon Stones has increased. Other items are unaffected.   ■ Special Summon/Twilight Legendary/Perfect Pack (Lobby → Packs)