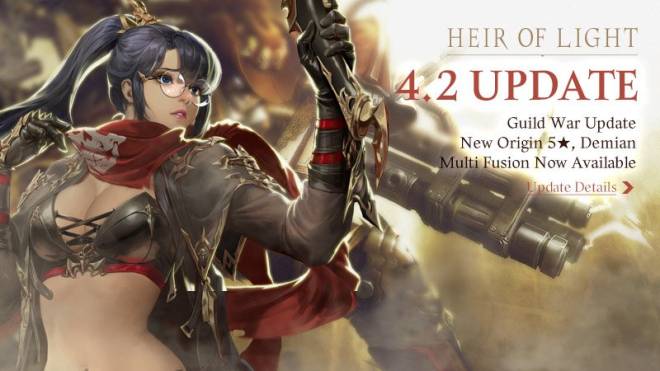 : Guild Officers must check special effect per battlefield to place the most effective DEF team.

Tip 1: It's important to understand each battlefield to come up with most effective DEF Teams. Tip 2: You cannot deploy a DEF Team without Servants or a DEF Team of a member who joins the Guild on the same day as the current Guild War. Tip 3: Guild officers should encourage members to manage their DEF Teams effectively and deploy them strategically.   Step 3: Matchmaking : Once Guild War requirements are met, matchmaking will automatically begin between 11:00 AM and 12:00 PM. : You will be matched against a Guild with a similar Guild War rank.

※ Since there are no Guild War ranks initially available, matchmaking will be held after distributing points to all guilds based on their previous week's Guild Dungeon ranks (THU - SAT). ※ A Guild that is not matched with an opponent due to an odd number of participating Guilds will win by default. Tip: You can view records of your guild members' battle results and Badges earned in Guild Log.   Step 4: Start of Guild War : Once matchmaking is complete, Guild War will begin at 12:00 PM. 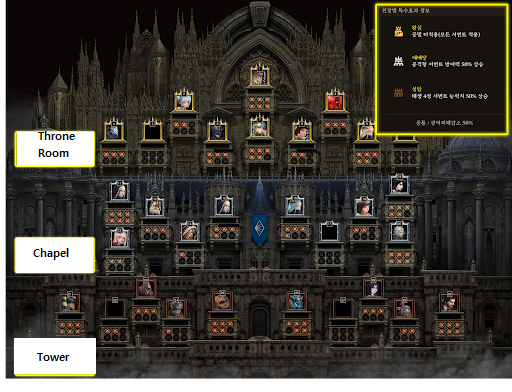 Step 2: Selecting and Attacking an Opponent : Each member gets 3 chances to attack. Losses will also consume an attempt.

Tip 1: Opposing guilds receive the same battlefield special effects. Be sure to check their deployment in each battlefield. Tip 2:When all guild members take part, everyone can participate in the attack and earn Badges even if they lose. Tip 3: Be sure to check the current battlefield, available Badges based on Stars Earned, special effects, etc. in the Battle Prep menu.   : Like Guild Dungeon, you cannot battle an opponent who is already fighting against someone in your guild. : If the game is left idle for more than 9 minutes during battle, it will count as a defeat regardless of the outcome.   Step 3: Badges Acquisition According to Result : You can earn Guild Badges based on your attack results.

: The number of stars is determined based on the number of Servants fallen in battle. Revived Servants will still count as fallen. 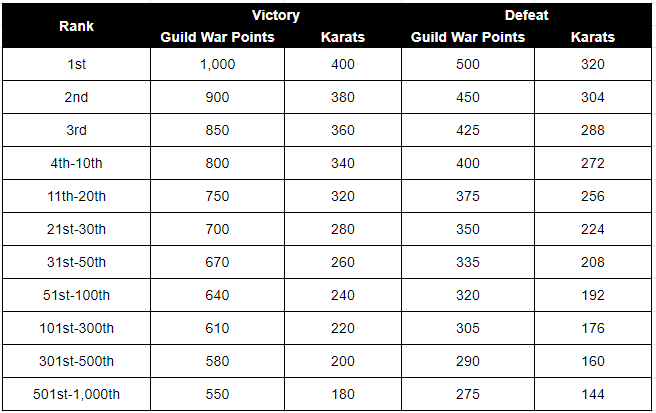 ② Rewards based on individual contributions 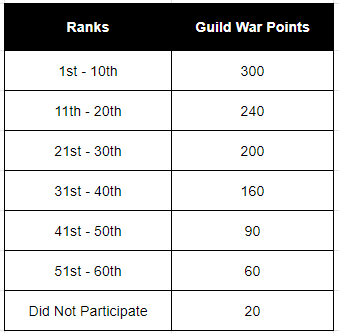 : Guild Sanctuary is available based on the following:

■ Misc. : Servants deployed in DEF Team cannot be dismissed or used as material. : Leaving or disbanding a guild or kicking out members are not available while Guild Wars are underway.   [New Servant: Demian] : A new 5★ Servant Devil Huntress, Demian has been added. 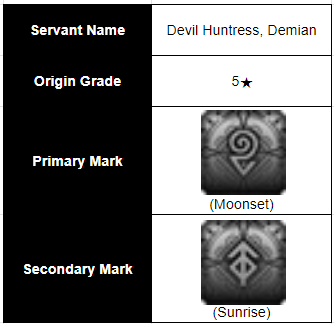 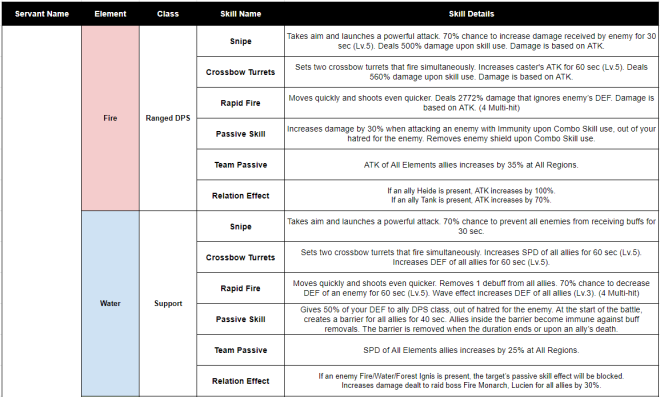 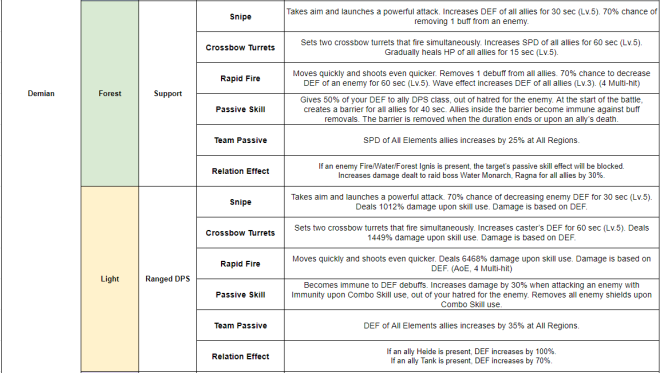 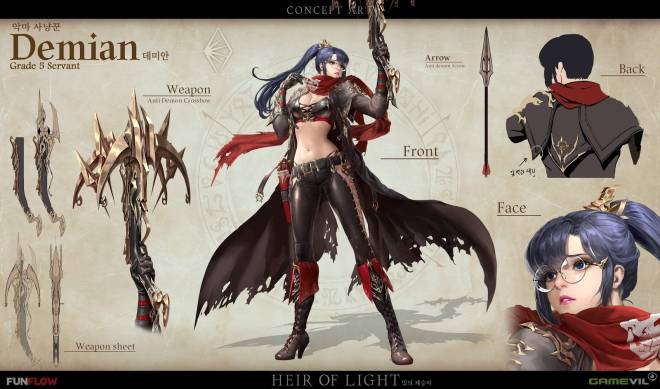 [Demian Avatar] : 5★ Liberated Huntress, Demian Avatar has been added. : You can purchase this Demian Avatar at USD 9.99 during this promotion period. (Price includes VAT, based on Google prices) 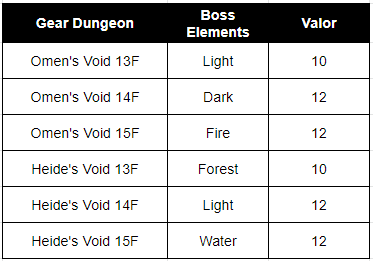 : The rate of obtaining high grade Gear is increased for higher floors of Gear Dungeons. 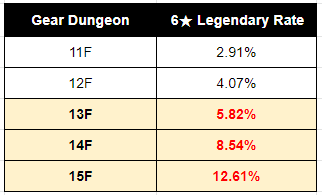 : 13F~15F Omen/Heide bosses have [Special] skills as they drop high grade Gear. * Omen uses “Faltering Calamity” and Heide uses “Perish” as their Special Skills. These skills cannot be evaded with ally skills.     ② Adjustments for Gear Dungeon 11F and 12F : Now you can get all parts of Gear from 11F. Previously you could only get Necklaces and Rings. : The rates for 6★ Epic and Legendary Gear has been slightly increased. : The rates for 3~5★ Summon Stone and Special Summon Shards has been adjusted for 12F.   ◆ Servant Balance ◆ : There were balance adjustments for some Servants as follows.   [Buff Removal Changes] : The number of buffs you can remove has been changed for some skills.

: Water John Wick / Fire Ankou, who have the same skills as Passive Skills, will not be included in the addition and adjustment of this effect.   [Increased Dark Valkyrja Servant Skill Damage] : The skill damages of AoE DEF-based Servant, Dark Valkyrja, has been changed as follows.

◆ Improvements ◆ [Default Repeat Battle Tries Increased] : The default number of Repeat Battles have been increased to 150 times. : The previous method of increasing Repeat Battle tries based on your level has been eliminated as well. You will now have 150 Repeat Battles available no matter what level you are.

* Pack (Repeat Battle Pack Ⅱ or All-in-One Pack)     [Improved Combine Feature] : Combine has been improved to eliminate the inconvenience of Combining one Servant at a time. : Now you can Combine up to 10 Servants at the same time. : The probability for 5★ Origin Servant will now be displayed as Guaranteed / Available / Not Available. (The rates remain the same.) : “Origin ★” has been added to clearly display how the probability changes based on Origin grade. : Other than the feature to combine multiple Servants at once, everything else remains unchanged.

[T. Shard Exchange] : You are now able to convert Origin 3★ Servants into T. Shards of their respective Elements when you summon them. : You can turn this feature on by toggling the "3★ T. Shard Exchange" option in Summon. (Available at Crusade Lv. 36) : If x2 Summon is enabled, T. Shards will also be doubled. : T. Shards will be directly added to your T. Shard balance instead of being sent to the Mailbox. : The number of T. Shards received from converting Origin 3★ Servants is as follows:

: The Servants and the required Valor for each floor after the 4.2 Update is as follows. 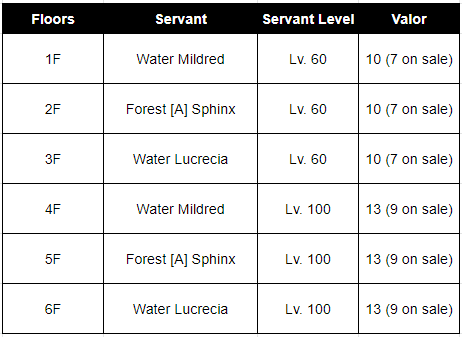 : The EXP, Gold and random rewards for Mass Invasion remains unchanged. : Mass Invasion is open from 2020/4/21 (Tue) after maintenance until 2020/5/24 11:59 PM.     [Improved Abaddon Difficulty] : “Curse of Monument” has been nerfed for Abaddon monuments to make Abaddon easier. : The aggro stats that are reduced by “Curse of the Monument” have been slightly decreased. The duration has also been improved from [Previous] 20 sec → [New] 10 sec. (When a Tank Servant uses Taunt, the aggro will be focused on the Tank Servant and the duration will also be reduced. This will make Abaddon easier to play.)     [Improved Guild Contents] : Guild Check In Rewards have been improved and some Guild content have been removed for Guild War Update.   ① Improved Guild Check In Rewards : Daily Check-In Reward and Consecutive Check-In Reward have been improved as follows. 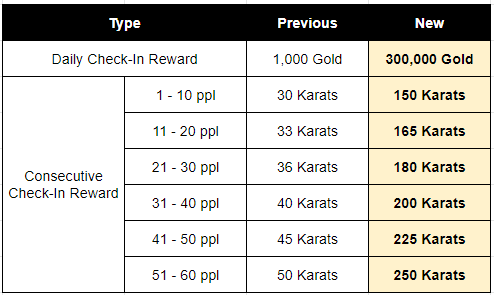 [Changed League Group Standards] : As the average of Growth Scores have gone up after the Transcendences were increased, the standards for League Groups have been changed as follows.

: The changed Group standards will be applied after the calculation, after the update.     [Summon Effect for 4★ Removed] : When 4★ Servant is summoned from any summon, the summoning effect (lightning) will not be shown after the update.   [Optimization for Screen Ratio 22:9 Resolution] : Additional resolution optimization work has been done for 22:9 screens (Z flip device).   ◆ Shop Updates ◆   [New Guild War Pack] : Guild War Pack has been added to celebrate the opening of Guild War feature. 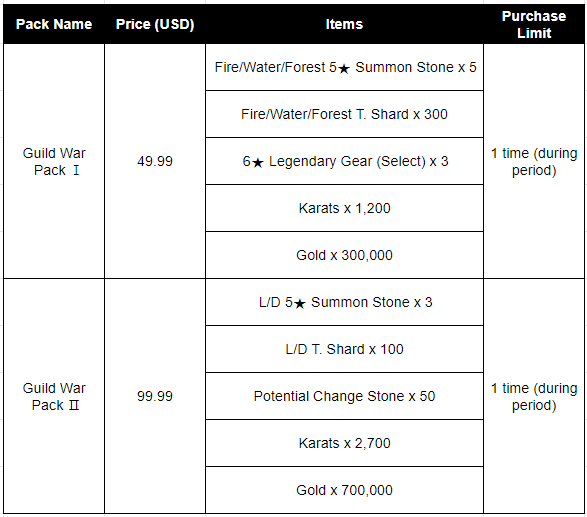 * The changed mentioned above will be the only changes to this pack.   ③ All-in-One Pack (30 days)