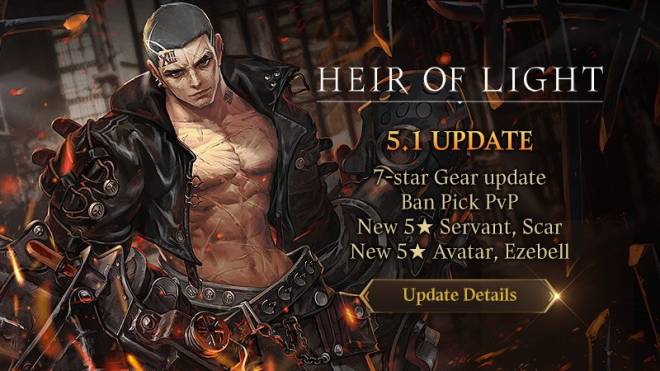 Greetings Heirs,   We are here with the 5.1 Update Patch Note. Please check out the details below.   ◆ Update ◆ [New Servant: Scar] 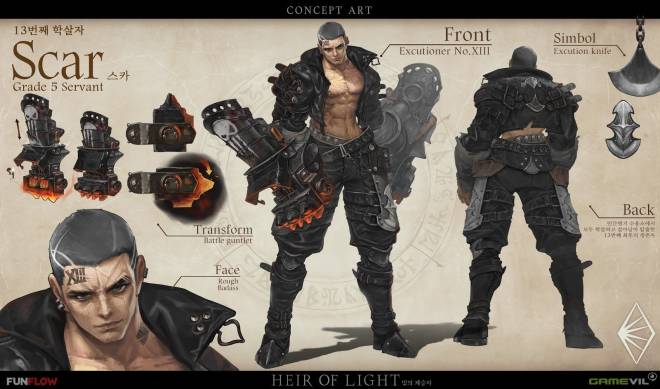 : The ATK/DEF/HP stats for Transcended ★5 Scar are as follows.

: Collection Effect has been added for the new Servant.   [Ezebell Avatar Added] : Shadow of Dawn, Ezebell Avatar have been added. : You can purchase the new Ezebell Avatar at USD 9.99 during this promotion period. (Price includes VAT, based on Google prices) : When you enter, tutorial will automatically start.   ■ Basics of Ban Pick PvP : This battle mode observes the same rules as Infinite PvP, but includes a ban phase where two Servants are banned before the match. : Unlocked at Crusade Lv.38. PvP Tokens required for entry. : Each player selects 1 Servant to ban. : Banned Servants cannot be used by either one of the players.   ** Infinite PvP vs. Ban Pick PvP > What’s the same?—Entry fee, currency earned, Team Passives, Repeat Battle, group/matchmaking standards. Season and rank standards are also identical. > What’s different?—No Mock Battle or Cult Training Ground. Defense Team is saved at the start of the battle. Content unlocks at different Crusade levels.     ■ Battle Preparation and Team Setting 1) Battle Preparation : Ban Pick PvP is a 4-on-4 battle. : Battles are played in AUTO mode. There will also be a system that limits the activation of Passive skills in certain situations called Overwhelm.   * What is Overwhelm? When there are two identical Servants of the same element on either side, the Passive skills of the Servant with the lower Transcendence will not activate.   2) Team Setting : A total of 8 Servants will fight in Ban Pick PvP, and 1 Servant will be banned.

① Bans: You may ban any single Origin 5★ Servant, including ones you don't have. ② Main Team: Consists of 4 Servants that will take part in the battle unless banned. Their Team Passive will be available. ③ Sub Team: When a Main Team Servant is banned, 1 of these 4 Servants will sub in.   : If none of your Main Team Servants are banned, all 4 Servants will participate in the battle. : If one of the Servants on your Main Team is banned, the Servant in the equivalent Sub Team slot will sub in. Ex. If Water Lucrecia in Slot #4 of your Main Team was banned > Fire [A] Lucien in Slot #4 of your Sub Team will participate instead. (If your banned Servant was using Team Passive, your battle will be fought without your selected Team Passive.)   : The following Servants cannot be included in your Main or Sub Team.

■ Battles and Rewards : Tap [Battle] to begin when ready. : Servants must be deployed to Slot #1 of both your Main and Sub Team in order to begin the battle. : If bans prevent the Defense (your opponent) from deploying their Main Team, then you will win by default. : You will earn Honor Points regardless of whether you win or not. Consecutive wins will grant you a Winning Streak Bonus.   ■ Season/Group/Rank Rewards : Each season lasts for 1 week. Once the season ends, you will receive a reward based on your final rank within your group.

: Season schedule and calculation periods for Ban Pick PvP are as follows:

: After the season’s results are tallied, enter Ban Pick PvP to have your rewards sent straight to your Mailbox. Rewards are available to claim for 7 days. : When you enter Ban Pick PvP at the start of a new season, an alert regarding the new season will be displayed alongside a rundown of your new group. : Your rank and group panes will differ based on your League.

: Diamond group will receive their Season Rewards based on their group rank.   [7★ Gear Added] : Gear star grade has been extended to 7★ to help you grow stronger. : 7★ Gear will have the same main stat, adjective, and sub stat. : The rules for enhancing, converting and Super-Enhancing remains the same.   ▶ Where to Obtain 7★ Gear : Obtain 7★ Gear from Gear Dungeon 16F - 20F. : Obtain 7★ Gear by crafting Epic/Legendary 7★ Gear at Craft Gear. (Available at Lv. 50) ※ You cannot purchase 7★ Gear from Black Market.   ▶ Main stat, adjective, sub option, and values for sub option upon Transcendence for 7★ Gear 1) Main Stat 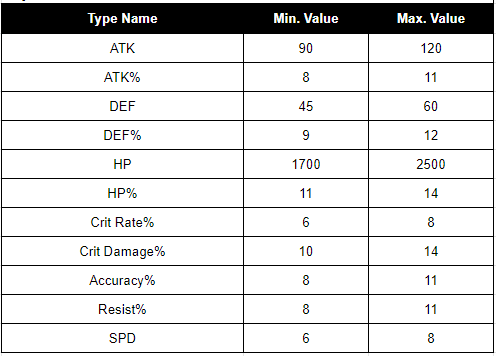 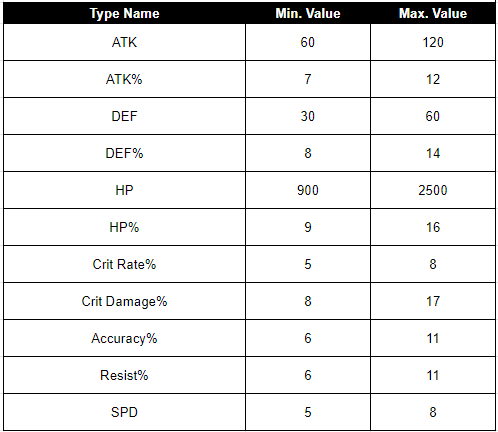 4) Min. Value / Max. Value for Sub Option upon Transcendence and the number of Transcending Aura spent 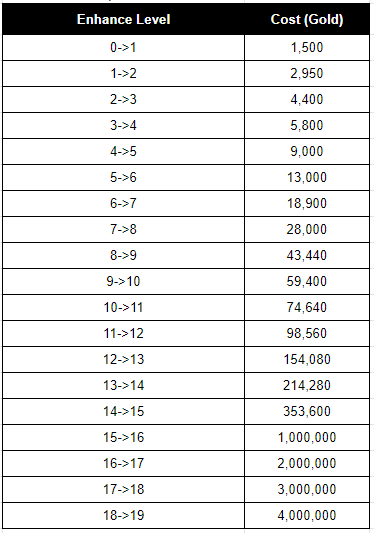 ※ The Monument’s element is identical to the boss.   : Boss skills are identical for 16F-20F. Only the element of the damage over time will be changed.

: The higher you go, the more gear material you will be able to obtain.   ▶Heide's Void : Boss Elements per Floor

※ The Monument’s element is identical to the boss.   : Boss skills are identical for 16F-20F.

: The higher you go, the more gear material you will be able to obtain.     ◆ Servant Balance ◆ [Skill Gauge during Freeze Changed] : From now on, Skill Gauge will fill up even when your Servants are frozen. : This applies to Freeze used by Servants and also Monuments.   [DEF Up and DEF Up Wave Value Adjusted] : Values for DEF Up Effect and DEF Up Wave have been adjusted as follows.

[Servant Stats Adjusted] : ATK has been reduced and DEF and HP have been increased for some of the Support Servants.

: ATK has been reduced and DEF increased by about 44% for Fire/Water/Forest DEF-based DPS Servants.

: ATK and HP have been reduced and DEF increased by about 48% for Light/Dark DEF-based DPS Servants.

[Silence Duration Adjusted] : The duration of Silence has been adjusted for all enemies as follows.

[Max. Value for Accuracy and Resist Adjusted] : Max. Value will be increased to 250% for Accuracy, and to 300% for Resist.   [Potential Stats Adjusted] : The stats for Normal Potential #3, 4, 5 which is “Reduces DEF Ignore Damage received upon being hit by a DPS” has been adjusted as follows.

: Required Energy and Repeat Rewards per floor is as follows. 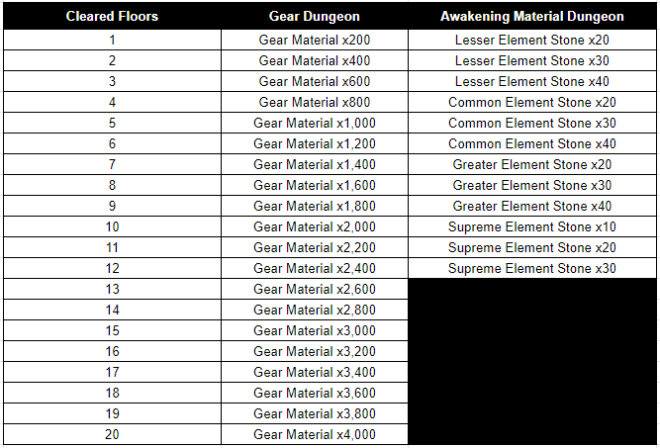 [Mystery Dungeon] : Boss level will be adjusted from Lv. 100 → Lv. 90 after the 5.1 update. : Boss level will be adjusted because there were players experiencing difficulties after the level increase with 5.0 update.       [Gear Star Grade Bulk Sell Feature Added] : A new feature that lets you select the star grade of the Gears you want to sell has been added to Bulk Sell. : Go to Gear > Gear Settings to use this Bulk Sell feature. : When you use this feature to select a star grade, Gear that’s equipped (includes Gears using Try On) will not be selected.

[Difficulty for Big Tiles in Explore Adjusted] : Boss level difficulty has been increased for some of the big tiles in Explore.   [Quest Order Adjusted] : The order in which the elemental quests are opened have been adjusted as follows.

▶ Pop-ups and Alerts added for Guild Donation Rewards : A red dot will show up on Guild icon and Guild > Guild Progress, when you enter for the first time every day. : When you donate to your Guild, you will now see a pop-up message about the Donation Rewards you obtained.   ▶ Guild Levels Adjusted due to lowered amount of level up EXP : As the required amount of level up EXP has been reduced, the current Guild levels will be adjusted to reflect this change. Ex/ Your current Guild Level is Lv. 3 and your Guild EXP is 190,000. With this update, your total Guild EXP becomes 500,000, and this means your Guild Level becomes Lv. 4 and your remaining Guild EXP becomes 50,000.   ▶ Guild Benefits for increased Guild Levels : Guild Benefits (discount on Karats) will be increased from (Prev) Max 60% → (New) Max 99%. : Karat discounts based on Guild levels are as follows.

[Alert Added for Boss Invasion Servant Bond] : The following text will show when you try to activate Bond with a Servant who has been deployed to Boss Invasion party.

[Repeat Rewards Adjusted for Sanctuary Areas] : The number of Repeats required for T. EXP-changed Origin 5★ Servant Shard has been changed as follows. It only affects the areas where the previous Servant of Ezebell is the boss, out of all Fire/Water/Forest/Light/Dark Origin 5★ Servants.

[Limited Packs Repurchase Date Changed] : Repurchase for Limited Packs (Daily Karat Pack, Double Shard Pack, All-in-One Pack) will now be available in (Prev) 0 days → (New) 1 day.   ◆ Other Announcements ◆ [Tower of God Collaboration Ended] : Tower of God Collaboration ended, which means Bam, Yuri and White will not be available for 5★ Select Summon. : Tower of God Collab Transcendence Bun (Bam, Yuri, White) has been added to 5★ Servant Select Summon, to help with transcending 5★ Bam, Yuri and White.   [Guild Battle Points Reset and Restart] : Guild Points for each Guild will be reset. Points have been restarted based on the Guild Battles that were carried out right before the update.   [Ban Pick PvP Drop Added to Halloween Drop Event] : Ban Pick PvP will be added to the Halloween Drop Event. : Please refer to the event notice for details.   [Using Crusade Name from Deleted Account] : You can now use the Crusade name that belonged the accounts that were deleted before the update, and have been deleted for 3 months. You can only use the deleted name once.   ◆ Bug Fixes ◆ : When you save Teams, Origin 1★ and 2★ Servants will not show up on the Servant list. : Fixed the bug where the Fuse result window did not show up after showing the special effects for getting Origin 5★ one time. : Fixed the bug where the owned number of Valor was not immediately refreshed when you obtained Valor from your Mailbox to use Valor as material in Craft. : Fixed the bug where the Mark of secondary Servant, which was equipped after Bond was established, disappeared in certain situations when you cancelled the Bond. : Fixed the bug where Instant Pack was displayed in Results window and not the menu window after obtaining 4-5★. : Fixed the bug where the boss became Stunned, not Groggy, when hit with Ezebell’s Combo Skill, Solitaire. : Fixed the bug where Drop Event pop-up briefly showed when you tap on Event menu. : Now the Replace slots will not show at the end of Skip screen when Auto Replace is selected in Skip. : Fixed the bug where rewards pop-up did not show when #10 quest for Fuse Guide is completed. : Fixed the bug where Karats were shown even though Karats were not returned, when defeated guild were stopped from using Guild Sanctuary.   Thank you.   Flynn