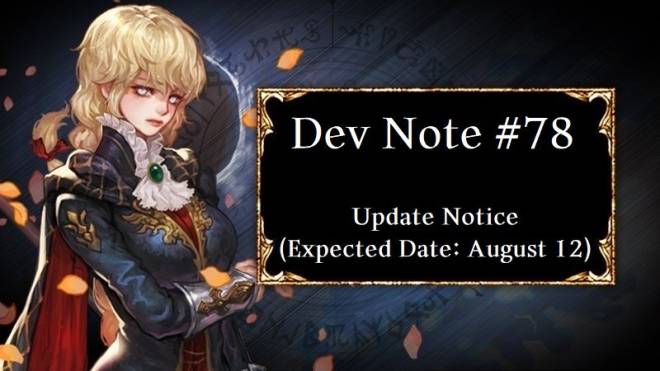 Greeting Heirs,   Today, we want to go over details of Update scheduled to arrive next week.   ♦New Combine♦   As we mentioned earlier, new servant on Combine list will be [Water] [A] Sphinx. [Water][A] Sphinx is available for Combine until 9/16. [Water][A] Sphinx can be combined only once during the duration.   Following servants are required to combine [Water][A] Sphinx. > [Fire] Usher > [Water] Enoch > [Forest] Hern > [Light] Moira (Nat 4★ can be combined 3 times during the period)   Here are the list of combine materials for Nat 4★ servants: > [Fire] Usher: [Fire] Sirucus, [Fire] Marat, [Water] Moira, [Forest] Gwyllgi > [Water] Enoch: [Fire] Mordu, [Water] Gretel, [Water] Medjed, [Forest] Dorrit > [Forest] Hern: [Forest] Moira, [Forest] Otik, [Fire] Rhamaan, [Water] Nutkin   ♦Servant Update♦   In this update, we focused on making improvements of servants that were frequently brought up in community's feedback.   ●Servant Buff●   [Water] Ankou: Buff Removal will no longer remove DEF Increase Buff from his passive.   [Dark] Archangel: To prevent Passive from being removed by Buff Removal, we will be changing his [Decrease Damage Received] effect from his passive to [Increase DEF]. Therefore, the final passive will be "Becomes immune to DEF debuffs and increase DEF of all allies by 30%. Every time an ally servant dies, increase ally DEF by 20%, up to 90%.   [Light] Eimyrja: Her Passive skill will be improved. Before: Greatly increases aggro of Tank class. Heals HP of Tank class by 10% when an active skill lands as a Crit Hit. After: Greatly increases aggro of Tank class. Heals HP of Tank class by 15% when a skill lands as a Crit Hit. Also, her Multi-hit Combo Skill damage ratio will be changed from [1st hit: 30% 2nd hit: 70%] to [1st hit: 50% 2nd hit: 50%].   ●Transcendence Effect Change●   Upon Transcendence, [Fire]/[Dark] Eimyrja and [Dark][A] Lucien will receive [SPD] instead of [Accuracy] as Transcendence Effect.   We will also be improving stat by Transcendence for Archangel and Valkyrja. (Other servants that cannot be farmed will be buffed as we move on. We decided to buff Archangel & Valkyrja first since we are getting closer to the end of collaboration period.)   ●Saighead Skill Level Up Effect Change●   As we add [Increase Buff Level by 1] to Saighead's 5th Awakening Active Skill Level Up Effect, we will be adjusting some Skill Level Up Effect. The [Increase damage by 10%] on 3rd, 4th, and 5th Awakening Skill Level Up Effect will be combined to one [Increase damage by 30%] on 4th Awakening Skill Level Up Effect.   ●Nat 4★ Servant Relation Effect Added●   Relation Effect has been added for some Nat 4★ servants that did not have a Relation Effect yet.   [All Element] Laura / Torhino: Increase damage dealt to dungeon boss Omen for all allies by 40%. (We will be adding more Relation Effect for Nat 4★ servants without a Relation Effect in 3.6 Update.)   ♦Summon Rate Improvement♦   Starting this Update, we will be working on reducing difficulty of acquiring servants through Summon.   With this Update, we want to guarantee a lightning for every certain number of summons for Heirs that get extremely unlucky and encounter zero Nat ★5 servant or lightning even after numerous summoning.   The Update will be applied to ★3~5 Summon Stone, ★3~5 Special Summon, and Rate + Summon. From now on, Heirs are guaranteed to encounter a lightning (★4~5 Summon) before reaching certain number of summoning.   For example, you are guaranteed to see one lightning with 11 summons in Rate+ Summon. ( 10+1 Summon will include at least 1 ★4~5 servant)   As we work on this Update, we will also be increasing summon rate for ★4~5 servants.   We will update the community with detailed rates in future notice.   ♦Potential Enhance Stone Acquisition Increased♦   Potential Enhance Stone in Party Shop can now be purchased up to twice a week instead of once a week.   You can now purchase 1,000 Potential Enhance Stones from Mileage Shop for 150 Mileage twice a week.   Please feel free to ask any question on the comment.   Our main focus has always been to make a fun game through active communication with players. While we understand that some Heirs are not completely satisfied by the Update, we hope that Heirs would trust us and support our direction. We are very sad that recently many comments that we have been leaving on the community only caused severe criticisms. Even when it comes to this Dev Note, while we used to write Dev Note in more casual fashion, we went through multiple edition to make sure the Dev Note does not cause any misunderstanding.   We put in great amount of effort preparing this new Update. We hope that as many Heirs as possible could enjoy the new Update.   Abraham Lincoln once said “Everybody likes a compliment.” We hope that Heirs would be more understanding about parts they are dissatisfied about.   Thank you.