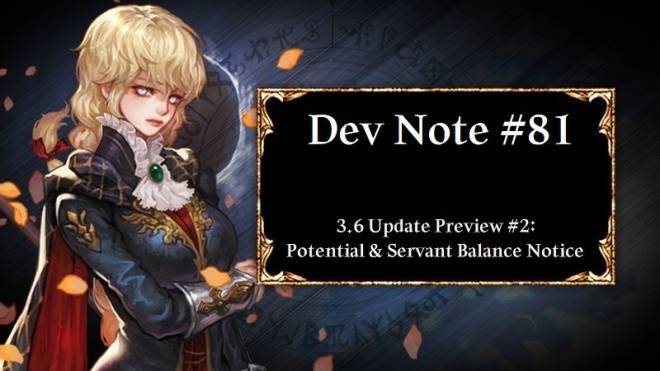 Greetings Heirs,   In today's Dev Note, we want to go over Potential & Servant Balance.     1. AoE Damage Reduction Potential Equation Change / Numerical Value Change     AoE Damage DPS servant started from [A] Sphinx, and currently there are several AoE Damage servants including the most recent Mildred. If we say that the main target of AoE servants' attack takes 1 damage, the rest of the servants take 0.3 damage. While numerically AoE servants are supposed to do less damage to other servants beside the main target, we see more and more battles where even the 0.3 damage kills enemy servants as we added more servants capable of doing even greater damage.   Currently, there are 6 Normal Potentials regarding damage reduction: 3 potentials that reduce damage received by Multi-Hit Combo Skill by 20%, and 3 potentials that reduce damage received by AoE damage by 10%. Since these values add up, servant will receive only 10% of the damage equipping all the Potentials above.   This means that a servant will still take 70% of the damage against Mildred that does a Single-Hit AoE attack or any other AoE servant who's Combo Skill is set to a Single-Hit even with the 3 Potentials that reduce damage received by AoE damage by 10%.   When we first implemented Potential system, we wanted to provide a mean for Heirs to improve on what their servants lack to defeat the opponent. Given such intention, we judged that current AoE Damage Reduction Potential is rather underwhelming.   In the 3.6 Update, we will be changing the equation for damage reduction due to Potential from Addition Equation to Multiplication Equation. Also, we will be improving the numerical value of AoE Damage Reduction from 10% to 20%.   To provide more details of the equation: Current Equation: Damage = ( 1 + Potential Damage Increase - Potential Combo Skill Multi Hit Damage Reduction - Potential AoE Damage Reduction)   After 3.6 Update: Damage = ( 1 + Potential Damage Increase - (1 - (1- Potential Multi Hit Damage Reduction)*( 1- Potential AoE Damage Reduction) ) )   To make the change more visual: 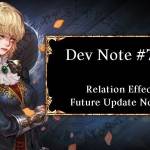