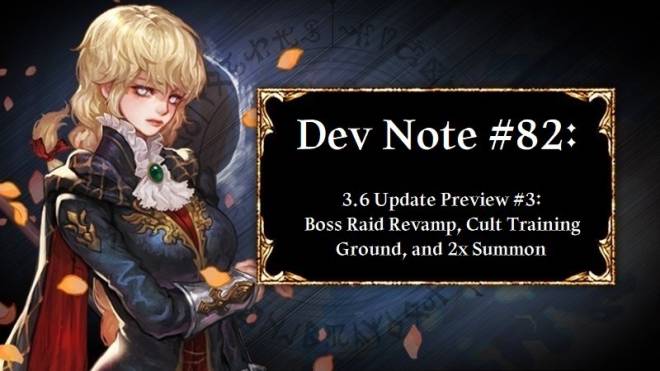 Greetings Heirs,   Let's start our Dev Note #82 covering Boss Raid Revamp, Cult Training Ground, and 2x Summon function.   Boss Raid Revamp   Based on the community's feedback asking for not only addition of new content but also improvement of old contents, we have been constantly improving old contents. It is true that Boss Raid lost big part its strategic gameplay after several balance adjustments and addition of multiple systems. Therefore, we decided to revamp Boss Raid to bring major changes that will make Boss Raid fun once again.   1. Skip Battle Added   We have already mentioned to Heirs that we do not have plan of adding "Quick Clear" function on top of Repeat Battle function that we already have. This is not only we because we value the effort to reduce clear time of Explore or Dungeon stages, but also because we believe that supporting auto gameplay further than repeat battle would decrease the fun of actually playing the game even more.   However, we do understand Heirs' feedback that it is becoming harder to clear through all the contents as the number of "daily tasks" increased.   Since Boss Raid does not give reward every round, Heirs currently do not have to grind Boss Raid for reward. Instead, Heirs have to grind the content for higher damage output since higher damage would lead to greater reward.   Currently, since the Boss Raid gives daily reward based on daily top score, Heirs need to reach certain amount of damage score every day. However, it is actually harder than it seems to reproduce the similar amount of damage score close to top score each and every day. Rather than forcing Heirs to attempt highest score everyday, we thought it would be better to for us to minimize the attempts per season so that Heirs can be proud about the top score reward for longer period of time.   Therefore, after reaching the top score of the week, Heirs can receive daily reward based on the top score of the week using Skip Battle function.

2. Boss Raid Weakness Added   Boss in Boss Raid changes every week, each with its own unique characteristics. In order to maximize the damage output, Heirs must strategize against the bosses based on their characteristics. However, currently team build around SPD based DPS servant is doing the most damage against all Boss Raid bosses. Therefore, we are changing strategy against the bosses so that more enemy HP & DEF based DPS servants are used in Boss Raid.   Just like Party Raid boss, bosses in Boss Raid will receive additional damage from certain type of attack so that Heirs can bring greater damage output by taking the right type of DPS class servant.   Please check out the table below for details:

3. Monument Skill Change   On top of the changes above, we will be adding new Monument skills that "Increase ATK every 10 seconds after the battle starts.Also becomes immune to [SPD Reduction] and [Skill Gauge Reduction] effect 90 seconds after battle starts."   There were two issues that we identified with Boss Raid. First was that the bosses were continuously prevented from using any skill at all. The other issue was that all Heirs had to focus on was doing more damage because the powerful attack from bosses wouldn't kill any of the servant in the team. Therefore, we are changing the bosses so that powerful attack from bosses will possibly kill targeting servant.   4. Combo Skill Usage Time   Even though Boss Raid battle technically lasts 5 minutes, the Boss Raid battle often lasts 7 ~ 10 minutes because the time-stops when a servant uses a Combo Skill. To get rid of the tediousness and to make it easier to repeatedly challenge Boss Raid, we are changing Boss Battle so that time doesn't stop even when a servant uses a Combo Skill.   5. Daily Reward Milestone Expansion / Reward Change   Many Heirs have been suggesting expansion in the Daily Rewards Milestone to reward Heirs for greater amount of damage. We will be expanding the Daily Reward Milestone with the Boss Raid Revamp. Furthermore, we will be adjusting reward milestone for Forest Monarch, Bastille as a response to balance adjustment. Please check out the table below for details of reward change. (The colored part is the changing part.)

As we mentioned before, we will be adding 2x Summons that allows Heirs to acquire two of each servant. Instead of regular summon that gives one of each servant, we believe that the new 2x Summon system will lower servant acquisition difficulty from Summon as it makes it easier for Heirs to reach 5 Transcendence with duplicate servants.   2x Summon is available for Fire / Water / Forest ★3~5 Summon Stone's Summon 10 Times, ★3~5 Special Summon's Summon 10 Times, and Rate+ Summon's Summon 10+1 Times.   2x Summon can be toggled with 2x On/Off button located on top of Summon 10 time(s) or Summon 10 + 1 time(s) button. When the 2x Summon is on, the Summon will consume additional 1,000 Karats every time Heir performs applicable Summon. Heirs will receive 2 of each Summon using 2x Summon.   Freezing Issue Notice   There has been continuous reports of freezing issue during repeat battle from the community. After identifying that this issue is worse for certain devices (LG, Xiaomi devices) or low-spec devices, we are testing a new build everyday as we take this issue very seriously. We want to sincerely apologize about the delay with bug fix. We will try to bring fixes as soon as possible.   That is it for today's Dev Note.   Lastly, it seems like some of our responses to comments on Moot or Facebook are sometime misleading, especially when we leave a short response since we have to respond to countless comments.   While we will continue to collect feedbacks through comments, we will compile the comments that can be answered to address them all at once in a Dev Note rather than responding to each feedback through comment. Please understand that we are always trying to check our communities for feedback even though we don't get to respond to each and every one of them.   We hope that the community understands our effort to improve quality of our feedback   Thank you.