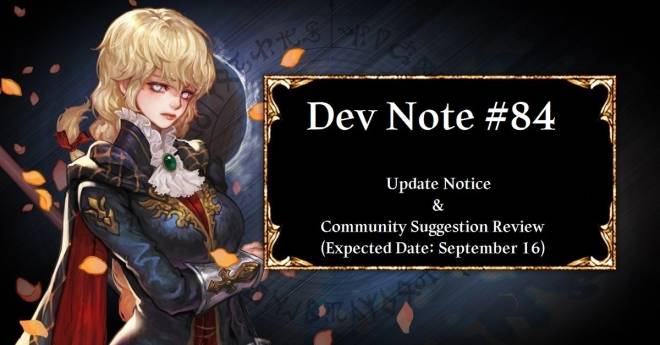 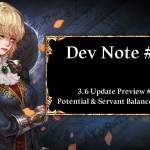 Dev Note #81: 3.6 Update Preview #2: Potential & Servant Balance Notice Greetings Heirs, In today's Dev Note, we want to go over Potential & Servant Balance. 1. AoE Damage Reduction Potential Equation Change / Numerical Value Change AoE Damage DPS servant started from [A] Sphinx, and currently there are several AoE Damage servants including the most recent Mildred. If we say that the main target of AoE servants' attack takes 1 damage, the rest of the servants take 0.3 damage. While numerically AoE servants are supposed to do less damage to other servants beside the main target, we see more and more battles where even the 0.3 damage kills enemy servants as we added more servants capable of doing even greater damage. Currently, there are 6 Normal Potentials regarding damage reduction: 3 potentials that reduce damage received by Multi-Hit Combo Skill by 20%, and 3 potentials that reduce damage received by AoE damage by 10%. Since these values add up, servant will receive only 10% of the damage equipping all the Potentials above. This means that a servant will still take 70% of the damage against Mildred that does a Single-Hit AoE attack or any other AoE servant who's Combo Skill is set to a Single-Hit even with the 3 Potentials that reduce damage received by AoE damage by 10%. When we first implemented Potential system, we wanted to provide a mean for Heirs to improve on what their servants lack to defeat the opponent. Given such intention, we judged that current AoE Damage Reduction Potential is rather underwhelming. In the 3.6 Update, we will be changing the equation for damage reduction due to Potential from Addition Equation to Multiplication Equation. Also, we will be improving the numerical value of AoE Damage Reduction from 10% to 20%. To provide more details of the equation: Current Equation: Damage = ( 1 + Potential Damage Increase - Potential Combo Skill Multi Hit Damage Reduction - Potential AoE Damage Reduction) After 3.6 Update: Damage = ( 1 + Potential Damage Increase - (1 - (1- Potential Multi Hit Damage Reduction)*( 1- Potential AoE Damage Reduction) ) ) To make the change more visual: moot.us

First of all, we want to let the community know that we are aware of efforts that Heirs put in providing feedback regarding Relation Effect. However, we want to reiterate that sniping through Relation Effect is a necessary system for us to manage servant balance in Heir of Light. Sniping with Relation Effect has been around for quite a while, and different servants found their spot in the meta based on the sniping. While we went through lengthy consideration about removing sniping with Relation Effect with this Relation Effect Improvement, we decided not to remove sniping with Relation Effect because it will be serious nerfs for Heirs that were using specific servants for sniping purpose.   While we will gradually adjust sniping with Relation Effects to reduce the tendency of it focusing too much on certain servants, we are planning on continuing sniping with Relation Effect. For those wondering about Lucrecia & Mildred sniping, we want to worry about this issue after 3.7 Update as we mentioned earlier. We must work on Lucrecia and Mildred balance before we consider sniping with Relation Effect. While there will be ways to snipe Lucrecia, we are very careful with our approach because we are expecting huge impact especially because her passive is so important.   Also, we saw many disappointments about Sofia sniping Carmilla. Many Heirs have been expressing their concerns and disappointments about sniping Dark Carmilla that may take anything between three months to a year to develop. We have already mentioned that Fire/Water Sofia was not designed for PvP in previous Dev Note. However, it is true that Carmilla's performance will be hindered significantly if she goes against Fire/Water Sofia.   We understand the concern from the community. However, we believe that the concern is only viable when significant amount of Heirs use Fire/Water/Light Sofia in PvP. We believe that Sofia will not be widely used in PvP for two reasons below:   First, we believe it will be difficult for Heirs to simply switch out Support or Healer servant with a new servant just to snipe a certain servant. It is quite difficult to alter a developed team because all Support and Healer servants have their unique characteristics. While it is technically possible sacrifice all other effects and switch out servants to snipe certain, we believe it is very difficult to do so.   Secondly, while sniping a certain servant will help Heirs raise their PvP win ratio if the sniped servant is widely used in PvP, sniping will only hurt the PvP win ratio if the sniped servant is not widely used among Heirs.   Ultimately, it will be very difficult for Heirs to add [Water] Sofia to the team to snipe [Dark] Carmilla not only because [Dark] Carmilla is not as common as other servants among Heirs but also because the synergy of [Water] Sofia with the rest of the team will likely be worse than the synergy of the servant [Water] Sofia replaced with the team.   Sniping with Relation Effect is always very difficult for us even starting from designing stage because our decision will end up creating snipes that cannot be avoided. However, we hope that Heirs don't think that their servants will become completely useless because of sniping with Relation Effect.   Lastly, we want to let the community know that we value the long-term fun of the game through proper balancing rather than making more money by releasing new servants. We have promised to take approach different from previous updates, and we are continuing to change.       Thank you.