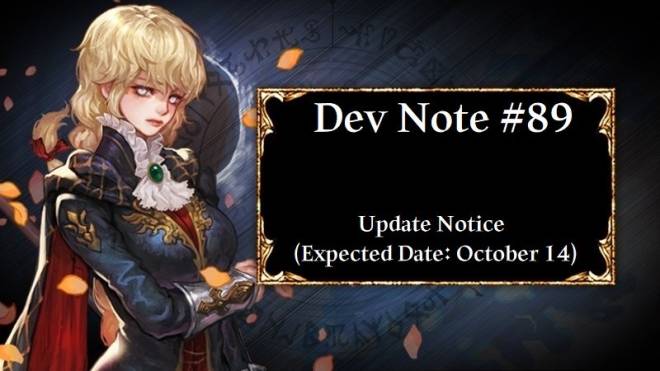 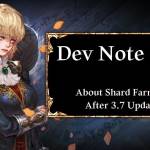 Dev Note #88: About Shard Farming After 3.7 Update Greetings Heirs, Many Heirs have been discussing about Shard Farming after the Update. Today, I want to go over some comments regarding Shard Farming. We went over feedbacks from the community to summarize the most popular feedbacks. 🔴Question: If I purchase Double Shard Pack or All in One Pack, will the guaranteed Shard Reward also double? 🔵Answer: Yes, it will. If you purchase Double Shard Pack or All in One Pack, the [Shard Reward] count will be doubled. For example, with Double Shard Pack or All in One Pack, Heirs will receive 200 Shard Reward count instead of 100 Shard Reward count when Heirs clear 100 stages. Therefore, Heirs will receive 10 servant shards for stages that give shard reward for every 20 stages(Early stages of Fire/Water/Forest Sanctuary). Those who didn't purchase Double Shard Pack or All in One Pack will receive 100 Shard Reward count for 100 stages cleared, receiving 5 servant shards. 🔴Question: It seems like the Shard drop for Light/Dark stages decreased significantly given that I play 550 stages. Sometimes, I end up obtaining 0 shards. Isn't this an error considering that I normally used to obtain 5 ~ 10 shards? 🔵Answer: No it is not an error. When we released the shard drop rate on August 2018, we stated that the shard drop rate of Light/Dark ★5 servants are 1.4%. The very last stages of Light / Dark Sanctuary give one shard reward for every 100 stages played. Therefore, the 1% of the servant shards are obtained through guaranteed shard reward while the remaining 0.4% of shards are obtained through drops. moot.us

While we wanted to guarantee relatively consistent acquisition of servant shards through the change, many Heirs have been expressing their disappointment about diminished excitement of acquiring servant shard due to lower drop rate. Based on results of surveys throughout global communities, we decided that we need to increase the ratio of shards acquired through drops.   Therefore, we will be making following changes:   ⭕ 1. Nat ★4 & ★5 Servants from Light/Dark Normal Explore & Sanctuary Stages   To decrease the presence of shard farming through guaranteed Shard Reward, we will be increasing the number of stages required to receive Shard Reward while also increasing the drop rate of Shard from stages accordingly. For normal Explore stages, guaranteed Shard Reward every 100 stages with 0.4% drop rate will be adjusted to guaranteed Shard Reward every 110 stages with 0.5% drop rate to give more presence to shards from drop. For Sanctuary stages, as we increase ratio of shard acquisition from drop, we are bringing additional increase in drop rate so that Heirs can acquire more shards. Ultimately, the total number of shards acquired in Sanctuary stages increased.

⭕2. Nat ★5 Servants from Fire/Water/Forest Sanctuary Stages.   In order to increase the total amount of shard acquired, we will be increasing shard drop rate while maintaining number of stages required to receive a shard. Ultimately. the total number of shards acquired will be increased just like Light/Dark Sanctuary stages. (We have checked that the increase in drop rate is quite significant considering the original drop rate. We believe Heirs will be able to tell the difference right away.) That's it for today. Please stay tuned for the next update.   - Flynn