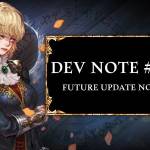 We recommend Heirs to make purchase of these items after the update. (Please remember these items have purchase limits.)   That's it for today.     Dev team is preparing various changes and new systems to bring more energy to the community.   Here is a little April Fools' event.   List below shows expected changes in 4.2 Update. (Expected 4/20 CDT) Some of the changes below are April Fools' jokes! Can you guess which changes are jokes? (We will reveal the answer in the next Dev Note.)     1. Guild Battle will be added. 2. Floor 13 ~ 15 for Omen/Heide Gear Dungeon will be added. 3. New Main stages that are even more difficult than Sanctuary will be added. 4. New servant Demian will be added. Demian is designed to synergize well with DEF Based DPS servants. 5. Multi-Fuse system that allows 10 Fusions at once will be added. 6. New Boss Invasion stage 6 ~ 20 will be added. 7. All Day Payback will account purchase between April 1st to 30th. April Payback starts on April 7th. You can exchange max point of 1,100,000   Thank you.   Flynn