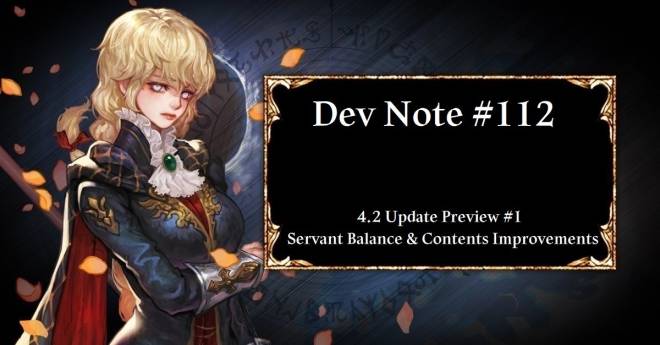 Greetings Heirs,   Were you able to figure out which expected changes from previous Dev Note were jokes?   1. Guild Battle will be added. 2. Floor 13 ~ 15 for Omen/Heide Gear Dungeon will be added. 3. New Main Stages that are even more difficult than Sanctuary will be added. 4. New servant Demian will be added. Demian is designed to synergize well with DEF Based DPS servants. 5. Multi-Fuse system that allows 10 Fusions at once will be added. 6. New Boss Invasion stage 6 ~ 20 will be added. 7. All Day Payback will account purchase between April 1st to 30th. April Payback starts on April 7th. You can exchange max point of 1,100,000   The answer was #3 & #6. The Main Stage Update is in fact scheduled for 4.3 or 4.4 Update instead of 4.2 Update. Also, while we do have plan to add more Boss Invasion stages, it won't be part of 4.2 Update. Also, we don't have plan of adding 20 stages yet either.   Today, we will go over servant balance adjustment and other miscellaneous changes that will happen in 4.2 Update.     ⭕Buff Removal   As we mentioned multiple times earlier, we will be adjusting "Remove all buffs from all enemies" effect as it was seriously hurting the balance between servants   Light Sofia, Forest Heylel, Light Heylel, and Dark Ignis will be affected by this change. "Remove all buffs from all enemies" will be adjusted to "Remove 3 buffs from all enemies."   We tested multiple variations of number of buffs being removed. Removing 4 buffs was almost as powerful as removing all buffs, and removing 2 buffs was simply not enough, damaging the usage of applicable servants. Therefore, we came to a conclusion that 3 buffs removal would be the most appropriate option.   Dark Ignis' "Remove all buffs from all enemies" had a penalty of removing one buff from all allies. Sometimes, Dark Ignis would do rather disappointing amount of damage even after removing DEF buff from target enemy because her own ATK buff was removed. However, as we are adjusting number of buff removed from all enemies to three buffs from all buffs, we determined that Buff removal on allies also needed adjustment.   Therefore, "Remove 1 buff from all allies" will be adjusted to "Remove 1 buff from all allies beside oneself."     ⭕AoE DEF Based DPS Servant Skill Ratio Adjustment   Currently, Dark Valkyrja is the only AoE DEF Based servant. Light Demian that will join Heir of Light in 4.2 Update will also be AoE DEF Based servant. Since AoE DEF Based servant was not playing its role properly, we will be making some adjustments.   1st Skill: 720% -> 828% (15% buff) 2nd Skill: 1260% -> 1449% (15% buff) Combo Skill: 6160% -> 6468% (5% buff)   Also, Water/Forest/Dark Demian has a Passive that "Gives x% of own DEF to DPS servant." We believe Demian would make a great team with DEF Based DPS servants.     ⭕Ignore DEF DPS Servant Special Potential #4 Adjustment & Addition   Ignore DEF DPS servants didn't have a proper skill in Special Potential #4.   Therefore, we will be adding a new Special Potential to that "Increase ATK by n% for 30 seconds upon skill use."   We will be adding the Potential above to Melee Ignore DEF DPS servants. On the other hand, we will replacing old Potential that "Increase ATK by n% for 30 seconds upon active skill use." (Max 40% at S Rank) with the new Potential above for Ranged Ignore DEF DPS servants.   Water John Wick and Fire Ankou will be excluded from this change since they already have such effect in Passive.     ⭕Abaddon Monument Improvement   When the Monument knocks back, it reduces aggro of enemy significantly for 20 seconds. Also, it is designed so that the aggro doesn't get focused on Tank servant even after the Tank servant uses Taunt if Monument uses knock back.   This became a bigger issue when Heirs use both Light/Dark and Fire/Water/Forest servants in their team. While it wasn't completely impossible to overcome this issue using perfect team comp, many Heirs have been asking us to consider mixed usage of Light/Dark and Fire/Water/Forest servants.   Therefore, we will be lowering difficulty of Abaddon by allowing Tank servants to have guaranteed aggro upon using Taunt on top of reducing the duration of aggro reduction from 20 seconds to 10 seconds.   This change will be applied only on Abaddon for now. (Excludes Explore/Sanctuary/Dungeon) We will look into expanding this change to other contents after more thoughts.     ⭕Gear Dungeon (Omen & Heide) 13 ~ 15th Floor   After the Transcendence Update, we are in preparation in adding new difficulties for all contents. Currently the Gear Dungeon 12th floor is balanced to difficulty of T3 Teams which allows all users to clear it without any difficulties. By looking at this balance in 550 runs, it puts the users in a state where they are satisfied in obtaining 2 ~ 3 legendary gears that they wanted. As a result, it makes users to spend many countless hours in obtaining 19+ 6 * legendary Gears.   The 13th ~ 15th floors holds difficulties that fits the Team's growth due to the Transcendence expansion, however, it will have rewards that matches the difficulties of each floor. Thus, you will be able to obtain gears that you want with reduced amount of playtime.   Gear Dungeon Expansion details are listed below.

* Difficulty Balance is based on a team with servants in similar Transcendence level.   Omen and Heide Dungeon have specific strategies but they have requirement and difficulties to match those strategies which will be a fun challenge. We are looking forward to seeing which team you guys would use to conquer the 15th floor.     ⭕Group changes due to the Transcendence Expansion With Transcendence Expansion, Growth Score of many Heirs are also increasing. As a result, many Heirs have been joining Diamond group. Since Diamond is where a lot of top tier players are placed, we saw the need to adjust the standard as below.

The upcoming adjustment is to keep the 1~2% high-end users in the Diamond Group and also to avoid a situation where users with low growth score to be placed in the high-end group and have difficulties in obtaining wins.   The group adjustment will be made in the 4.2 Update and will be in effect after the season calculation.   (The group may undergo more adjustment in the future after constant monitoring the spread of overall user's growth scores)     ⭕Auto Repeat Pack I Change   In the previous dev note, we have announced that the base auto-repeat count will be increased to 150 and will be offered to all users.   Thus, the benefit of 150 auto-repeat count will be removed from the Auto-Repeat Pack 1 and a new benefit / reward will be added.   The daily Karat amount will be increased from 140 to 200 The daily Valor amount will be increased from 50 to 300   If you are currently subscribed or have purchased the Auto-Repeat Pack I, please see the upcoming changes and decide on extending the pack.     ⭕Mass Invasion Improvement   Mass Invasion had issue with efficiency due to long clear time for a stage due to the high level of bosses and very low servant shard drop rate. Thus, to allow users to obtain more servant shards the mass invasion entry will be reduced from 10,000 to 5,000 but significantly increase the shard drop rates.

With the reduced entry amount of 5,000 and increased drop rate, you will be able to obtain more servant shards with reduced play time. Also valor usage compare to the amount of shards obtain will be greatly reduced.   Especially for level 60 boss, there were situations where you couldn't obtain 500 shards even after completing all 10,000 entries. However, after the Mass Invasion improvement, you will be able to obtain roughly 550 shards which will allow you to obtain at least 1 servant. Also, if you have the 2x shard benefit, it will allow you to obtain 2 servants.   We are planning to set the next mass invasion bosses with most used servants in the game ([Water] Mildred, [Water] Lucrecia, and [Forest] [A] Sphinx) so that many can enjoy Mass Invasion after the 4.2 Update.     That's all for today's Dev Note. For the next Dev Note, we will be discussing about the Guild War   Thank you   Flynn