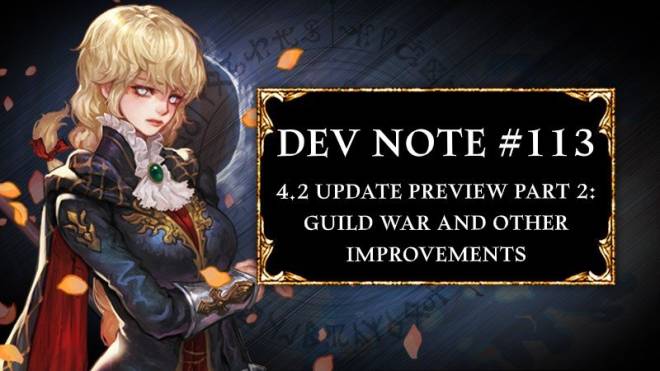 Greetings Heirs,   Today we will go over Guild War and other improvements.   ⭕Guild War   There have been numerous feedbacks asking for Guild War for a quite a while. While we have been going through active discussions about Guild War, we have been hesitant about developing such content. Hesitation was mainly due to the fact that Guild War can easily end up becoming a content for very small group of players.   Despite our concern, we understand that Heirs have been asking for Guild War for a good reason. We are also well aware of potential of Guild War content. Therefore, we will be adding Guild War in 4.2 Update. However, to improve the quality of the content, we will be taking approach different from previous content updates.   We will be working on Guild War content starting from 4.2 Update to start Beta until 4.4 Update. We implemented very minimum reward, and Shop using Guild War Point, which is in fact the main reward of this content, will not be open during Beta period. Please note that balance/reward/system regarding Guild War are subjects to changes.   Until now, our ability to actively implement feedbacks were limited because contents were implemented to actual server and rewards were already being sent out. However, since we are starting Guild War with Beta phase in rather controlled environment, we will be able to implement greater amount of Heirs' feedback real time. We will continue to monitor suggestion section while we also carry out various polls.   Today, we will summarize some important details about Guild War.   For Heirs who missed out, please check out details of Guild War in 4.2 Update Preview: https://bit.ly/2KdipqD 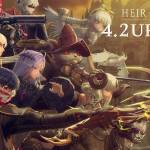 ⭕Guild War Summary   Guild War takes place twice a week, Wednesday and Sunday. Each Guild Member can set up one DEF Team.   Guild Master or Officer will place the DEF Teams between 00:00 ~ 11:00 on the day of Guild War You need to place minimum of 15 DEF Teams in order to participate in Guild War. Guild Members can participate in Guild War between 12:00 ~ 23:30.   ⭕Guild War Battle   All Guild Members get 3 attempts to attack each day. Guild Members will earn Badges based on their battle result against opponents. Final result is determined based on the sum of number of Badges obtained through attack and number of Badges remaining in DEF Team. Guild War Rank is determined by Victory Point that changes based on result of Guild War. Individual's Participation Rank will be determined by number of Badges obtained through attacking in Guild War. Heirs can earn Guild War rewards based on Guild War Rank and Individual's Participation Rank.   Each battlefield has its own unique characteristic. Please check out details of each battlefield shown below.

In the Throne Room, we tried to bring difference by deactivating Co-Destruction feature that has been a big issue among the community recently.   In Chapel, DEF of DPS servants will be increased so that DPS servants take less damage from AoE attack and DEF-Based DPS servants do greater damage.   In Tower, we implemented a special feature that benefits 4★ servants so that Heirs can achieve victory without 5★ servants with high transcendence.   While Guild War will be 4 vs 4 battle similar to Infinite PvP, Potential and Team Passive that are used in PvP will not be applied. This means that Heirs won't be able to strategize against AoE DPS servants that stands out in 4 vs 4 battle using Potential. This is why we applied 50% damage reduction on AoE attacks in all battlefield.   ⭕Badge Acquisition to Win Guild War   As we mentioned earlier, Badge Acquisition practically determines the result of Guild War. Please refer to the table below for details on Badge system in Guild War

When attacking) Guild will obtain more Badges if more Guild Members succeed in their attack. Make sure all your Guild Members participate to get as many successful attacks a possible. (Since Heirs can obtain a Badge even upon Defeat, it is better for Heirs to at least participate in Guild War in order to claim 1 Badge regardless of their team.)     When defending) Powerful Defense team will allow minimum amount of Badge to the opponent if the opponent fails in his attack. On top of that, it will waste an attack attempt from the enemy Guild. All Guilds should focus on their DEF team setting to give away minimum amount of Badges to opposing Guilds.     ⭕Guild Battle Reward   As we mentioned earlier, Guild War reward will be adjusted when we officially launch Guild War. However, concerned about failing to reach enough participation without any reward, we implemented a small amount of reward.   Here is a list of main rewards from Guild War   1) Guild War Victory/Defeat Reward Upon Calculation 2) Guild War Individual Participation Reward 3) Purifying Ground Access upon winning Guild War     ⭕Guild Improvement   As we add Guild War to Heir of Light, we will be removing Guild History & Guild Training Ground. After the patch, servants placed in your Guild Training Ground will automatically leave Guild Training Ground.   ⭕Future Update Directions   Many Heirs have been commenting that the Heir of Light failed to bounce back. Some comments also mentioned that the community is not gaining the energy back again as fast as it should.   While we would also love to see immediate changes, it is quite difficult to do so. We believe it will require good amount of time and constant improvements to recover trust and become a better game in general. While immediate changes may not be visible, we will constantly improve our game so that even F2P players can enjoy it. While we are not focusing on advertising our game since we are working on stability of Heir of Light, we will soon focus on acquiring new players through advertisements.   While we shared some details in previous Update Preview, here are some additional details.   ⭕3★ Servants into T. Shards   Since the last update, the summon rate has increased 2 ~3 times. Also, the value of summoning has increased due to the new summon system where you are guaranteed 5★ after certain amount of summons. The summoning has gotten a lot more exciting due to more frequent appearance of 5★s which are creating instances where it's more beneficial to spend karats on Summons rather than Valors.   But we were not satisfied and wanted to find an efficient way to use 3★ servants that is obtained from summon. Of course they can be used in craft and fuse as materials to take another shot at obtaining better servants. However, we wanted to put more positivity in summoning, thus we decided to add a new feature where you can convert 3★ servants into T.Shards. Just looking at the current craft system, 1 5★ servant can be obtained by collecting 500 3★ servants. (10 3★ Servant = 5 common souls, 250 common souls = 1 5★ summon). However after the 4.2 Update, 1 3★ servant can be converted into 1 T.Shard which means that you will be able to obtain 500 T.shards with 500 3★ servants. T.Shards can be used to any servants with corresponding elements so we think that the new system will be more efficient.   Overall, we believe that the new system where you can convert a 3★ servant into a T.shard will bring more value and fun in summoning for all heirs. This may also help with situations where you couldn't summon due to a full servant inventory.   Additionally, this feature will be same for Light/Dark servants. Since it's much harder to obtain Light/Dark T.Shards compare to Fire/Water/Forest T.Shards, it will definitely be more beneficial.     ⭕Multi-Fuse Feature   Fuse system has been revamped to remove the inconvenience that everyone have experienced by clicking the fuse materials 1 by 1. From now on, you can fuse up to 10 at a time.   In fuse, the fuse rate changes based on the NAT grade of servants you wish to fuse. Currently, it's hard to tell the NAT grades of servants during fuse, which may have caused some Heirs to fuse NAT 4s with NAT 3s. However with the new revamp of Fuse system, we have decided to add NAT grade of servants in the fuse display.   The fuse rate will remain the same even with multi fuse system. Many have suggested to increase the fuse rates after increasing the summon rates in the previous update. However, we think that it's not the proper time to increase the fuse rates as we are trying to focus on summons at the moment. So we are going to keep the same rates for the fuse. Additionally, the display of NAT 5★ rates are tricky and not straightforward due to usage of terms such as low and high. So the terms to display NAT 5★ rates will be changed to Not Available, Available, and Guaranteed.

⭕Awakening Materials   Currently, we are providing awakening materials to everyone in many different ways. However, there are some time restrictions in obtaining awakening materials and also it is sometimes overwhelming due to the large number of servants to awaken. Because of these hardships many have been suggesting for more ways to obtain awakening materials.   Awakening Dungeon 11th and 12th floor have daily entry limit which has a time restriction as we have originally intended. For users who wishes to speed up awakening their servants, we have constructed a way where you must farm Awakening Dungeon 10th floor for greater awakening stones to craft supreme awakening stones or purchase awakening stone packs. Many are thinking that you must make IAP to speed up the awakening process and this idea is related to the auto-repeat count. Looking at the 10th floor as an example, you will be able to obtain around 40 greater awakening stones after 100 attempts (2 Supreme Stones). However the base auto-repeat count was 10 which made it very difficult and problematic to run 100~ 600 times which could have made everyone feel high difficulty in obtaining awakening materials.   However, the base auto-repeat count will change to 150 thus, you can easily farm 600 times a day (150 count x 4 per day). If you run 600 times a day and also run 11th and 12th floor, you will be able to obtain 12 more supreme stones. Also, if you include all the rewards from the daily mission, weekly mission, boss raid, and other contents, it will be possible to approximately obtain 20 supreme stones per day. Thus we think that it will be much easier to awaken your servants.   Additionally, we are planning to reward everyone with Awakening Stone select as the update reward. (Common/Greater/Supreme Stone x 60 each)   We are gonna continue to run events such as All Awakening Dungeon Open and Awakening Dungeon Entry 100% Discount in the future. Also, we are planning to provide more ways to obtain awakening materials with more events to ease the awakening for the early game stages.   Also, we are planning to add awakening materials in craft, shop, and even purchase with different in game currencies. These are not planned to be added in the 4.2 update but in the later future updates. Instant awakening is being considered to be added in the shop so that we can ease the 1st ~ 3rd Awakening as it is more needed in the early game stages.   That's all for today's Dev Note.   The 4.2 Update is planned updated on 4/20 CDT. We expect that the 4.2 update contents such as 150 Auto-Repeat count, Mass Invasion Revamp, and T.Shard conversion will provide a lot of help for new and F2P users.   Also, we believe that the Guild War and Abaddon Tower Improvement will be a satisfying update for Mid-Level users.   We will continue to implement suggestions from players and community to make the most enjoyable game to everyone.   Thank you.