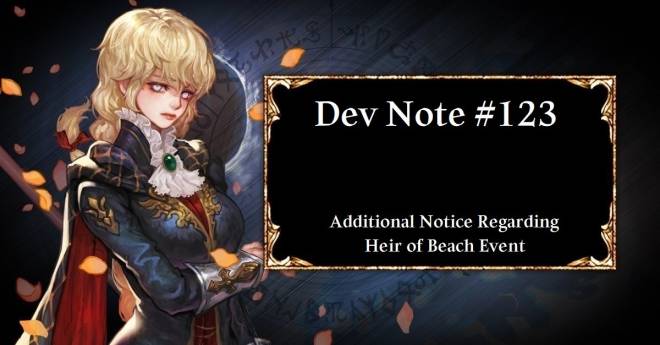 Greetings Heirs,   After the update last week, many Heirs have been participating in improved Guild War while making use of the new Decompose system. On top of that, Heirs have been actively exchanging items through Heir of Beach event.   Many Heirs expressed disappointment about termination of event that gave Heirs 1,000 & 5,000 Valor depending on Purifying Ground completion count. We wanted Heirs to make use of the new Heir of Beach event that allows Heirs to exchange Beach Ball for Valors to replace Valor supply from Purifying Ground completion event.   However, we are well aware of general Valor shortage Heirs are going through. While Heirs can obtain Valor using Beach Ball, we understand that Heirs are collecting Beach Ball for other rewards in the event as well. To address this issue, we will be making two changes below.   First, Beach Ball drop rate from Purifying Ground will be increased from 3.3% to 5%.   To better replace the previous event that gave Valor according to Purifying Ground completion, we will be increasing drop rate of Beach Ball in Purifying Ground. This will allow Heirs to obtain about 100 to 140 more Beach Balls per day from Purifying Ground. We hope that this change will help Heirs obtain Valor or rewards they want.   Second, Heirs can now obtain Beach Ball from Cult Training Ground.   We noticed that some Heirs are having difficulty obtaining Beach Ball from Infinite PvP content due to its natural difficulty. To allow more Heirs to obtain Beach Ball, Cult Training Ground will start dropping Beach Ball. Many Heirs suggested allowing Heirs to obtain Beach Ball from other contents such as Secret Dungeon, Mass Invasion, or Party Raid. When we prepare an event, drop rate of event items are implemented after careful review of various factors such as balance between different events. While we won't be able to make immediate change to the current event, we will make sure to consider various suggestions that Heirs made when we plan the next event.   We will try to make changes above as soon as possible.   Thank you.   Flynn