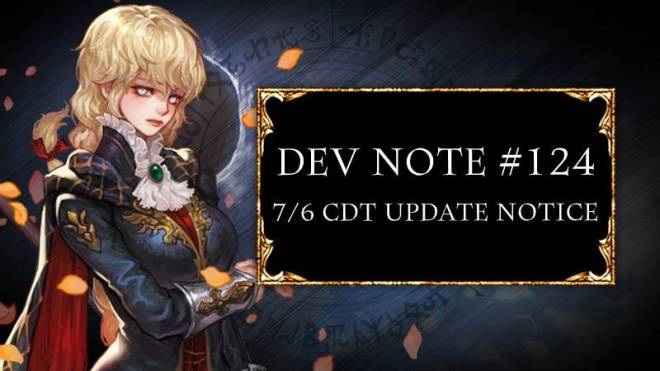 Greetings Heirs,   Today, we would like to discuss the upcoming update on 7/6 CDT.   ⭐️Combine   The combine is one of the contents that has been loved by Heirs since the opening of the content. However, due to the requirement to grow material servants to 5★, it was mostly used by the current Heirs rather than new Heirs. Thus, we decided to reduce and lower the requirements of material servants to combine to allow more range of Heirs to use Combine.   NAT 4 servants, material servants of NAT 5 servants for Combine, can be used as a material at 4★ level 40. (The awakening requirement will remain same and same requirement will apply for NAT 4 Dark/Light material servants)   Also, NAT 3 servants, material servants of NAT 4 servants for Combine, can be used as material at 3★ level 30.   The new changes for material servants' requirements will apply to Water Heylel Combine as well.   The new NAT 5 servant combine will be Fire Ignis and Water Lucrecia. (The combine duration will be 7/6 CDT ~ 8/3 CDT and can be combined 1 time per duration)   ⭕️Servants required to combine Fire Ignis > Fire Hern > Water Usher > Forest Enoch > Light Sirucus   ⭕️Servants required to combine Water Lucrecia > Fire Enoch > Water Father Hopkins > Forest Koume > Dark Medjed (The NAT 4 servants can be combined 3 times per duration)   ⭐️Servant Balance   ⭕️Light Ignis The 1st skill which contains the effect to reduce all enemies DEF is a one of a kind skill that's unique to Light Ignis. However, the 1st skill usage is low and rarely used. So the effect to reduce all enemies DEF will be moved to the Combo Skill. The 1st skill will have a new effect which will remove 1 enemy buff.   Also, the passive skill will be improved by adding a 40% chance to fill its combo skill by 100% when the battle starts effect.   ⭕️Dark Blavatsky Out of all the Light/Dark Servants, Dark Blavatsky is the only servant that targets Heylel with its passive skill. However, the 1st skill has DoT damage and stat increase upon transcendence is focused on accuracy. Also, the passive skill is considered "weak" compared to other servants which are the reason why Dark Blavatsky is not receiving much love as it should.   Thus, the stat increase upon transcendence will be changed to SPD and "Removes 1 buff from all enemies when a Combo Skill lands as Crit Hit" effect will be added to the passive skill. The team passive will be changed to "ATK of all elements allies increase by 57% at PvP" (Servants who are similar to Dark Blavatsky, DoT skills and stat increase upon transcendence is focused on accuracy, will also be changed in the future servant balance)   ⭐️Guild War Improvement   There was a huge change for the Guild War Passive/Effect in the 4.4 Update. The changes were regarding the Throne Room and Chapel Effects.   Currently, the Throne Room effect deactivates all potential skills except special potential skill #2. We deactivated all passive skills which caused many issues including balance issues. Thus, we decided to make the Throne Room effect the same as the Chapel until we create a new effect.   The Chapel effect is "Immunity to Petrify, Freeze, and Stun" and "Silence" will be added in the upcoming update. Thus, after the 7/6 CDT update, the Chapel effect will be "Immunity to Petrify, Freeze, Stun, and Silence"   Also, an issue where the Guild War effect would not activate correctly to servants who are revived under certain situations will be resolved.   Many Heirs have voiced and commented that they feel confused with Guild War effects due to frequent changes in effects even though the content is still in the beta stage. We understand how all Heirs feel but please understand that we are trying our best to test and find the most optimal guild war effects during the beta stage. Also, please note that the Throne Room effect is planned to be changed to a new effect "Special Potential Skill #4 Deactivated" in the 4.5 update which is planned to be at the end of July.   ⭐️Other Improvements The Abaddon Tower Hell 60 Floor Reward will be changed. > Previously: Abbadon Tower Hell 60 Floor Reward - Skill Bun x 1 > New: Abbadon Tower Hell 60 Floor Reward - Light/Dark T.Shard x 50   Boss Raid Water Ragna's DEF will be increased and damage based on enemy HP debuff effect will be increased. Thus, Servants that deal damage based on enemy HP will retain its damage output but damage from other ATK based servants will be reduced.   ⭐️Other Bug Fix   We understand that the following issue/bugs were severe issues and we apologize for not resolving them as soon as possible.   > An issue where the last hit of the combo skill of Ifrit equipped with the Avatar would not deal any damage in the Party Raid & Boss Invasion will be resolved. > An issue where Light Oracle/Spiegel's stun passive would only apply to the target it's attacking rather than all enemies will be resolved.   ⭐️End of Summoners War Collaboration Avatar   All summoners war collaboration avatars were available in the shop for purchase even though the collaboration has ended. Many days have passed since the end of the Collaboration, so we are planning to end and remove Summoners War Collaboration Avatars after the 4.5 update that's planned to the held end of July. If you did not purchase Summoners War Collaboration Avatars yet and are planning to purchase them, please note that they will not be available for sale after the end of July.   That's all for today's Dev Note   Thank you