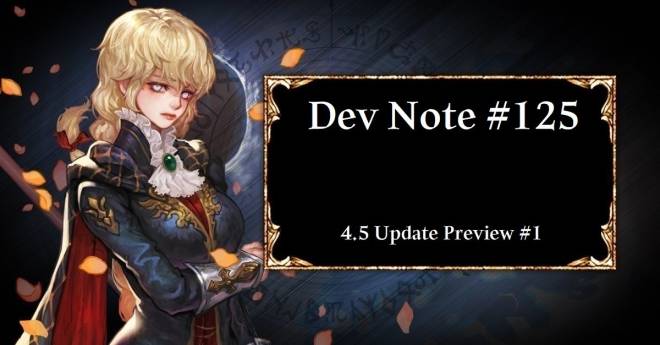 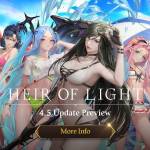 While sharing some more details from what was already shared above, we will be sharing some details that weren't mentioned on the Preview.   ⭕Corrupted Waterway   While Heirs first focus on their favorite Fire/Water/Forest servants, Heirs tend to take interest in Light/Dark servants as they make progress in Heir of Light.   Allowing Heirs to collect & utilize various servants is one of the biggest goal of Heir of Light. With this update, we wanted to promote development of Fire/Water/Forest servants while giving Heirs chance to further Transcend Fire/Water/Forest servants with good rewards.   By adding rewards that include materials for Light/Dark servant development in area 19 & 20, we wanted this content to be serve as a first step for Light/Dark servant development.   We discussed rather we should release Light/Dark version of Corrupted Waterway this update internally. However, due to the content's difficulty, we will be opening Light/Dark Corrupted Way in the future, while releasing only Fire/Water/Forest Corrupted Waterway this update. (Since we will be opening it later, we labeled it "Coming Soon")       ⭕New Servant Teresia   We are notifying release of the new servant Teresia much earlier than usual because Teresia's release has a lot of meaning behind it.   Fire/Dark Teresia are Healer class servants that block Caesar's Passive. It's been 6 months since we released Caesar, and Caesar has been a powerful Tank servant for a while. We decided it is time to make sniping servant for Caesar.   Currently Light Heylel is probably the best Healer servant. We believe she is still quite strong even after a nerf. We wanted Dark Teresia to be useful to fight against Light Heylel.       ⭕Ignore DEF DPS Servant   We believe some Heirs must be worried that sniping of Caesar will bring another domination of Ignore DEF DPS servant especially because Ignore DEF DPS servants have been performing quite well with Co-Destruction that cancels Caesar's Passive.   The problem with domination of Ignore DEF DPS servants is that since these servants can deal great amount of damage consistently, Tank servants often cannot survive the damage of Ignore DEF DPS servants. Sometimes, Ignore DEF DPS servants successfully take out Tank servants with 2 higher Transcendence.   "Many Heirs from Discord have been bringing up this concern about damage output of Ignore DEF DPS servants, which is why we will be adding Normal Potential such as Ignore DEF damage reduction. (We are currently testing this Potential, and we believe it will arrive within August. This will allow well developed Tank servants to survive Ignore DEF DPS servants. We wouldn't see this as a direct nerf to Ignore DEF DPS servant.)"       ⭕Combo Skill Speed Change   Many Heirs commented that Infinite PvP improved a lot thanks to improved Combo Skill speed in 4.4 Update. We will expand this change to PvP, Global Infinite PvP, Guild War, and Cult Training Ground.       ⭕Additional Feedback Reflection   - We have been trying to replenish the Valors spent in Purifying Ground through various ways. While Heirs liked the events, many Heirs wanted to see Valor support through an in-game system rather than events. Therefore, we will be adding Purifying Ground mission to give more Valor. (Once current Beach Ball event ends, we will be bringing back slightly altered version of Purifying Ground Valor event with next Update.   - We finally added Guild Invite function. Through additional Updates regarding Guilds, we are looking forward to see more active Guilds in a long term. We are also looking into ways of supporting community activity of Heirs. (August Update will have various features such as Guild Level update and Guild Level effect.)   - Opponent's servants' level will display in yellow once they reach max level. This will allow Heirs to know about opponent's Transcendence stage.     That's it for today.   We will have another Dev Note tomorrow so stay tuned.   Thank you   Flynn