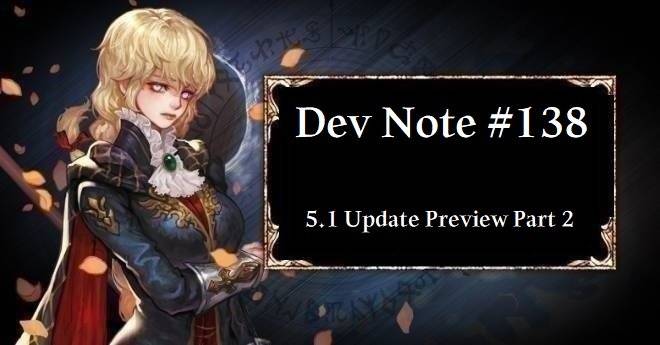 Greetings Heirs,   The 5.1 Update is 3 days away and many may have been anxiously anticipating for the next dev note. Many have heard from our comments but just to let everyone know that the T3 and T5 servants you obtain from summon can be used instantly for Transcendence EXP.   Today's Dev Note, we would like to discuss more about Ban Pick PVP, 7★ Gear, and Gear Dungeon Expansion that were mentioned in the 5.1 Update Preview.   ⭕5.1 Update Preview: https://moot.us/lounges/178/boards/794/posts/4930233/notice-5-1-update-preview 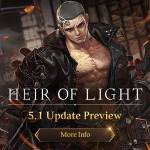 ⭕Ban Pick PvP   The PvP became unpopular content after the introduction of IPvP and other new contents. We have been continuously thinking about new PvP contents that many users would enjoy, thus we came up with Ban Pick PvP.   When you are looking at your own info in the Ban Pick PvP, you can see both Main and Sub team. However, when looking at other users Ban Pick PvP info, you can only see their Main Team. You may be able to predict how your opponent may have set their sub team when facing them in Ban Pick PvP.   When the Ban Pick PvP is updated, some may want to ban a tank class, healer class, or even support classes. So many different situations exist in the baning phase, thus we hope to see that many users will think deeply in their strategies in Ban Pick PvP.   The Ban Pick PvP will reset on Thursday 11:30 PM Server Time. The originial PvP content will be replaced by Ban Pick PvP and the ranking / rewards will remain in the same level as the original PvP. The Ban Pick PvP season calculation will be from after the 5.1 update till 11/12 11:30 PM and season rewards will be rewarded after the calculation.   ⭕7★ Gear / Omen and Heide Dungeon Expansion   Everyone tend to care a bit more about the HP stat so that the servant doesn't die from the AoE skill in high difficulty contents. You also need to focus on Crit DMG stat for ATK based DPS, DEF based DPS, and SPD based DPS to increase their damage output. Thus, we believed that the gears needed an upgrade as they are one of the main components in servant growth.   Thus, we decided to add 7★ and expand the Omen and Heide Dungeon to 20th Floor where you can obtain more 7★/6★ Gears.   Unlike previous expansion, we decided to add 16 Floor ~ 20 Floor at once. The reason for adding multiple floor at once is because the difficulty between each floor will be much higher if we add fewer floors. So from now on, we are going to take similar approach as the Gear Dungeon expansion for other contents where we evenly add difficulties per floor and add multiple floors at once.   For Omen and Heide Dungeon, you will only need to clear the stage once in order to activate the Skip feature. (The star clear will not affect it) You will be able to obtain gears much faster than before as 7★ gears will start droping from 16 Floor. The difficulty of Omen and Heide has been set to be a bit higher than normal but we believe that you will be able to find a strategy to clear the dungeon and even reach 20 floor.   ⭕Boss Raid Reward Expansion   We found out that many Heirs have been scoring points in Boss Raid that exceeds Daily Reward point range. Therefore, we will be adding 5 additional reward tiers to Daily Reward in 5.1 Update. Heirs that have been scoring outstanding points will be able to receive additional Conversion Stone and Potential Change Stone as additional rewards. We believe this will also motivate other Heirs to score higher points.   ⭕Guild War Victory Point Reset   After 5/1 Update, we will be resetting Guild War Victory Points. Starting with 1,300 Victory Points for the 1st place Guild based on current rank, we will be subtracting 5 Victory Points per rank. We will regularly carry out Victory Point reset to prevent rank from being fixed due to the increasing gap between higher ranking guild and lower ranking guild.     ⭕Notice Regarding Farmable Servants' Shard Usage   As we mentioned in the previous Dev Note, required Transcend EXP for farmable servants will be reduced to match the required Transcend EXP for non-farmable servants. We notified Heirs earlier that we will be compensating for exceeding Transcend EXP for servants that are close to or already reached 10th Transcendence by giving out T.Shards of the applicable element.   Please note that servant specific shards that Heirs own will not be counted toward compensation unless they are used as Transcend EXP. We recommend using all your shards as Transcend EXP before the Update.   Ex) If an Heir owns 9T Light Heylel with 20,300 T.EXP (Already consumed all Light Heylel shards) : The Heir will receive compensation for the exceeding amount of EXP and receive 10,000 T.Shard   Ex) If an Heir owns 9T Light Heylel with 20,000 T.EXP and 300 Light Heylel shards. : The Heir will receive compensation for the exceeding amount of EXP and receive 9,700 T.Shard, but there won't be any change to Light Heylel shards that the Heir owns.   That's it for today's Dev Note. Please feel free to leave any feedback in the comment below. Please stay tuned for 5.1 Update on 11/9.   Thank you.   Flynn