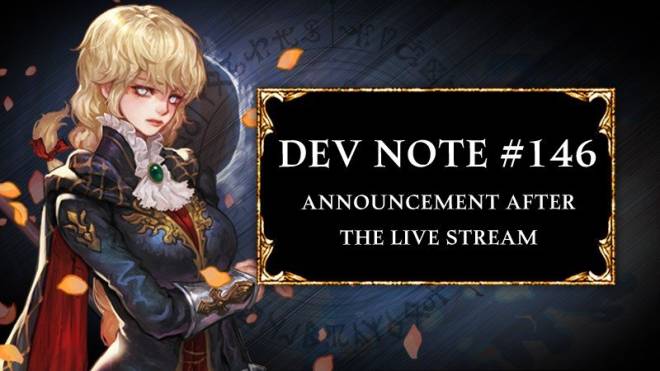 Greetings Heirs,   We held a live stream on 2/8 Friday (KST) where we answered many questions. The live stream was in KR so many users in other regions have missed the live stream. Thus, we want to share information that was shared in the live stream.   ⭐ Bond Ticket and Decompose   Many have suggested purchasing bond tickets with karats and increasing the decompose limit per week. We have decided to implement those two suggestions and made a promise in the live stream.   For decompose, we have been debating about how to change the decompose limit. We had in mind to allow 1 decompose for Fire/Water/Forest and 1 decompose for Light/Dark per week. But concluded that it would be best to just make it 2 decompose per week without any elemental limits.   For the Bond ticket, we are expecting to add the option to purchase the bond ticket with karats in the early March update. The increase in decomposing is expected to be implemented in the 5.5 update and will try our best to make it in time.   ⭐ Purifying Grounds   For servants that have high growth scores usually take around 5~6 hours to complete purifying grounds 550 times. Many have voiced that it is very difficult to continuously run purifying grounds and that they have to give up sleep to run them. To solve this, we are going to increase the purifying ground time but increase the rewards. Completing purifying grounds 550 times may take up to 8 hours but will receive more rewards due to increased duration. This change is going to be developed and will be implemented in the future.   ⭐Suggestion Implementation   The new changes that are listed below are suggestions that we have decided to implement in the future. The suggestions were received in the live stream and live stream board.   🔹 "It is too difficult to grow servants due to high transcendence exp requirements"   We are going to add the treasure box and growth support box in the 5.4 update. Also, we are going to make it easier to obtain materials for transcendence in the 3rd anniversary 5.5 update. We want users to have fun in growing their servants rather than being stressed out.   🔹 "Please make it easier to change potentials"   Many have suggested make the potential skill rerolls to be convenient as the gear rerolls. We will start the development to implement this suggestion into the game.   🔹 "Please increase the max capacity of the gear materials"   There is an inconvenience that many experiences during the gear craft because sometimes the amount of gear materials needed to craft is higher than the max capacity of gear materials.   We will try our best to increase the max capacity.   ⭐ Sanctuary Expansion Notice   The total amount of Sanctuary stages will increase from 113 stages to 180 stages in the 5.4 update. The star clear rewards will change and will be composed of more rewards. The star clear rewards will reset after the 5.4 update.   That's all for today's Dev Note.   Thank you   **The live stream will be edited and will be uploaded on Heir of Light Official YouTube. English subtitles are expected to be added in the near future.