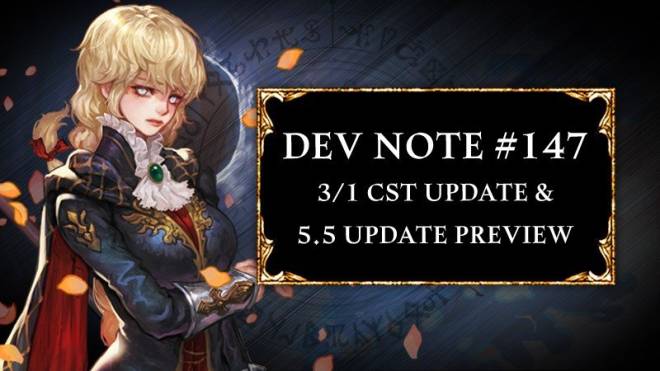 Greetings Heirs,     We held a 2nd live stream on 2/26 Friday (KST) and we hope that everyone enjoyed it.   The live stream was in KR so many users in other regions have missed the live stream.   Thus, we want to share information that was shared in the live stream.   ⭐ 3/1 CST Update Contents ⭐   ⭐ Bond Ticket - Karat Purchase Added During the 1st live stream, we discussed with all the viewers that were present at the live stream and negotiated the price. The price of karats for Bond Ticket will be 10,000 Karats and can be purchased once a month. Bond Ticket was content that many will enjoy so, we decided to add it as soon as possible.   ⭐ PvP Ticket - Max Cap Increase The max capacity of PvP Tickets will be increased from 10 to 20. Also for everyone's convenience, we have added 2 new PvP ticket tickets - PvP Ticket Max (20 tickets) and PvP Ticket x 10.   ⭐Servant Balance The servant balance for the 3/1 CST update will be regarding Light Mildred and Forest/Light Ignis.   > Light Mildred Light Mildred's passive seemed weak due to increase damage to only Dark Servants. Thus, the passive will be changed to increase damage to all elements except Light Servants.   > Forest/Light Ignis Forest/Light Ignis relation target was [A] sphinx with passive to reduce [A] Sphinx's SPD by 80%. This relation effect seemed week thus it will be changed to "block it's passive". Also, the Light Ignis passive accuracy rate will be increased from 40% to 50%. * Light Ignis Passive - 100% chance to increase Combo skill gauge upon a battle   ⭐ 5.5 Update Preview ⭐   ⭐ All in One Pack Free Trial & First Purchase Sale After the 3rd Anniversary update, the All-In-One Pack free trail will be added. The All-In-One free trial will be for 7 days. After the free trial, it will be under special sale for $29,99 for the first purchase. This benefit will not only be available for the new user but to all existing users who are currently receiving All-In-One Pack benefits.   ⭐Purifying Grounds - Rewards Increase As mentioned in the 1st Live Stream, the maximum purifying grounds time has been extended to 8 hours. Also, the rewards have been increased due to the time increase for purifying grounds.   The average time has been increased 1.33 times (Fire/Water/Forest Servants) and 1.73 Times (Light/Dark). We have increased the rewards as much as the time increase for purifying grounds and additionally increased the rewards so that everyone can Transcend much faster.   The valor cost of running 550 times will remain the same. So if you used 10,000 valor to run 4 times a day, now you only have to run 3 times.   ⭐Servant Shard - Rewards Increase We have received much feedback that it is hard to use the servant you desire due to difficulty in reaching the high-end Transcendence level. It is indeed much harder to transcend non-farmable servants.   So we have increased the servant shard reward to match the level of Purifying Grounds for all servants. The shard drop rate will increase as you get to further into the Sanctuary.   ⭐Fire/Forest/Dark Caesar Servant Balance The weakness to certain attacks will be removed from the passive.   ⭐Dark Ezebell Servant Balance The 2nd skill's effect will change from reduce DEF to reduce ATK and the combo skill effect will change from reduce ATK to reduce DEF. Also, the passive will be increased from remove 1 buff on all enemies to remove 2 buffs on all enemies.   ⭐Live Steam Suggestion The suggestion regarding the auto potential change feature and the increase in weekly decompose will be updated in the 5.5 update.   If we have any additional changes, we will notify everyone in the next dev note.   Thank you