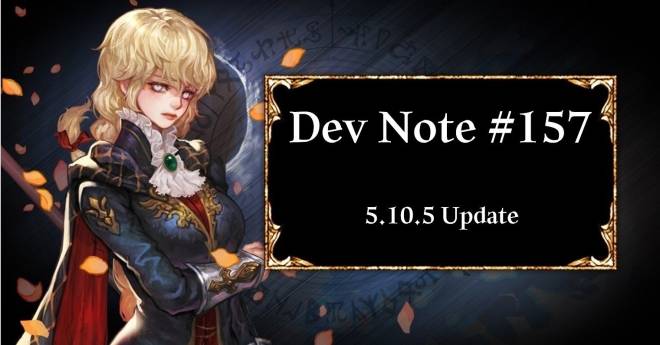 Greetings Heirs,   We want to share details regarding the August 24 update. A new Light/Dark Combine will be added while other Servants will undergo rebalancing.   [New Combine - Light Rem]   In the last week's "Guess Who Is Next?!" event, many of you have guessed the new combine for this update. Light Rem will be available from 8/24 to 9/26. Light Rem can be obtained one time by using Fire/Water/Forest Mabel or Light Enoch as materials.   Each Fire/Water/Forest Mabel will be obtainable through Rate+ or 4★ Combine. Based on your feedback regarding the difficulty in obtaining L/D 4★ Materials, we have updated Light Enoch to be combinable using L/D 3★ Servants.   Required 3★ servants are Light Rhamaan, Light Sirucus, Dark Ashimov, and Dark Nuamaan.   [Servant Rebalancing]   Eimyrja Buffed   As many of you have requested, Eimyrja will be buffed. Fire/Dark Healer Eimyrja will be buffed in this update, and the remaining Water/Forest/Light Eimyrja will be buffed during the ATK-based DPS Servant mass buffs.   Fire Eimyrja   It has been a while since we updated Fire Eimyrja; updates to her skill effects have been long overdue. Eimyrija's conditional Passive skills will e changed to heal allies' HP even upon Combo Skill use. Her 2nd Active Skill's HP Recovery increases from 70% to 100%, transforming her into a double healer.   Eimyrja's Passive will also be changed. Buff Removal originally belonged to her Combo Skill but will be changed to a Passive Skill. Also, will be able to change one buff on enemies into Heal Deprivation. Additionally, Debuff Removal for all allies will be added to her Combo Skill.   Buff Block for all enemies has been added to her 1st skill, bolstering her role as a versatile Healer Servant.   Dark Eimyrja   Dark Eimyrja was the first Servant with the Redemption effect, reviving all allies one time momentarily. However, this didn't prove to be worth enough to her, and she will be updated as follows: DEF Up for all allies will be added to her 1st Active skill, while Debuff Removal for all allies will be added to her Combo Skill.   The Redemption effect in the Passive Skill remains and casts a random debuff from the debuff list on all enemies. (Debuff list: ATK Down, Heal Deprivation, Buff Block) The debuff does not disappear for the duration.   As a double Healer, Dark Eimyrja will be revamped and capable of attacking enemies in various ways.   Yarane   To accommodate the change her Passive Skill's change to Glancing Hit, her Potentials have also been updated. In the Potentials [Special #4] list, Glancing Hit Rate Up has been removed and replaced with Shield Removal upon Combo Skill use.   As many Heirs have struggled with Yarane in PvE and requested a remake, we plan to update Yarane in the next update. There is also a new Avatar for a new Servant, so get ready for the next update!   And that wraps up the dev notes. Thank you!