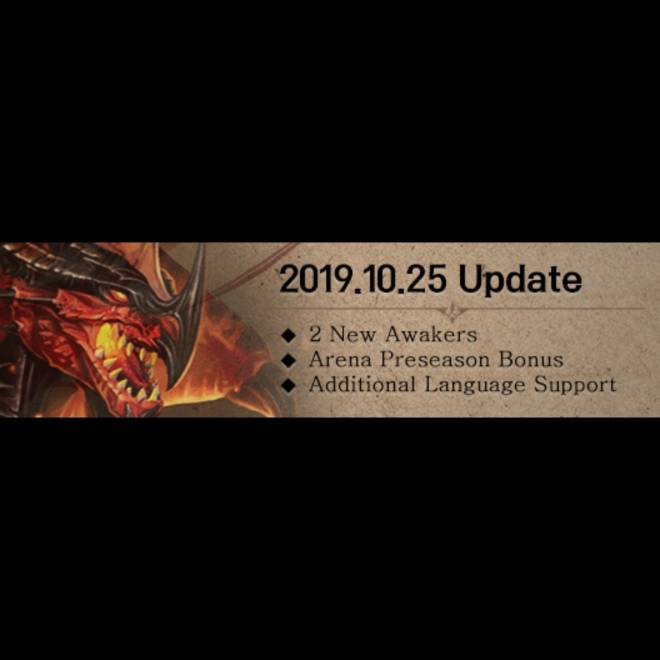 Good day, Heroes!   We have good news for you! Listen carefully as the goddess Solaniel delivers the word to you.   ⏱ Update Period: October 25 | 8:00 AM ~ 11:00 AM (UTC +0)   Please read all the details below:   ◼️ New Awakers have been added - Demones (Mage-type hero) - Gaia (Assault-type hero)   ◼️ Language Support - Added Simplified Chinese language - Added Thai language   ◼️ Shop - Added a new Open Period Shop Category where players can unlock the - Attribute Stone Dungeons using Exploration Tickets   ◼️ Seasonal Effects have been added to the Arena. -The effects of this season are as follows: - Assault-type units’ physical and magical defense will increase by 50% - Mage-type heroes’ magical attack will increase by 30% - This feature will be released again on a later date.   ◼️ Auto Skills and Quick Battles that were previously used in Adventure Dungeons are now exclusively available for Cleared Dungeons   ◼️ Reduced the difficulty in Field of Test   ◼️ The issue wherein players were unable to clear the Expedition Dungeon despite meeting or exceeding the Recommended Combat Power has been fixed.   ◼️ Reduced the EXP Crux Level from 40 to 30. - Fixed an issue wherein the EXP Crux was greater than the maximum level of a unit - We will continue to improve the quality of content and the performance of the game in future updates - After the update, previous EXP Crux values at level 40 will be now shown as level 30. Despite the changes in levels, the amount of experience points will remain the same. - The updated EXP Crux’s will provide the same experience points as level 30.   ◼️ Increased the Hero Equipment stats - Knight is now more devoted to protecting your units. - Increased Weapon damage by 70% - Increased Armor defense by 30% - Increased Shield defense by 500% - Despite the increase in Shield stats, Armors are still better to use in battles. - Increased Weapon Attack Damage by 100% for the Archer and Mage hero   ◼️ Increased the Hero Accessories stats   ◼️ Guild Members with 1-3 active members can now open the Guild War   ◼️ Kylon is buffed to Elite grade. His status is also buffed.