Along with the Gods Play-to-Earn will launch October 27th 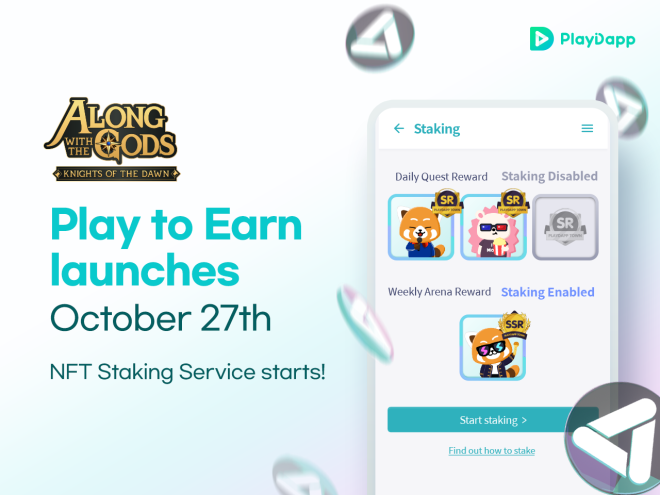 Along with the Gods #playtoearn server with $PLA rewards and #NFT staking will launch on the 27th of October!   Start Staking NFTs Now: https://market.matic.playdapp.com/p2e/guide   PlayDapp, a blockchain game project that drew attention after being listed on Coinbase, the largest virtual asset exchange in the U.S., is speeding up its attack on the global blockchain game market through the RPG Along with the Gods: Knights of the Dawn’s (Along with the Gods) Play to earn Model.   P2E games, which let players money while playing, are a new concept of game. This allows game users to earn profits through gameplay using blockchain technology. Blockchain game service platform ‘PlayDapp’ announced on the 20th of October that the opening date of the P2E server for the RPG ‘Along with the Gods’ will be October 27th and start the NFT pre-staking service immediately (excluding Korea and China). NFT staking refers to a service in the form of depositing NFTs for a certain period of time and receiving interest and rewards as rewards.   PlayDapp’s NFT staking is an essential process to participating in P2E games and was introduced to transparently distribute profits to users while preventing service-related interviewing issues and allowing participants to claim proper compensation. Users who have completed NFT pre-staking can immediately participate in the P2E-only server, which will open on the 27th, and receive daily and weekly compensation for participation.   Users who have staked 3 SR grade PlayDapp Town PLAYZ NTF will receive 5 PLA as a daily reward when completing daily missions. Users who have additionally staked +1 SSR level NFT can receive up to 5000 PLA (PLA) as a weekly ranking reward for participating in PVP (tournament).   The PlayDapp Town PLAYZ NTF required for staking can be obtained through synthesis or purchased on the Polygon version of the PlayDapp’s C2C marketplace PlayDapp.com.     [Social Media]   Facebook: https://www.facebook.com/groups/AlongWithTheGods/ Moot: https://moot.us/lounges/345/ Twitter: https://twitter.com/AWTG_PlayDapp Medium: https://medium.com/playdappgames Discord: https://discord.gg/5QMpnJ7 Telegram: https://t.me/cryptodozer_io