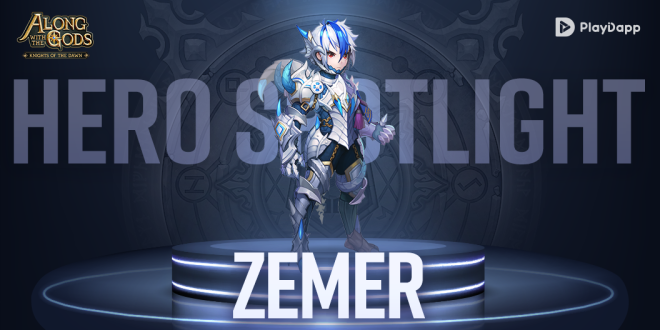 “I’ll be the protection of light”   We’re back with another Along with the Gods Hero Spotlight, featuring Zemer!   If you missed our previous edition on Floria you can read it here: https://moot.us/lounges/345/boards/1686/posts/4148111/hero-spotlight-floria Hero Spotlight: Floria | Along with the Gods: Knights of the Dawn   “Let’s plant this seed together. This is a seed that will change the world!”   Floria is the path finder for the Star Group. The elves of Turilleon treasure her warm-hearted personality and her adorable smile. Nobody is able to stay angry in front of her.   Floria is a natural 3-star Support-type ... moot.us

Zemer is a default 5-star Water Tank hero, and is right up there as one of the best Tanks in the game! What’s more, any player can obtain him for free through Hero Combination in the Temple of Heroes. Everyone should make it a priority to be able to fuse him if they haven’t already. He’s well worth the effort!   You’ll need Jenia, Evan, Misty and Rex as combination materials. Jenia and Evan can be attained through combination themselves while Misty can be obtained by purchasing her Light Shards from the Arena Shop with Team Arena medals. Rex will be the trickiest hero to obtain as you need to randomly summon him through scrolls or synthesis.

So, what makes Zemer so great?   Zemer is an all-rounder who can be used to great effect in both PvE and PvP. He’s a beast in the Arena and also does well in the various PvE modes such as Infinite Tower and Story. He’s also an effective hero to use in the Nhumer and Havoc Raids.

With great stats and an immense HP pool, Zemer is incredibly useful as a tank. He also has sky-high Physical Defence and his Skills augment this further. Opponents will have a hard time bringing Zemer down through physical attacks.   His skills are top-notch, providing an unbelievable amount of buffs and support to himself and the rest of his team. Zemer’s active skill deals 300% physical damage along with 10% of his Max HP as bonus damage, which ties in well with his overall tank build. His active also makes him completely invincible for 5 seconds. Powerful stuff.   His auto skill protects all allies with the dragon’s armor to increase the Physical Defense for 10 seconds and grant immunity against inability effects for 5 seconds, the former is a nice buff but the latter is a game-changer and a huge part of Zemer’s overall appeal. His passives provide a 15% chance of cleansing his allies whenever he takes a hit as well as a 20% boost to his own defenses. His overall kit is perfectly engineered to augment himself while also strengthening the rest of your team.

Zemer also has the option to boost his Inability Effect Resistance even further through Awakening, making him almost impervious to Inability Effects. He can further boost his HP with his Awakening I skill, and his Awakening IV skill can further boost his HP too. With fully leveled Awakenings he can receive up to an additional 40% to his HP. Other Awakening upgrades allow you to increase other important stats such as Attack Speed.   Zemer is a super flexible character when it comes to rune set-up. The standard PvP focused set-up of Philosopher and Warrior Runes works as well as ever, providing Zemer with a 50% boost to his Inability Effect Resistance as well as 10% more energy at the start of a battle. However, due to Zemer’s overall versatility, he can equip other types of runes effectively as well.   Some top players have been seen equipping him with Torrent runes and/or Recovery runes, letting him provide even more utility to the rest of the team by providing extra acquired energy or received recovery. Patience runes are also an option to beef up his lower Magic Defence stat. Some players even like to simplify things completely by equipping Life runes on him to boost his HP as much as possible. 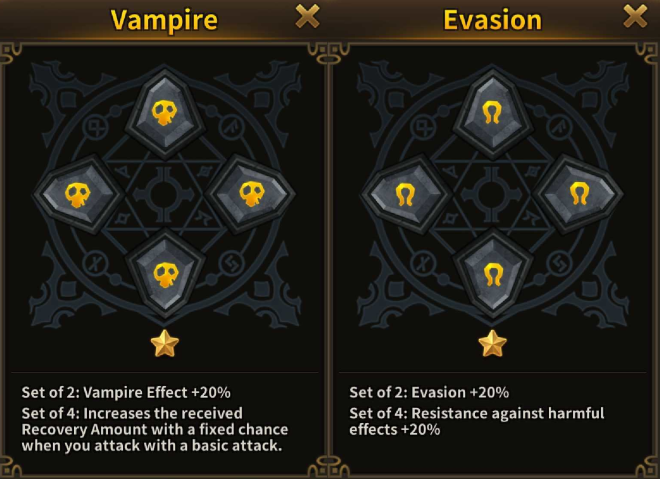 Another more exotic variation consists of combining Vampire runes with Evasion runes. This turns Zemer into an incredibly frustrating problem for your opponent. Alongside his natural bulk, his heightened evasion and HP recovery from attacks make him doubly hard to kill.   In general, you should keep Attack Speed and HP in mind as important rune sub-stats for Zemer when you build him. Zemer should be built to survive as long as possible in battle and sponge damage in the frontline while getting off as many skills as he can to help his team. Beyond that, Zemer can largely be molded to the needs of your team so feel free to customize him as you see fit.   Zemer is one of the game’s best Tanks and every player should make him part of their roster. Individually, he’s an incredibly durable hero, but he also provides an amazing array of benefits to your team as a whole with his buffs and shields. There are few better at leading your frontline.   Let us know your thoughts on Zemer and how you use him!   Team PlayDapp   Social Media   Facebook: https://www.facebook.com/groups/AlongWithTheGods/   Moot: https://moot.us/lounges/345/   Twitter: https://twitter.com/AWTG_PlayDapp   Medium: https://medium.com/dozerfriends   Discord: https://discord.gg/5QMpnJ7   Telegram: https://t.me/cryptodozer_io   Reddit: https://www.reddit.com/user/playdapp_io