“Get ready to greet fortune.” 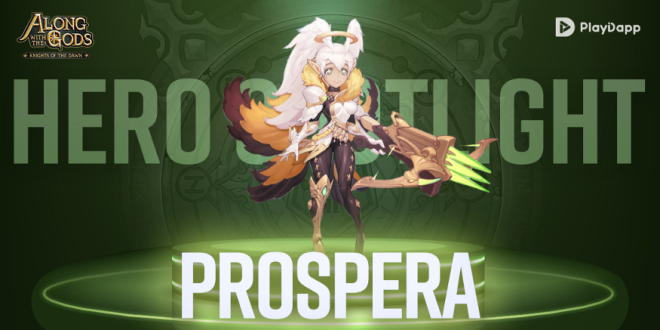 One of the Ancient Goddesses in charge of “Luck”. She resides in the Tree of Life that protects the Forest of Fairies while predicting the future. The fairies are protecting her as a group.   We’re back with another Along with the Gods Hero Spotlight, featuring Prospera!

Prospera is an Ancient Goddess Hero and natural 5-star Earth Hero. She’s one of the most powerful and important figures within Along with the Gods. She’s a staple in high-level PvP and end-game PvE. With her powerful abilities and arguably the game’s best Leader Skill, she’s one of the most fundamentally important Heroes you can add to your collection! Read on to find out how to obtain Prospera, customize her and get the most out of her!   [How to Obtain Prospera]   Prospera can be obtained via the following Hero Summon Scrolls: Earth Hero Summon Scroll, Premium Hero Scroll, Legendary Hero Scroll, Mythical Hero Scroll and Ancient God Hero Scroll.   Your best odds of getting Prospera are through the Ancient God Hero Scroll. You can obtain an Ancient God Hero Scroll by clearing every stage of Scenario on Hell difficulty or completing seven rounds of Hero summoning Mileage at the Temple of Heroes. Prospera can also be randomly obtained through Hero Synthesis using three 5-star Heroes as Synthesis materials.   Prospera currently doesn’t have any alternative methods of obtaining her without a Hero Summon Scroll or Synthesis, unlike other Ancient God Heroes such as Styx and Alexis, so you’ll need to have some patience and invoke the Goddess herself for the necessary luck to obtain her.   [Prospera Skills Breakdown]   Prospera has a good variety of Skills and Passives that make her a complete team pillar. She has hard-hitting attack Skills with powerful effects, incredibly useful team stat buffs and passives which greatly increase her own resilience and defensive capabilities and one of the absolute best Leader Skills in the entire game, Rune Armor, which increases the HP of the entire backline by 50%.

Unlucky shoots arrows at three enemies to inflict 330% physical damage with 5% of the enemies’ Max HP as bonus damage and inflicts Entice, which makes enemies attack their own allies, for four seconds with a 100% chance.

Prepared Fortune renders Prospera invincible, nullifying all damage, for five seconds when she receives damage that exceeds 20% of her Max HP. This is an incredibly useful Skill especially in PvP where activating Prepared Fortune can turn the tide of a battle completely.

Adrenalin bestows and increases Prospera’s Vampire Effect to 20%, essentially giving her a free set of Vampire Runes without having to equip Vampire Runes. This is a very powerful ability which greatly enhances Prospera’s value while also offering flexibility to her build.   [Prospera Runes]   Prospera has similar recommended Runes to other Ranged Heroes such as Lin. While there are certain Rune types that are considered optimal, you will have some flexibility among these Runes to adapt to your preferences and needs. Prospera’s overall utility in battle comes from being a powerful DPS unit with great debuffs and team buffs, with several self-sustain boosting Passives and Skills.   Prospera’s unique Skills should also be taken into consideration when choosing Runes and the sub-stats, such as her ability to boost Critical Hit and Critical Damage rate and her Adrenalin Skill which grants 20% Vampire Effect. For instance, you may choose to go all in on boosting Prospera’s Vampire Effect by equipping her with a set of two Vampire Runes or you could look to boost Critical damage to capitalize on Prospera’s guaranteed Critical Hit on her active Skill and Blessing of Hope Skill.   Warrior, Philosopher, Evasion and Vampire Runes head the list of viable Runes for Prospera and you won’t go wrong with any combination of these.

Warrior Runes are a solid choice on any hero, increasing their Inability Effect Resistance by 50% and many PvE opponents are capable of inflicting an array of devastating Inability Effects.

Philosopher Runes are considered the best overall Rune type in the game as a set of two provides the wielder with a 10% boost to the team’s Energy, which can make a huge difference, especially in PvP.

With the use of Evasion Runes, Prospera can become an elusive Hero who’s difficult to put down, especially combined with her Prepared Fortune Skill.

Vampire Runes grant the wielder 20% Vampire Effect which returns some of the damage dealt as recovered HP. This synergizes very nicely with her inherent Vampire Effect ability.   [Prospera Awakenings]

Awakening II: Bleed/ Evasion This Awakening has an element of personal choice as some players prefer to choose Evasion boosting over the Bleed effect, particularly if they don’t use Evasion runes on Prospera to improve her survivability. However, the Bleed effect makes Prospera even edgier in DPS against Raid bosses and maximizes her offensive potential.

Awakening III: Attack Speed Increasing Prospera’s Attack Speed with this Awakening slot is a given since you want to be able to attack as quickly and as often as possible, which is especially important for Prospera as she has several helpful abilities which are contingent on initiating attacks.

Awakening V: Team Attack Speed Increasing your team’s own Attack Speed is the preferred option as it provides the greatest overall benefit to your team and will vastly improve your team’s offensive capabilities. This also synergizes well with her Blessing of Hope ability and provides a massive combined 40% Attack Speed boost to the entire team when active.   [Prospera Accessories]

Prospera should use similar accessories to Ranged Heroes like Lin and Lizzy. The optimal accessories for Prospera are Demon or Immortal accessories. However these are high-level endgame items that the majority of players realistically won’t have access to. Fortunately however, Lua accessories are the next best thing for Attack based Heroes and they’re highly accessible for the average player. You can also utilize HP boosting Accessories to increase Prospera’s longevity in battle if that’s your emphasis in building her.   The main sub-stats you should be looking to increase with your equipped accessories for Prospera are Attack, Attack Speed, Critical Rate/Damage, Evasion and Accuracy.   [How to Use Prospera]

Propsera is one of the most universally useful Heroes in Along with the Gods and can be used in a variety of game modes to great effect. Her Leader Skill which increases every backline member’s health by 50% is an absolute game-changer and can be vital in clearing certain content in the game, especially tough PvE content such as Hell difficulty stages in Scenario and Infinite Tower and Ancient Drake Raids where enemies can deal huge amounts of damage and Prospera’s Leader Skill can make or break your chances and allow otherwise incapable teams to push through.

Propsera is especially useful in Raids against Kraken, Python, Pantahras while also being viable in the Havok and Nhumer Raids due to her Leader Skills and overall team support.   Many highly-ranked Arena players place Prospera within their backline and use her Leader Skill to beef up their team’s defensive capabilities, which allows powerful but frail Magic Heroes such as Oliver, Patricia and Alexis to thrive. Prospera is a true Swiss Army knife of a Hero. Given this, you can adjust your set-up to fit your preferences and needs.   Prospera’s Skills also provide a great deal of support and buffs to her teammates. Her abilities can support a wide range team composition styles and Heroes with universally useful effects such as raising Attack Speed and increasing the enemies’ cooldown timer but there are certain Heroes who do especially well working with Prospera.   With her ability to boost Critical Rate and Critical Damage, Heroes such as Lin, whose Passive increases her Critical Damage by 40%, and Zenon, who inflicts Stun with each Critical Hit, who have Skills that benefit from Critical buffs are boosted tremendously by Prospera’s presence.   On the other side, allies who have Skills that stack with Prospera’s are also a good bet, such as Melvin who boosts Critical rate and Heroes such as Styx, who can stack their cooldown timer debuffs with Prospera on enemies.   Look for combinations like these when you put together your teams with Prospera, she’s an incredibly versatile Hero you can rely on in any situation.   [Conclusion]   Prospera is undoubtedly one of the top PvE and PvP Heroes in Along with the Gods. Her utility in literally every in-game situation through her Leader Skill and powerful Skills make her one of the best all-round Heroes in the game. Prospera can be a literal game-changer for you and any player lucky enough to obtain her should immediately focus on upgrading and utilizing her.   Let us know what you think of Prospera and how you use her!   Bringing you the future of gaming today, Team PlayDapp   [Social Media]   Facebook: https://www.facebook.com/groups/AlongWithTheGods/ Moot: https://moot.us/lounges/345/ Twitter: https://twitter.com/AWTG_PlayDapp Medium: https://medium.com/dozerfriends Discord: https://discord.gg/5QMpnJ7 Telegram: https://t.me/cryptodozer_io Reddit: https://www.reddit.com/user/playdapp_io