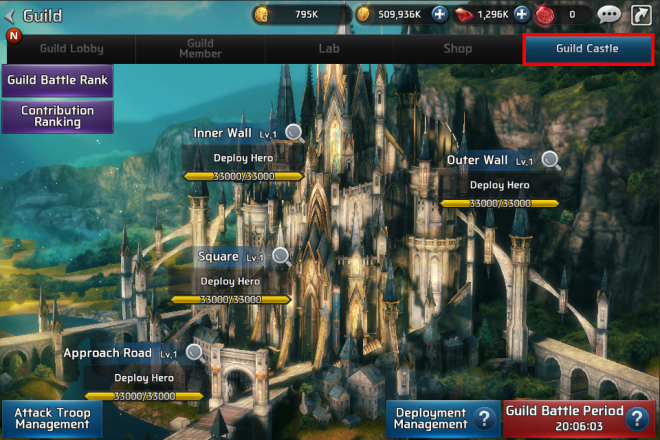 Select the top guild castle menu, you can see the menu of the guild owned castle. 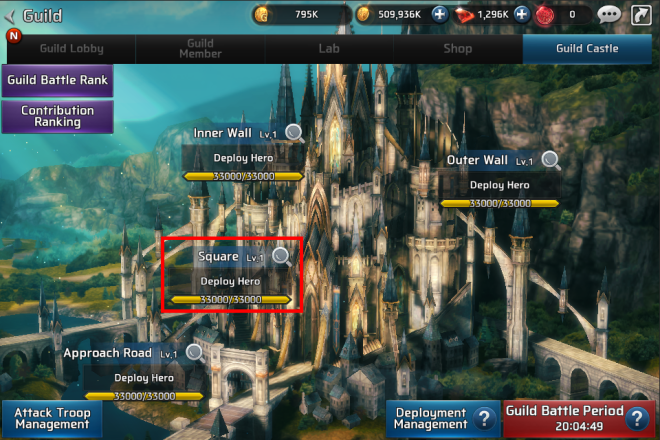 The guild castle consists of Approach Road, Square, Inner Wall, Outer Wall. Each gateway requires a hero's for defensive. When you touch the gate, you can place your defense troops. The defensive power placement strategy at the barrier must be a guild master or authorized. General guild members are not authorized to deploy. 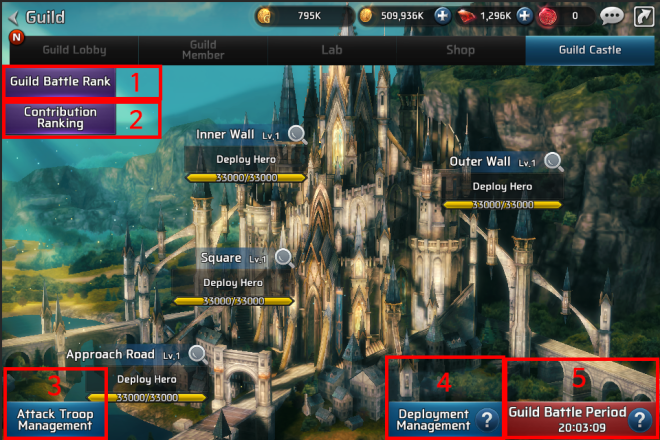 1. You can check your guild ranking. Try to be the best guild in the world! 2. You can check the battle contribution of guild members who participated in guild battles. For the guild! 3. You can set up your own guild units to attack your opponent's guild. Although it varies depending on the situation, it is basically an interpersonal battle, so it is the same unit as the duel. 4. Send troop management is a menu to send troops to defend the guild. (Supplementary explanation below) 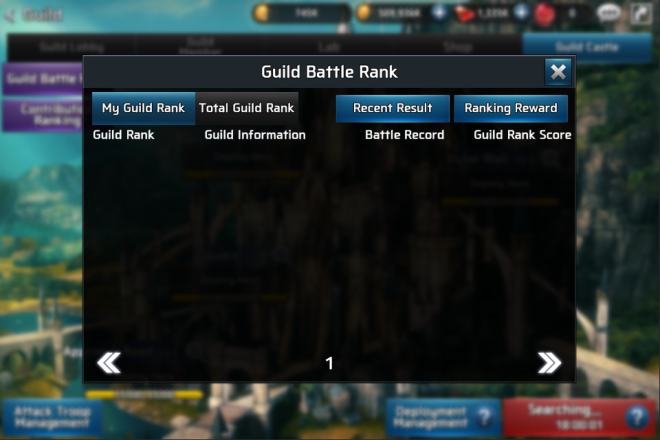 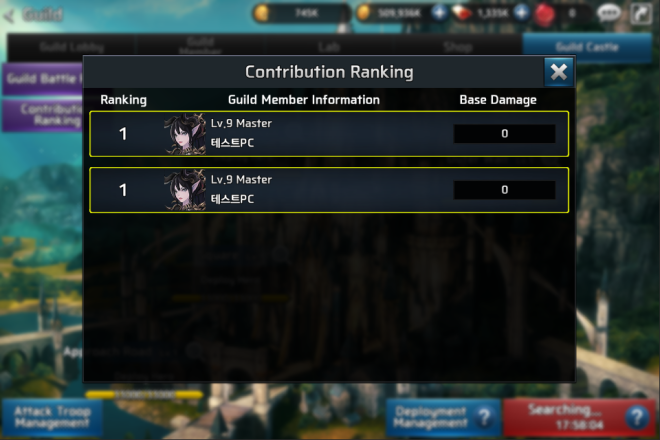 This is a screen for checking the contribution of guild members to the guild battle.   2. Send troops(Global, Korea) Sending troops is a guild member's predecessor action for the guild war. If no guild member sends troops, you can't make a defensive unit. Guild battles cannot be won. Sending troops can be a bit difficult with Ceres's unique system. 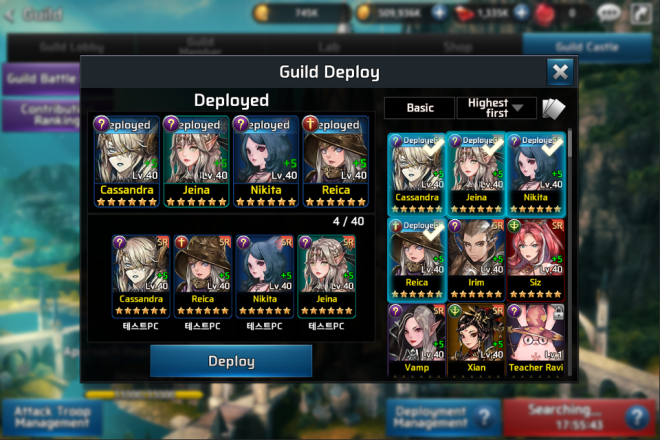 You can send 4 heroes to a guild per guild member. Heroes cannot be used while sending troops. Only defensive units in guild battles can be used. There are at least 20 heroes because there are 5 defensive units at 4 barriers. Therefore, guild members should send at least 20 heroes. Send a powerfully raised hero to lead your guild to victory!     3. Guild warehouse(Global, Korea)   A guild warehouse is a warehouse that can hold guild goods. You can send the goods to the hero who will provide strategic assistance in the guild. Guild warehouses can only be used by guild masters or authorized heroes. (The ability to store in the warehouse is all available.) 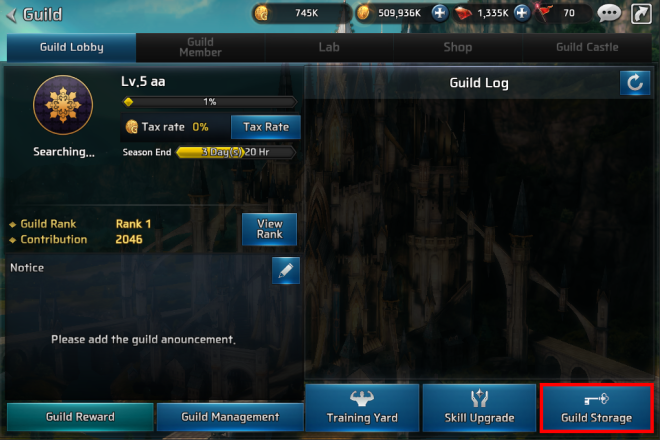 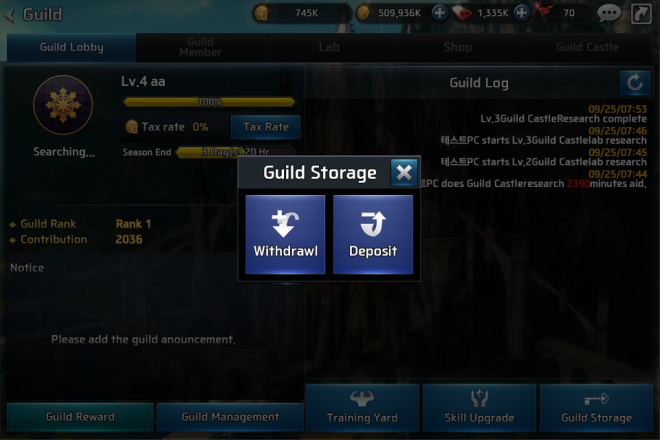 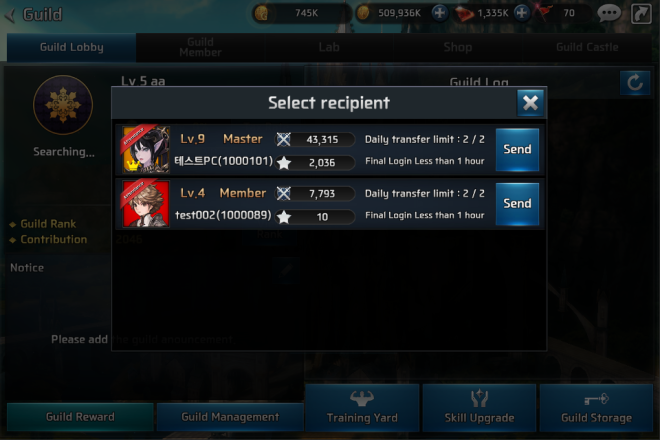 This is a screen for selecting guild members that send goods and items in the guild warehouse. 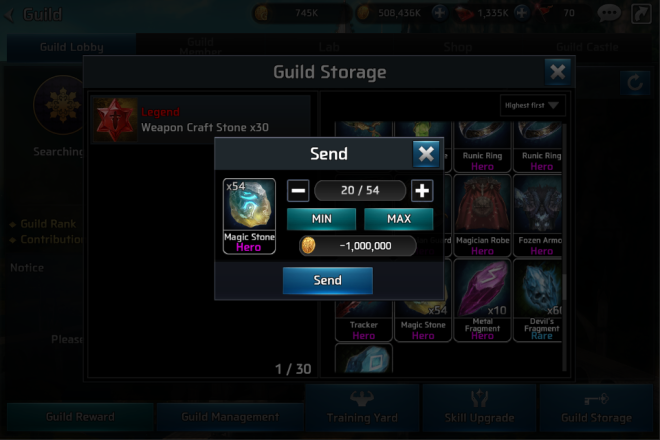 It is a screen to leave items and goods to the guild warehouse.   ※ Some content prior to the update is subject to change, and changes and additions will be announced through this public notice.   Please refer to the updated information of Ceres M. Additional updates will be posted in the relevant notice.   Thank you.