Here's a plot of the pull distribution from simulation

EDIT: Switched to a cumulative histogram, as I think that's easier to interpret for most people. x-axis is how many gems used, and y-axis is the percentage of people who would get the limited character if they decided to use a certain number of gems. For example, we can see that 60% of people would get the limited banner child with roughly 25k crystals.   So instead of just throwing numbers out, I decided to make a plot to share. It represents if you decide to pull for a limited child, how many gems it may take for you to get them.   I did 1 million trials to see, and results actually surprised me. I thought there was gonna be a peak in the middle at around 27000 gems (Gaussian distribution), but it turns out that a good number of people will get it very early on.   The problem is the tail end. One of my trials took 468,990 gems to get, which I could image would make anyone quit...   Overall the average number is 27000 gems, which is expected.   Anyways here's the plot for those interested. 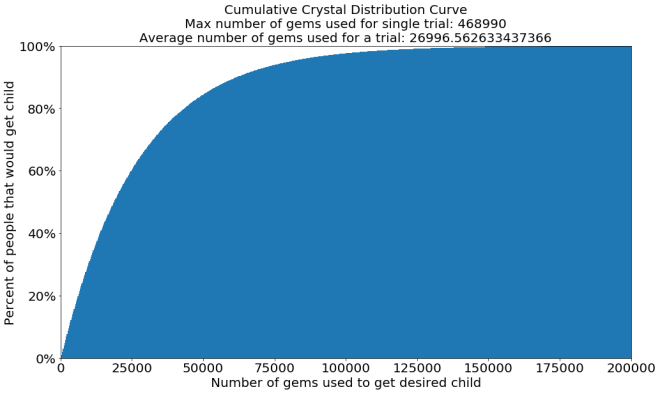