I haven't spent a dime on the game since ignition was introduced to global, before that I'd regularly buy stuff for that extra edge, but after 7 grand I decided that'll be enough of that nonsense. Until now. As I was expecting my luck with Lupin sucks, only 1 copy from summoning. I blew away all my 5☆ units in HoR, blood gems are gone. Her exclusive banner is also gone. My average this wb is 11-14 million while my highest was 19M. I've been among some of the strongest at one point, but as the bosses get stronger and my units are more difficult to complete, the game for me has become a bit of a drag. Lupin is an important unit and in all honesty I'm tired of my DC sucking everyday so maybe I'll buy some copies starting here.

For $180 I can have 2 copies for Lupin+2 As you know it's going to come with a bunch of tickets and bloodgems so it'll be wise to use them all up before moving to the shop to spend another stupid amount of money for Lupin.

I still have to earn the rest of the shit i feel i paid for, by spending hundreds more, don't worry I'll probably be unlucky.

The 10x weren't special and I got Medusa, Mircalla and Banshee from the 3 dark 5☆ tickets. I'm at 120 bloodgems time to lay waste to them before going to the shop. Lupin in 3rd place ok

4☆ HoR. I use 33 bloodgems at a time. Milage is high so I'll get one of those units this session but really it's Lupin or nothing.

First try. I got a damn Lupin

Fail. Milage maxed out though. And I get....

I'll put a lock on that until I need her. Round 3

Not enough bloodgems to do another at 27% I'll wait till I get 6 bloodgems from the next 6 dead bosses. At +3 now

I'll need 1 more copy before I can scratch more tickets. I'll try my luck with the cheap 2700 crystal package

The last summon got my hopes up but it's just Jupiter. I'm going to waste more money.

Start cheaper. This will mean I can scratch more tickets. $236 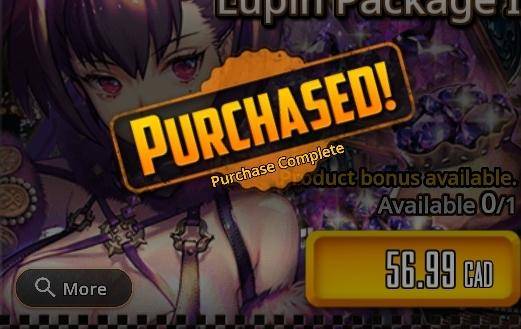 It also came with this box I better use. 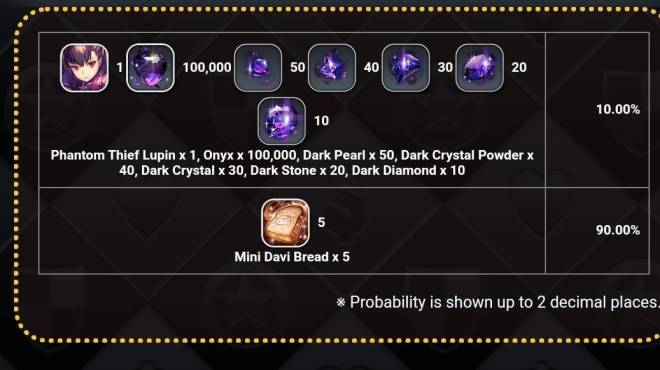 As for the box, i got mini davi bread. Time to scratch tickets again.

Nothing. The 5☆ was a single this time and it was 2 sided Moa. Next purchase will cost $114 but there's this other mission with more tickets I should use up first.

Time passed me by. I can still use practice mode to see how Lupin will perform now anyway. I'll stop wasting money for now since anything can happen at this point. If I manage to get the last 2 copies of Lupin from HoR or summon banner, then I'll save $230 not including those crystals I'll probably pick up for another $230, which is fucked up and why this game is cancer and once again the illness is mine. I'm pretty sure they laugh everytime someone calls them generous. EDIT: It's the next day, WB is over and I still need 2 copies of Lupin. But I got lucky enough

It's not to say getting the crystal pack was the smarter thing to do, it just turned out well. I could have easily been stuck buying the 2 copies of Lupin in the shop for a lot more after buying this. 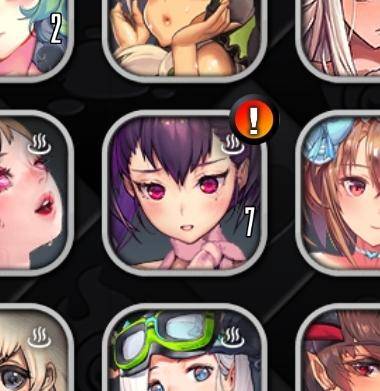 She'll get the spa treatment in a minute. My WB was real shitty this time. Best damage was 24 million. I never really cared about that tbh, I just needed this unit. Still I think it's about time I unleash my ignition cores for WB units. It's still a drag growing weaker with every WB and raid. I just don't want to ignite a unit only so a new unit can power creep on it and I'm stuck with an unusable ignited unit. One day I'm going to give away my account probably to one of you, though I like this game a great deal it's surely a bad habit and the dumbest thing I've invested in due to it's ridiculously high prices. Hope you enjoyed this presentation, and as usual, my haters, you know what to do.