Hey fellow candidates and DC community. Just wanted to mention or make note of anybody who is partaking in the event. Many of the posts and photos were nice, some were very funny. Which leads me to why I am making this post to kind of give a heads up. So... I'm not the Devs nor do I know how they decide, rule out or what is acceptable and such. The event details say post a car model that suits the Child. They mention and note the use of "Car" quite a few times in event details. I'm not trying to be an ass or implying sarcasm but... a "bicycle" and a "tank" (there are some others with non car photos) is not a car. ( I get it, I was laughing so hard at many of them thinking they were great photos ). But that is also why I'm doing this primarily to look out for those who did post those with not all "car" photo match ups. Like I said, I am not the devs nor decide the rules. But if your post didnt get accepted and you did not get the reward based off of "technically" not a car model which would not be following the details for event, that would really suck. 60K rebirth coins is a very nice reward, I'd hate to see or hear anyone lose that because of a simple technicality and by the time you would find out, it would be too late.   In my opinion, I'd keep and show the photos you did do because many of them are great and funny, however, I would do another and show in same post with another photo with actually 4 cars, 1 for each Child.   I dont know exactly but I'm sure what the Devs had in mind for this event they are doing for us, its in reference to the whole D1 racing in DC story. Sorry if I am being too picky or technical, maybe the devs will accept non car photos but I don't know nor did they say what is acceptable. They did not say "vehicles" "modes of transportation" or "something".   This is just for anyone who did the event and wants the reward, just giving my opinion and trying to help out. 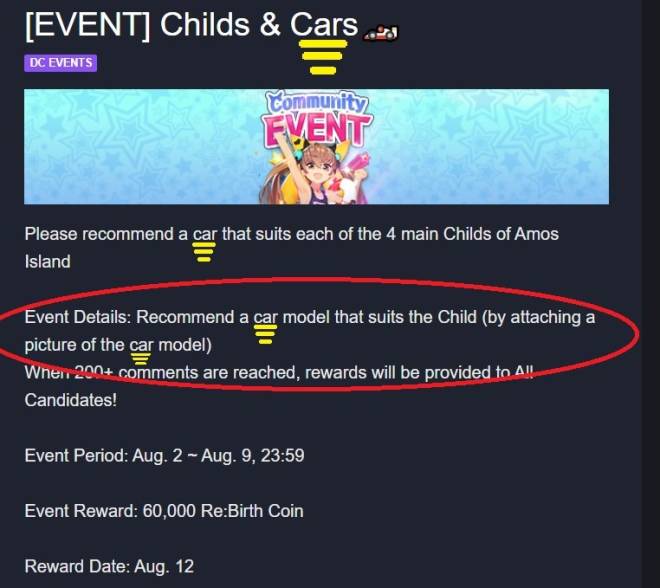