Hardly have any crystals and real money cause you're rolling for up to 5 DOA characters, so you don't prioritize getting this carta ? You're not missing much. So you buy this for $60 Canadian/what have you, and it goes to your mailbox with 25 five☆ galaxy cards like so.

In the above image we see why I had to sell off some of the very gear I would've used to enhance the card. Some of it was handed to units while the rest was purged until I had enough space. ( purged the lowest grades lowest star items) If/when you get this card and you spend the 6 million or so gold to max it out, and in my case summon some equipment after the equipment purge. You're still rubbing your goatee ( If you're a man with balls of steel like me )

After the lousey experience. The first thing you'll probably do is give it to a speed attacker and put them on the front line of WB, and as expected you'll notice the following.. - Your attacker's ATK has been nerfed. Then the special option takes what ATK you have left and increases it 22% in this case. Sadness manifest. - Pantheon, Mona, and Chang'e, will ignore our subject - In the front line our subject may/will get stunned. - No crit buff, no speed buffs. ^ That was for Siren and Abaddon. Giving this carta to maxed out Ayane can put her ontop of the ATK list, but then... So can many other ATK/CRT cards and even make her stronger. But you don't want your attackers to get poisond and stunned ? That's fine keep them in the back row. There's 0 benefit the HP/DEF this card offers while made for an attacker in WB. Some of you might have noticed that guy Adrenaline has 2 attackers in the front line. I bring him up cause he's always a shinning example of what a WB party should be. 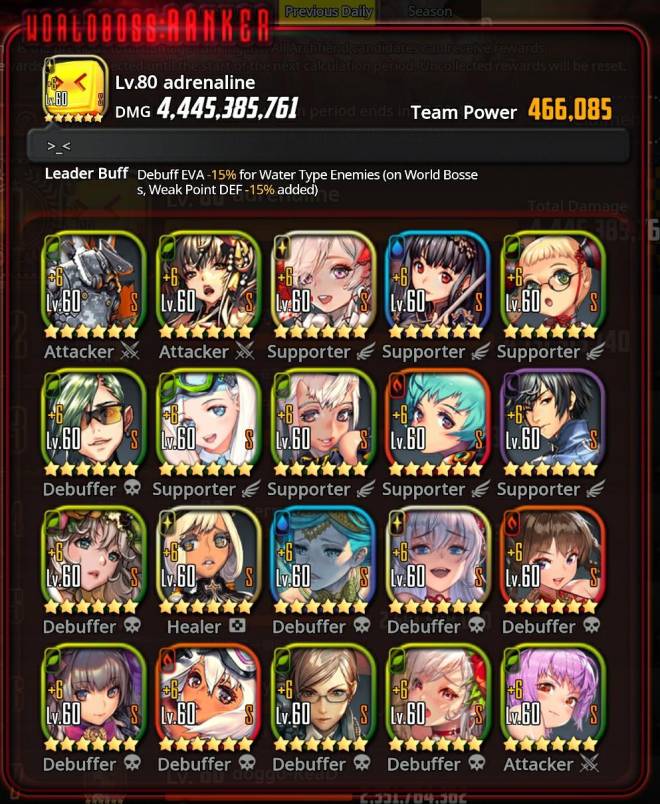 I have little clues as to why a hotshot would put them ontop where they are prone to getting stunned and cancelled out for fever. Being first to charge after 2 fevertimes isn't worth the trade off. That being said him having those attackers up there doesn't mean he's nerfing them into weaklings with this carta. I do agree with using Hermes for Siren and Abaddon. ( I'm still 50% unsure of that guy tbh. It could be Jong Un or Putin playing on that account )

My personal opinion is this card, it's sexy trash. The Japanese version offers ATK/CRT making it reusable for future water WB, while this global version, we could emulate it with weaker gear. I sometimes take away Ayane's weapon and accessory when I want her to be 3rd highest ATK with leverage, so Sytry doesn't put Ayane back on top. Could have been done without this card. I noticed I can buy 4 more of these beauties in the shop LOL. If anyone knows of a good use case for this card please enlighten us. All I see is a WB card that works in the boss's favor. Also. I'll like to give a shot out to my haters. You know who you are. What's good !? 💥