The Full-Scale Bloody Battle! 《Endless Duel》 added! The New «Endless Duel» is added to the Night World.   《Endless Duel》 is a new PvP content hosted by 'Natalis', an angelic demon who is dissatisfied with the existing 'Devil Rumble' operation method. Candidates can now enjoy various strategic play depending on the combination of the Child's skills and placement. 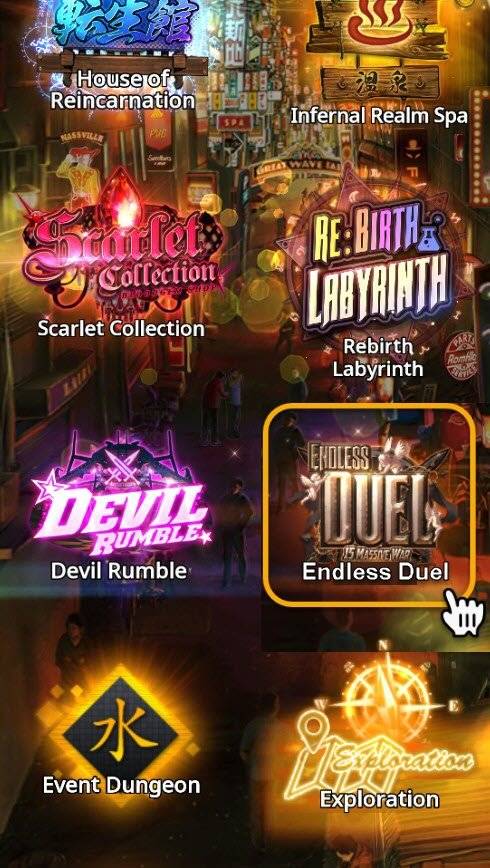 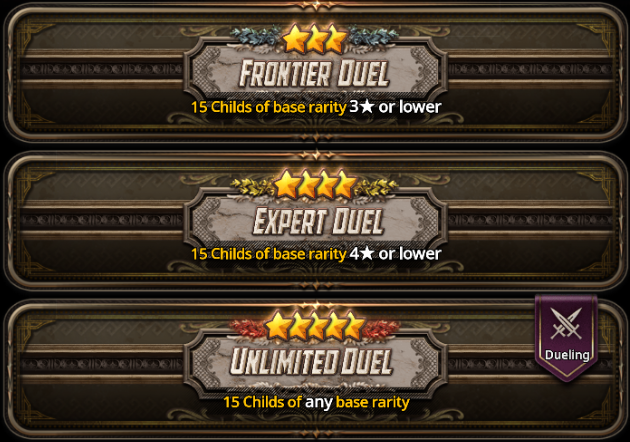 ★ 《Endless Duel》 Overview A party of 15 Childs is required to participate in the Endless Duel. Leagues may be limited depending on the Child's base rarity.

※ Candidates can participate in all leagues, including as Frontier Duel, Expert Duel, and Unlimited Duel. They may receive rewards according their ranks and offense history after the calculation process. ※ In order to enter the Endless Duel, Candidates must be at least level 18.   ★ 《Endless Duel》 Menu Intro Endless Duel has the following menus. 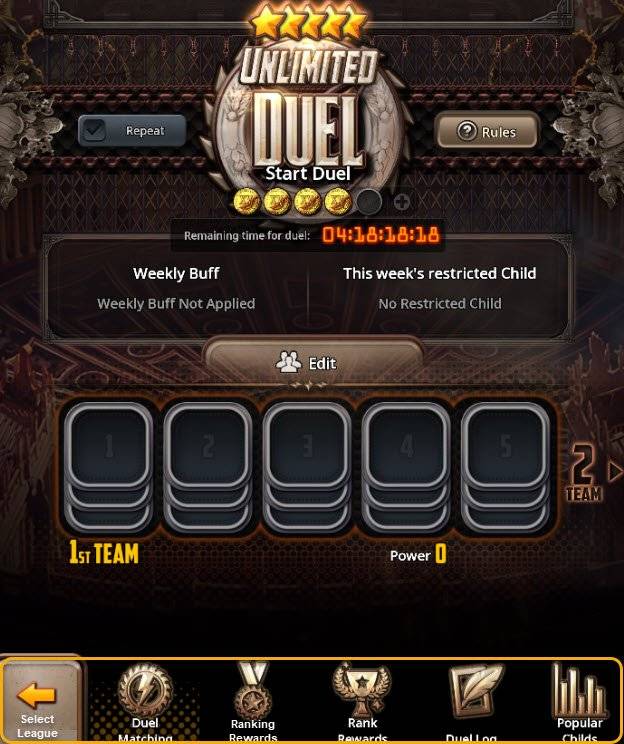 * Select League : Select a duel league between Frontier/Expert/Unlimited. * Duel Matching : Organize a party to participate in the selected Duel League. After editing the party, participate in Duel by touching “Start Duel” in the center of the screen. * Ranking : Check the list of rankers in the selected Duel League, it will be updated at regular intervals. * Rank Rewards : Check the weekly rewards according to the ranks in the selected Duel League. * Duel Log : Check the offense or defense history and scores up to the last 20 matches. * Popular Childs : Check the info of popular Childs frequently used in Endless Duel.   ★ 《Endless Duel》 Party Edit - To participate in 《Endless Duel》, a party of 15 Childs is required. One party consists of 3 lines, 5 Childs per line. - If a Child in the 1st line dies , the Child in the same position in the 2nd line automatically joins the battle. ※ If all the Childs in the same position in the other line are fainted, no additional participation will take place. Example 1) When Ophois dies in the party below, Enchant Semele automatically participates in the battle Example 2) If Ophois/Enchant Semele/Charlotte dies in the party below, the battle proceeds without additional participation in that location. 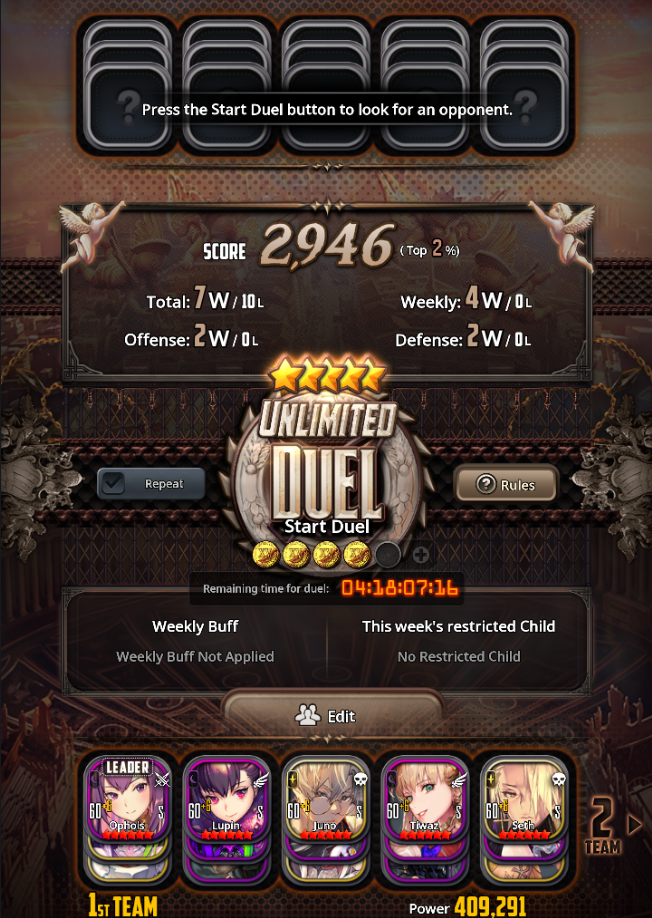 - Tokens are required to join 《Endless Duel》. - 《Endless Duel》 tokens are charged every day at 04:00 am (UTC +0), no more than 5 tokens are charged at a time. ※ If you played in the 《Endless Duel》 once the day before to have 4 remaining tokens, only 1 extra will be charged. ※ There are separate types of token used for each Duel League and they are managed individually. ※ Tokens can be recharged up to 2 times a day per league. ( 50 crystals per charge )

★ 《Endless Duel》 Battle When a battle starts, a random rival is matched based on the score, and the battle proceeds automatically without user intervention.   - The battle time limit is 6 minutes, and the battle speed can be selected at x1, x2, and x3 times. * The default battle speed for 《Endless Duel》 is x2. - The basic victory condition is of the opposing faction. - If there is no by the end of the time limit , victory or defeat is determined under the following conditions . (1) When the number of surviving Childs is larger (2) If the number of surviving Childs is the same, when the remaining HP is larger (3) If the number of surviving Childs and remaining HP are the same, when the amount of damage inflicted is larger ※ You can check detailed battle statistics and contents in the Duel Log menu.   The defense party is automatically registered as the the first match party or the most recent winning offense party.   - If you win in the first entry, defense will automatically proceed with the setting of the Childs who won most recently - In Endless Duel, when a user attempts an offense by pressing the 'Start Duel' button, the following results are reflected in the 'Defense' as well, so automatic matching/progress will be conducted even when not connected to the game.   - In the case of Defense Records, it is calculated at a certain set time, so there may be a slight time difference from the information you see in the game. ※ This is a matter related to record notation, and actual game points, and other details will be calculated and reflected according to the actual play.   ★ 《Endless Duel》 Battle Screen 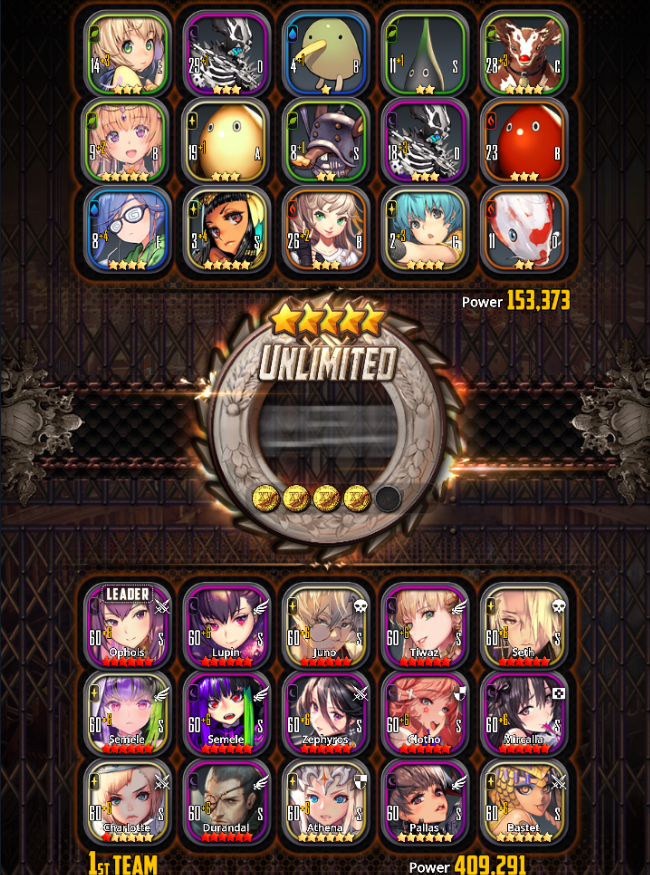 ↑ When the battle begins, all that's left is to trust and watch the Childs... ！ 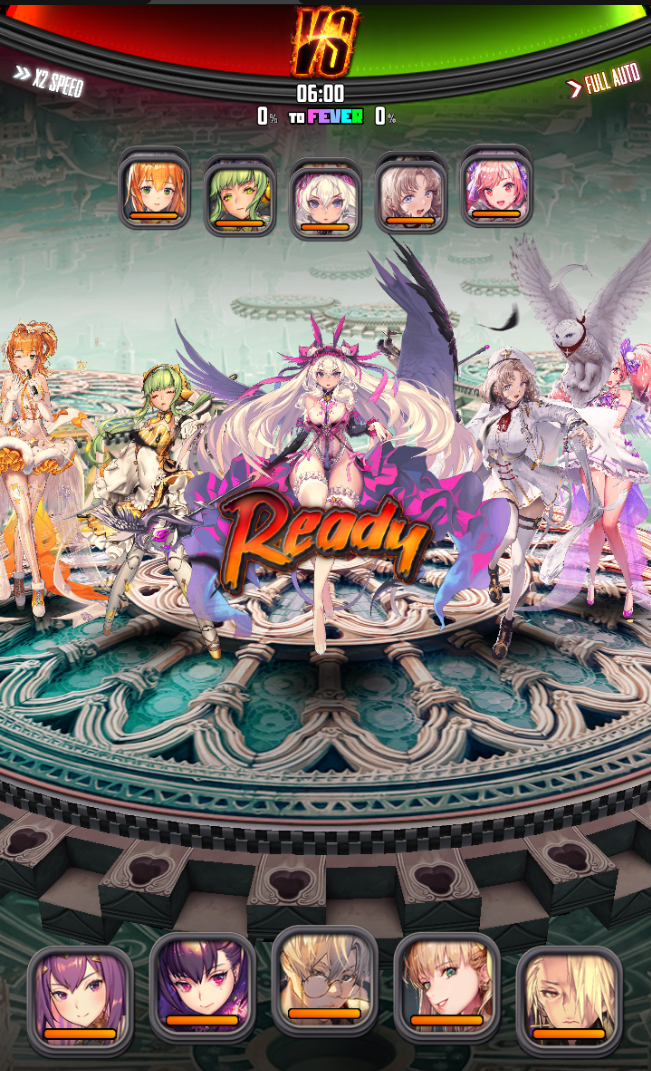 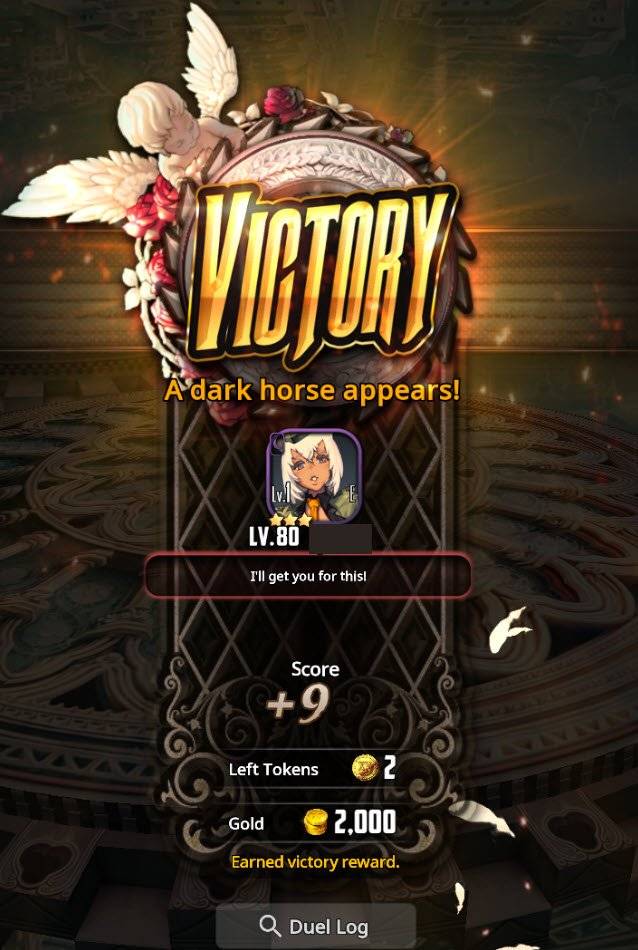 - In 《Endless Duel》, the scores decrease when defeated and increase when winning. - If the offense wins, gold is randomly given as a victory reward. The scores earned in this way are reflected in the ranking. However, gold is not paid as a defense victory reward. 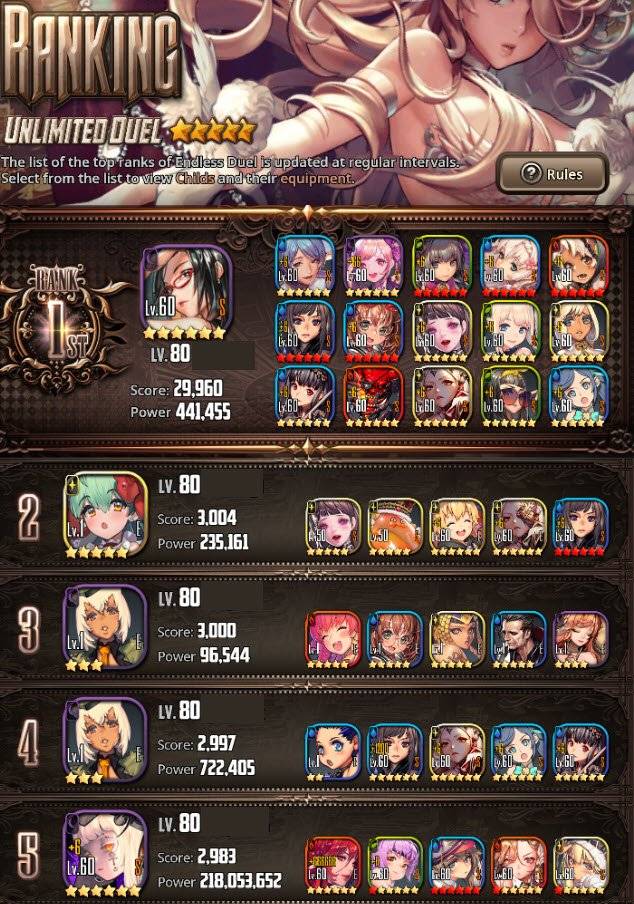 - The victory scores from the participated battles are updated at regular intervals. During the update, not only the offense record but also the defense record against which other candidates challenged you will be reflected in the score. - The ranking rules are as follows. 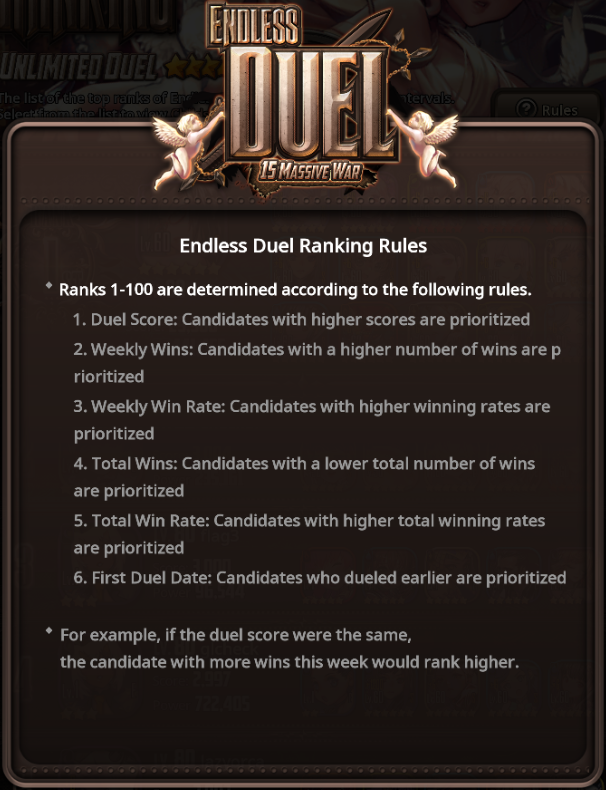 ※ For each league, different types of crafting stones, crafting tools, suspicious ores, and equipment (summon tickets) are provided in rotation. ( ex - Frontier Duel Week 1 : Weapon -> Week 2 : Armor -> Week 3 : Accessory -> Week 4 : Weapon )   Other TIPs 《Endless Duel》 Check out popular Childs before joining the battle - You can check the popularity ranking by job of the Childs from the list of the most used Child who participated duels last week. 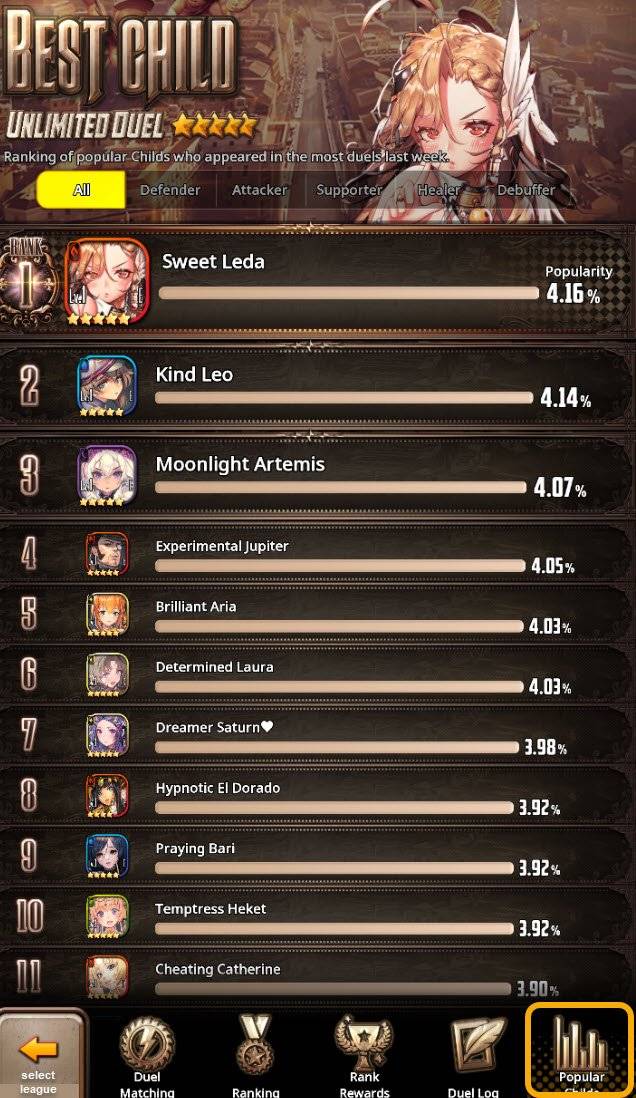 Prepare for the next battle by checking the battle details of the duels you participated in through 《Duel Log》. - In the detailed log, you can check the Child placement/damage given/damage taken/battle log of you and your opponent! 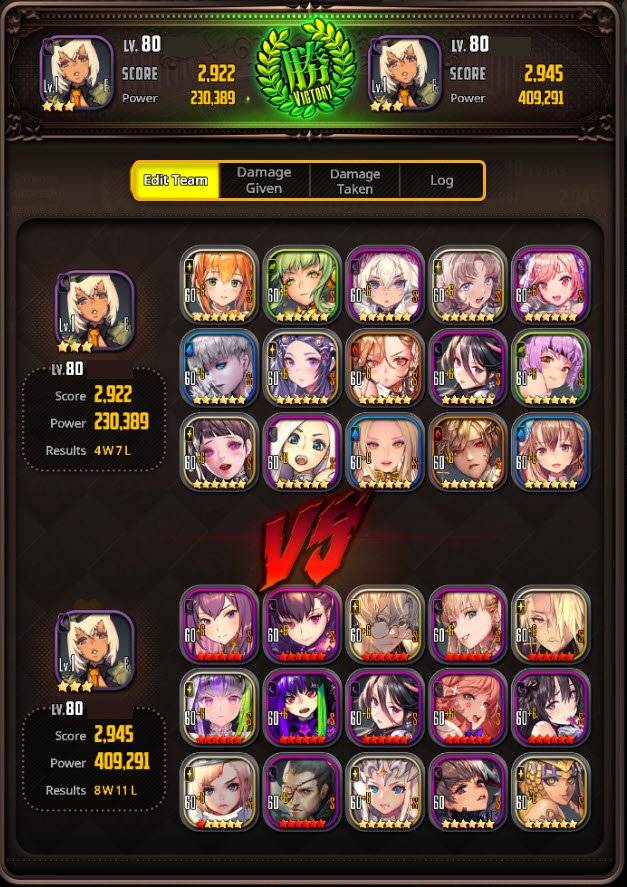