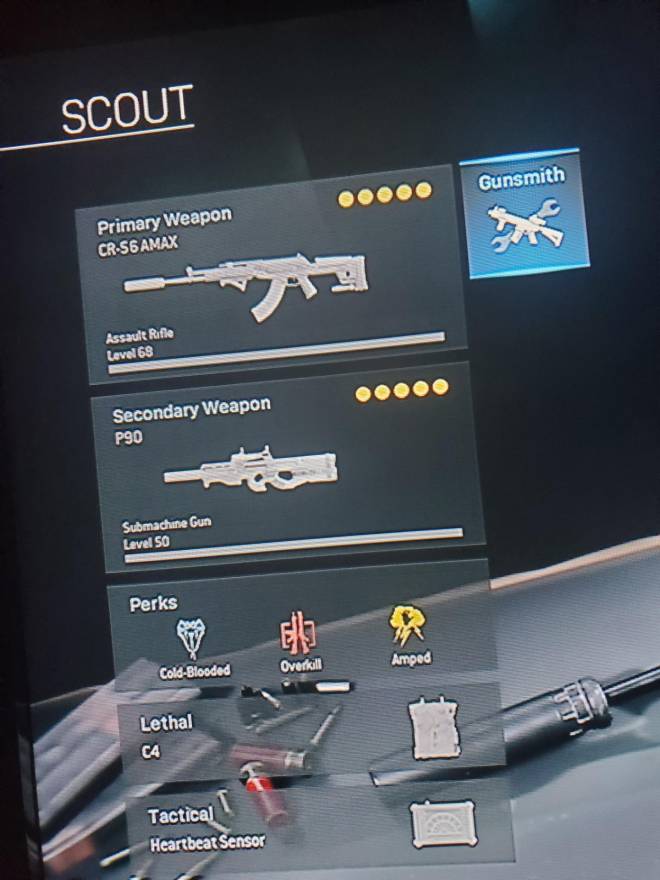 CR-56 AMAX specialized with a monolithic suppressor to assure range and weapon suppression. The XRK Zodiac S440 barrel for increased range during down the field casulties. The XRK Gatekeeper stock for enhanced aiming stability with the weapon assuring lower recoil for head on combat. The Commando foregrip to replace movement spead for accuracy and recoil making sure you hit every shot. And a 45 round mag to top off and make every shot count if there are more than one casulties. Next we have the reliable P90 with a monolithic suppressor assuring range and weapon suppression at its best and a tactical laser sacrificing position while aiming in a dark spot for steady aim. A FSS heavy stock pro for aiming stability in such a small and high capacitated weapon assuring you hit every shot. And last the stippled grip tape for enhanced aiming down sight speed. These two weapons are orignal and reliable for warzone combat. Last we get down to the perks as cold blooded is to remain undetected by A.I targetting systems such as drones of any sort and thermal ops. The overkill perk for holding not one but two primary weapons during your firefight and the Amped perk for reliable and faster weapon swap and, rocket launcher reload speed making sure your enemy does not catch you off gaurd. At the very last we get doen to the most reliaboe lethal explosive the C4 making sure any vehicle or Solider coming towards you will get blown away with a single tap of a detonator if not yielding a trophy system and, a heartbeat sensor to gain advantage on the enemy while seeing their every step. Here is my Call Of Duty Warzone Loadout event loadout. Thank you activision for such a great game.